Yay! A finish on Friday!  But "sniff" as well, because I missed the ALYOF deadline on this project by mere hours.  All I had left last night at 10:20 was about another hour's work...and then to blog about it, so make that probably two hours, knowing me.  Because I was again going to Mysore yoga for 6:30 this morning, I was going to be up before 5:30, so I thought, nope, ain't gonna happen; I need sleep.  What did happen yesterday besides a long but good meeting with our financial advisor, was dropping off all our stuff for income taxes.  Normally they're due April 30 in Canada; because of some glitch, the deadline has been extended to Monday, May 5.  Glad all that money stuff is out of the way, but it interfered with meeting this particular deadline.  Ah well, so I lost out on some possible prizes; I won in the new placemats division, right?

This morning I set to work on them as soon as my "had to" list was done, and an hour was all it took. 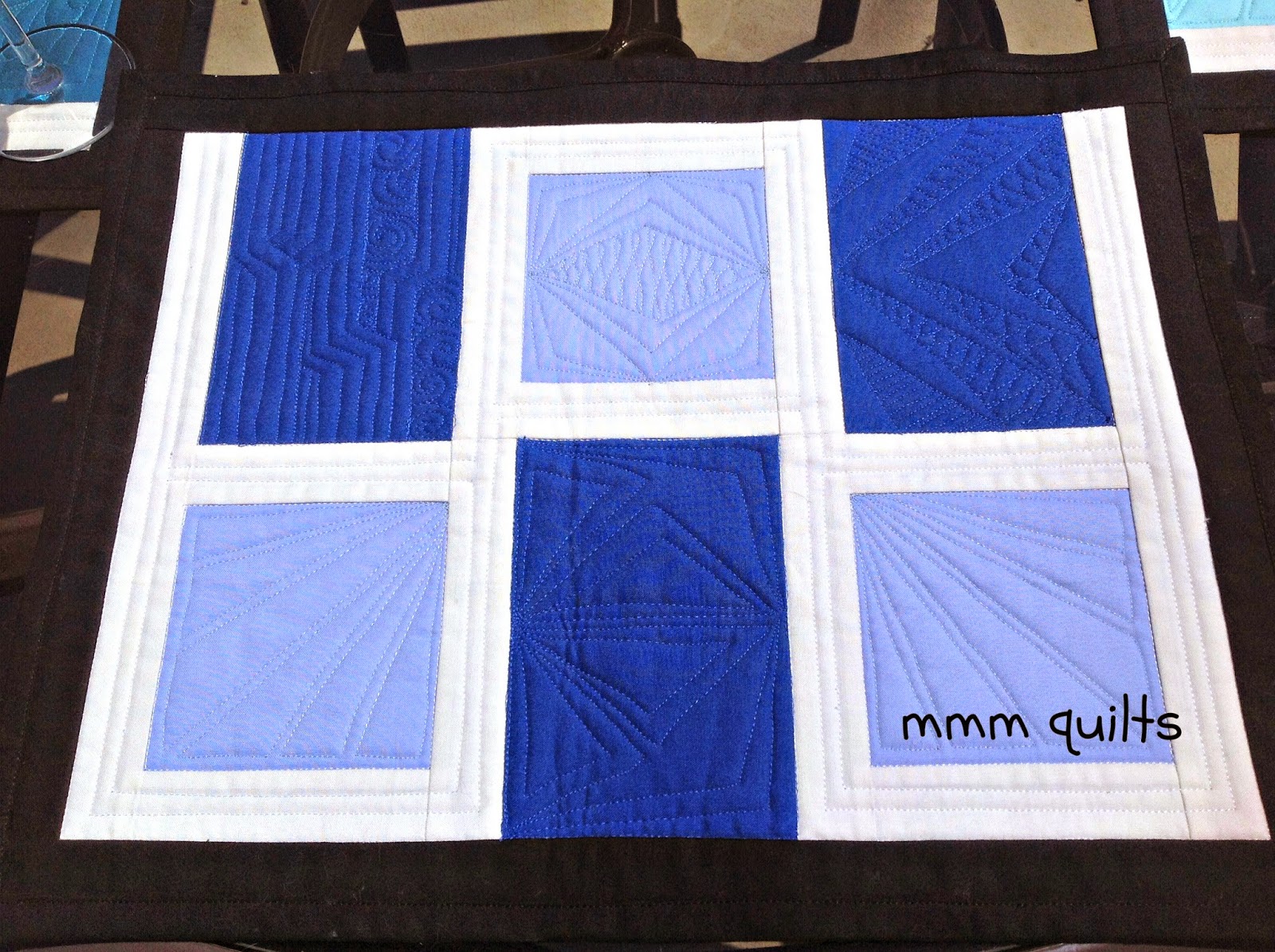 I worked on the royal blue sections in the Dot to Dot class I took last week with Angela Walters (in case you missed it, not on Craftsy, but in person).  The Merged Lines design (top left) I did at home. It's out of her Shape By Shape book, but she did show a group of us how to do it during the class. The designs in the pale blue squares are ones she showed us in class, but I stitched them at home.
Remember that weird-looking triangle design that I nearly ripped out?  I'd mentioned in that post if I added in something symmetrical (one of her many tips) on either side, maybe I could salvage it?
I did a different filler in the four "mountains": pebbles, ribbon candy, wishbone and then back and forth lines.

Here are the green placemats.


I did all four on my Bernina (which is now, woot woot, dropped into my IKEA hack sewing desk, yay).  I don't have any rulers to use with a DSM, so these were all FMQ, no walking foot except for the lines in the white sections.  For the longer lines I used my Hera marker to help guide me.  They aren't perfect, but, as Angela said over and over, FMQ is NOT perfect.  I just LOVE the design in the lower mat, lower right square; I used it several times on Shamrock.  But I also love the design in the opposite corner, the aqua rectangle!  That is actually a border design from Shape by Shape but I thought it could work in that rectangle.  I added one more echo of triangle shapes.  Need to do this on a big quilt!

What do they look like on the back?
I used the same thread in top and bobbin, Isacord for all of the FMQ; white Sulky rayon for the walking foot quilting, and Robison Anton black rayon for stitching down the self-binding.  I think that's what you call turning the backing, which is cut 1" bigger all the way around, folding it twice and stitching it down. 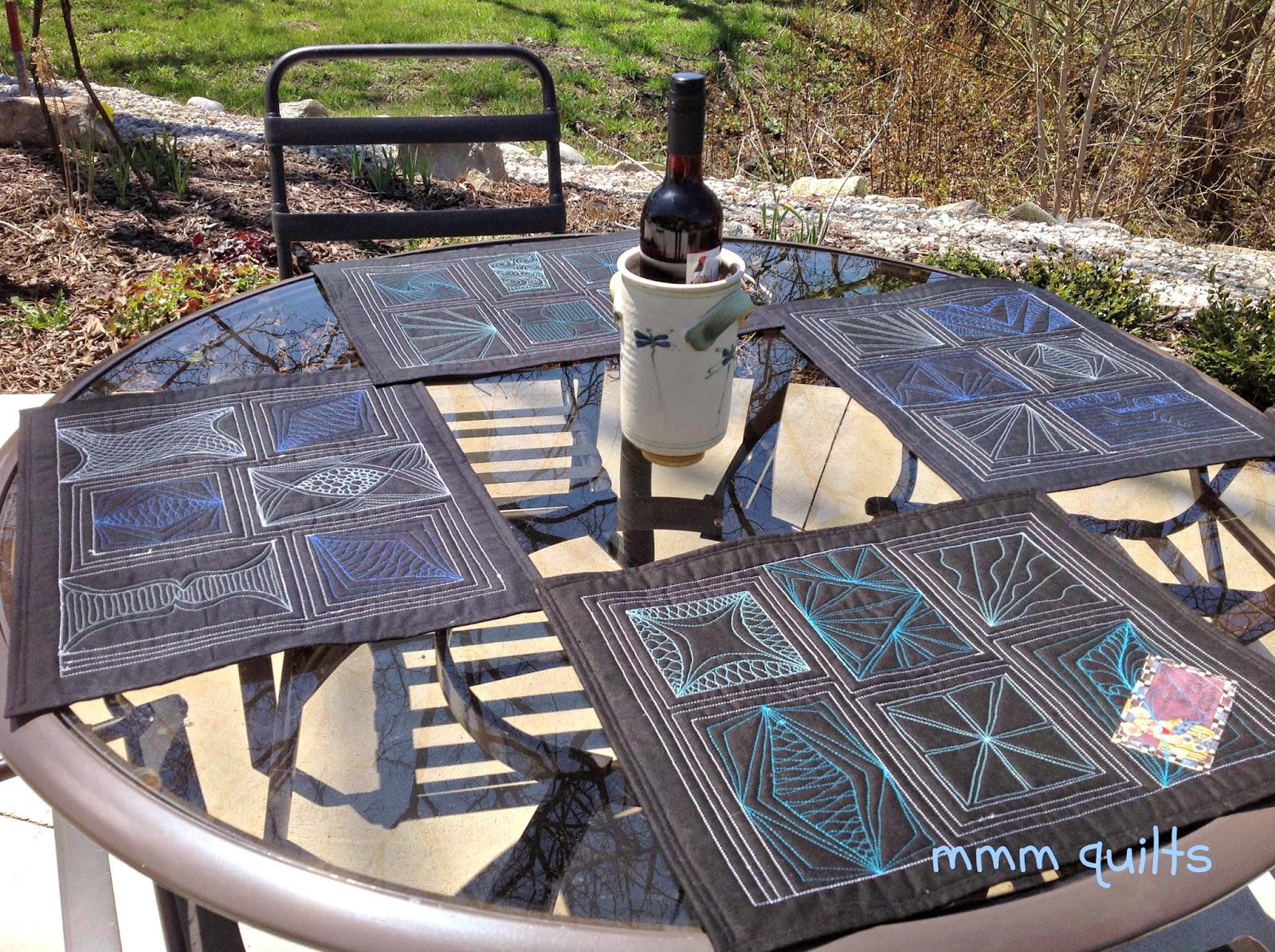 Think the angle is a little better here...whatever; they just look so cool!  btw that's Pelee Island wine sitting in the Ann Arbor, MI pottery wine holder, just had to point that out.

Bella is happy to be directing my sewing efforts in the "up north" sewing space. 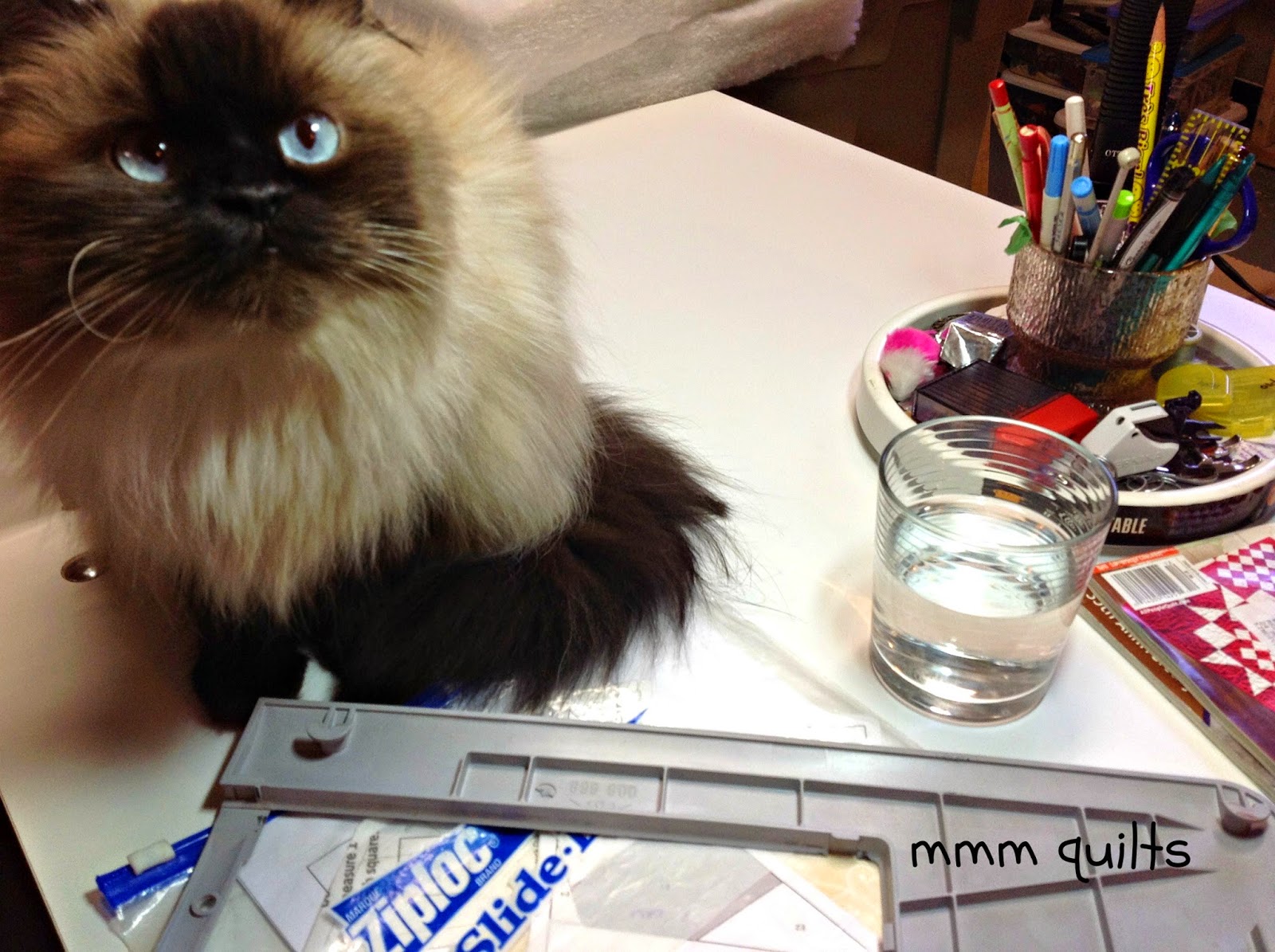 The lake and the temperatures were absolutely beautiful today, about time! 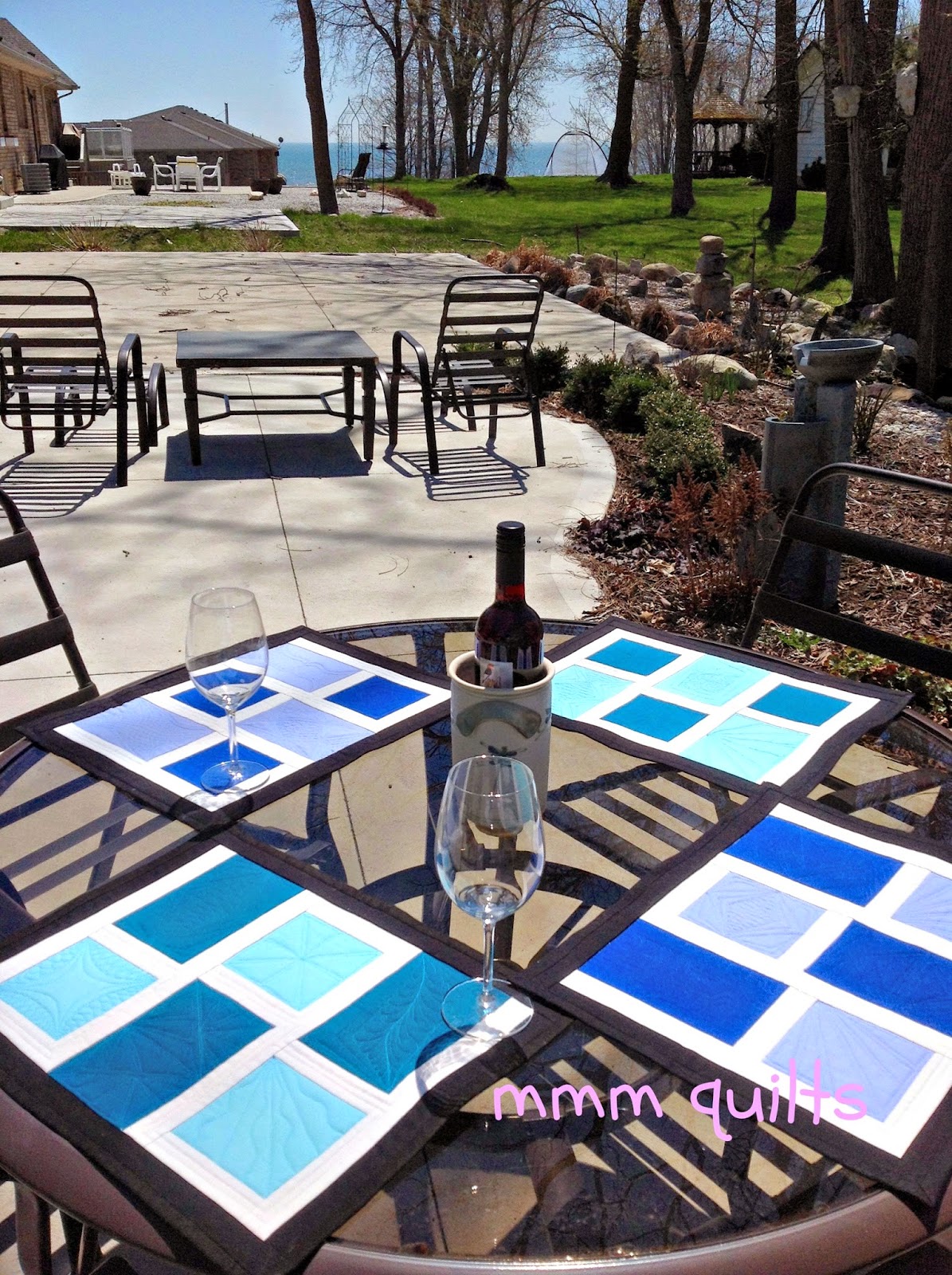 Once I wash these babies up, I'll take another picture or two...maybe in the shade!

Our daffodils are way behind everyone else's but that is because Joe only planted them last Fall, so they're just babies.  I'd forgotten he'd done that; what a nice surprise to come home to! 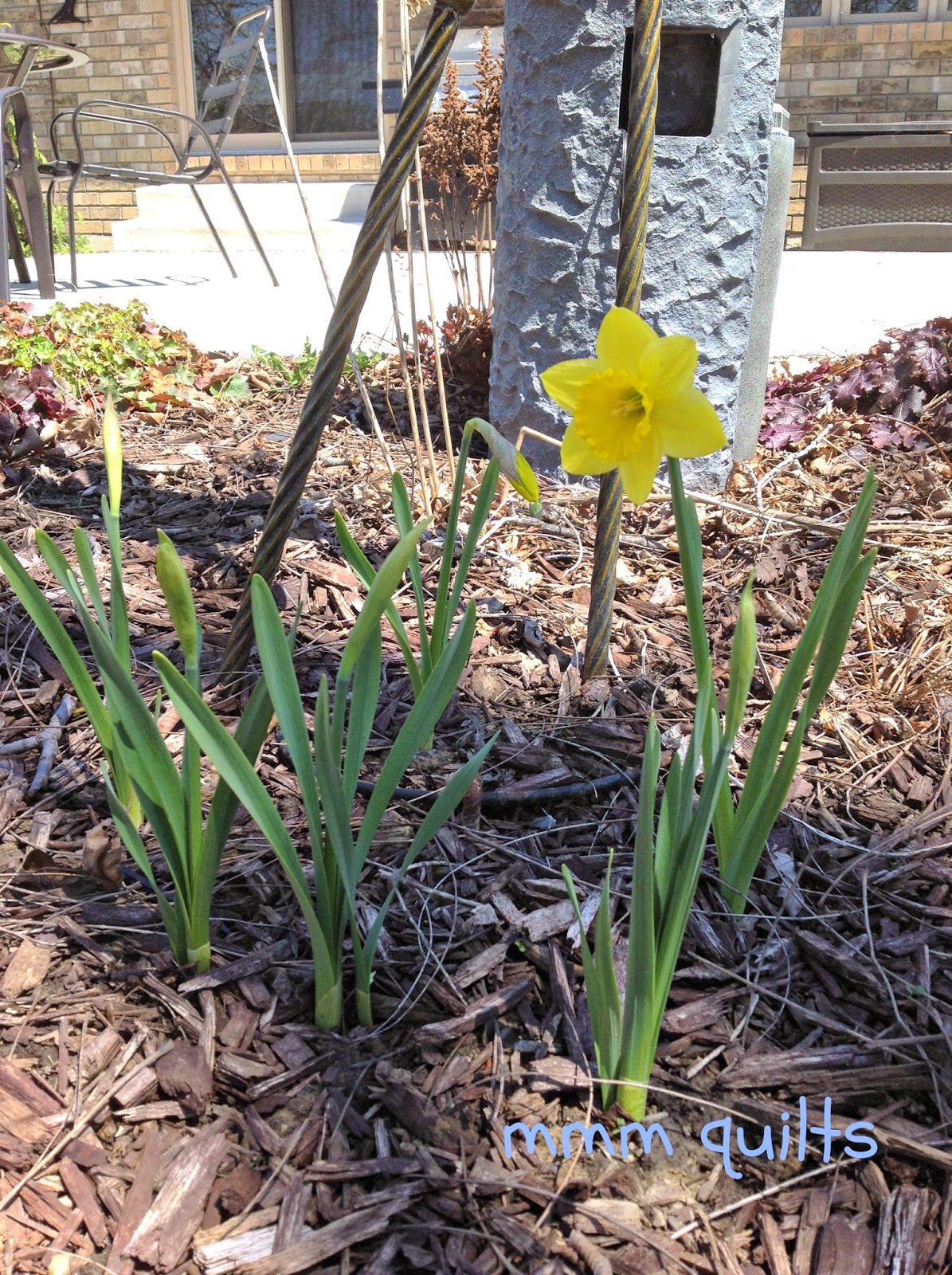 Linking up with Crazy Mom Quilts, and TGIFF

Posted by Sandra Walker at 7:18 PM