Or Catch-up! However,  ketchup, which I really like, is red, and red is the RSC2018 colour for July...see the crazy way my mind works?!  I got my red blocks done over a week ago, super-early for me! 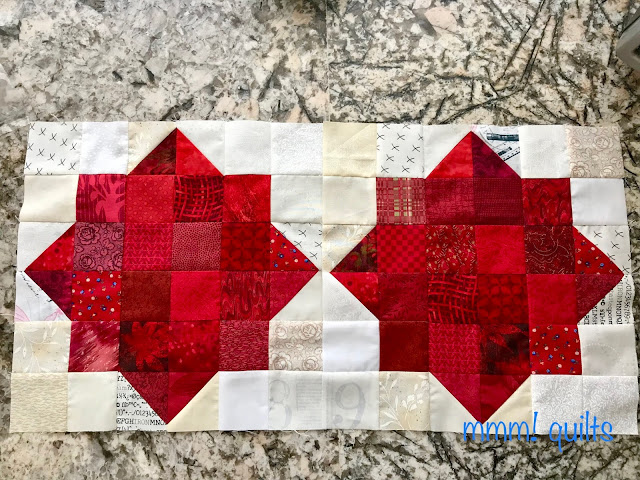 Once again, I love them. Memories abound, both old and new, probably the main reason I love scrap quilts so very much.
The other catch-up is actually staying caught up with, the Fireburst Mystery QAL at Tish N Wonderland. 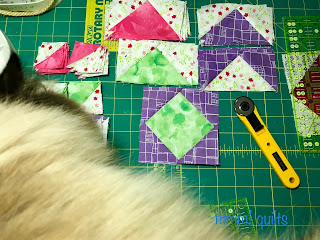 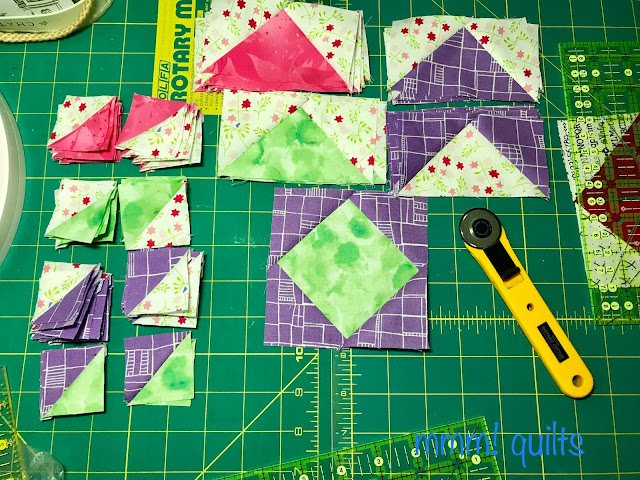 Loving the fabrics together! Not loving, I'll be honest, all the cut off triangles you see on the left side...I detest waste, so I'm sewing them back together, thinking they'll become a cushion cover perhaps, or a part of the back for this quilt.

44 of 'em alone with just this step! I like the No-Waste Eleanor Burns' style of flying geese. Which way do you prefer to make geese?

I've jumped in officially  this year with Homesewn By Us second sew-along. Unofficially I'm in the one from last year, but I haven't started yet, LOLOL. Roseanne has the most relaxed ever QAL, and I'm good with that. I'm going to make that Regatta quilt yet, Roseanne, really, I am. Blues and greens yep. For this year we have a choice of three, all free online tutorials. 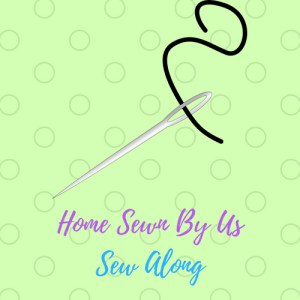 Well, you could've knocked me over with a ketchup bottle, no just the lid even, when I clicked 'Up From Here' and saw it was constructed in six columns, exactly like the method I thought I invented for Plus Playtime!!
Well I never!! Alyssa put her block on Sew Mama Sew in 2013, judging from the Flickr group, and I invented mine four years later, never having laid eyes on hers. Seems we all tap into this creative pool I've alluded to more than once! Now, I'm not providing excuses for those who steal others' ideas and patterns without buying the patterns, and those who go further and make money off the sale of quilts from those stolen patterns, or worse yet, cases where some have passed off others' work as their own. I have zero tolerance for that. That's another blog post though ha. But it's fascinating in a wee-ooh-wee-ohh Twilight Zone way how ideas can be so similar and the two have never met. It happened to me earlier this month (egad! so that's twice within a couple of weeks! Things come in threes...) anyhow: a pattern released by Allison Harris at Cluck Cluck Sew and a block I drew back in March of this year, which has been accepted for publication of a quilt in a magazine for next year, are so similar...

Anyhow, I find that 'other level' of our brains, some call it the sixth sense, that connectivity we have with each other, especially with those of like minds or passions, just so fascinating. I talk a lot about energy in teaching Yin yoga, energy flow, moving energy with our breath, the energy pathways in our bodies, which are electrical, no mumbo-jumbo denying that! But I find our energy field, our soul, our essence, our force field that seems over and over again to attract similar-minded souls to finding each other, just so incredible. I firmly believe we meet these like-minded souls for a reason, a purpose, and that it is on purpose.
I'm joining in with other like-minded souls who love Tula Pink's City Sampler for Angie's @gnomeangel 100days100blocks2018 this year. I made a few of these blocks, two of each, for eventually two quilts, a couple of years ago. I had gotten the book out of the library, renewed it, renewed it again, and then thought okay 9 weeks, honey, think you need to buy that book! So I did. I stalled out not too far along on the blocks though, so I'm hoping that this QAL, like the 150 Canadian Women quilt from last year, for which I did all 150 blocks, will keep me going. So far so good. I will make a collage every ten blocks and post it here so those who do not follow me on Instagram can see what I'm doing. I'm using a bunch of scraps from my Parisville Weave quilt, and some other Tula Pinks I've collected plus some solids.

Anyhow, just my thoughts! Now I need to post my newest finish, yeah, two in one week good grief! And oh, do that draw for all the lovely prizes for Plus Playtime!

Linking up
with Angela at soscrappy
Posted by Sandra Walker at 3:27 PM