Welcome to another month of Throwback Thursday. How can it be that the 18th year of the 2000s is past the halfway point? It floors me how fast the time goes. My dad always said how when he was a kid, the days dragged until the weekend, and the weekend was over in a flash. He'd say now that he was retired, the months go by like days, entire seasons fly by as a month used to...

And I know all too well what he meant! 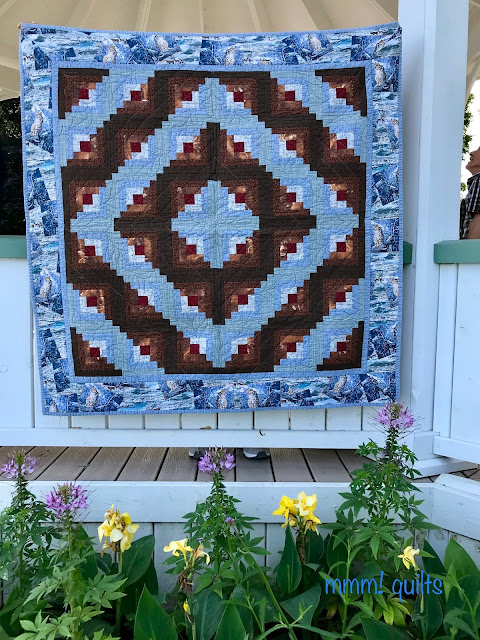 He's been gone now ten years and I miss him still, our rendezvous at Kennedy's Coffee Shop, our lunches at Simple Pleasures, his humour, his stories, his love for his grandchildren, his love for his country. You may recall from last year's QAL, my first one, Freefall, that he used to write on the new calendar, "The Birthday of a Famous Canadian" on June 15. And snicker. As would we kids. And Mum would roll her eyes with a half-grin on her face.

So I thought it fitting that I photograph the quilt I made him in 2001 for his 75th birthday in a beautiful spot in Canada, Niagara-on-the-Lake, Ontario. It's not his beloved Alberta, but I think he'd approve. 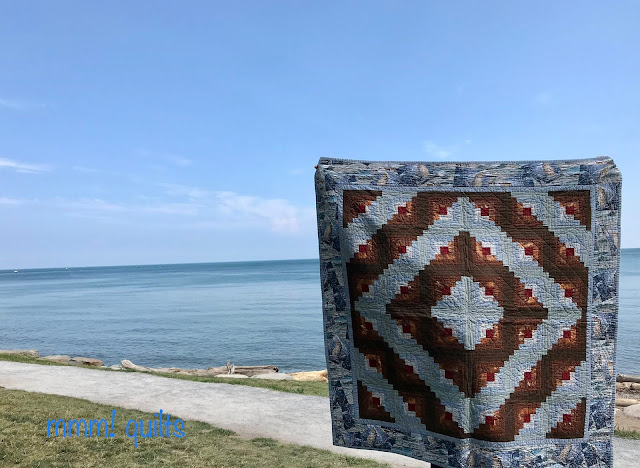 What a perfect spot to photograph quilts! Behind my trusty quilt holder is another one of 'my' Great Lakes, Lake Ontario. Far far away to the north, on the horizon, not visible because of the width of this lake, which is 85 km at its widest, is Toronto.

Allow me to show you a collage of our view as we crested the hill from the parking lot.
Pretty picturesque no? And there is one of us, Preeti, of Sew Preeti Quilts, and me! We had a great weekend in Niagara Falls (American side) and Niagara-on-the-Lake (Canadian side) of the Niagara River, which you see in the top right photo. I'm standing in Ontario looking mostly east, and that is Fort Niagara on the promontory in New York!

Back to my Dad's quilt: 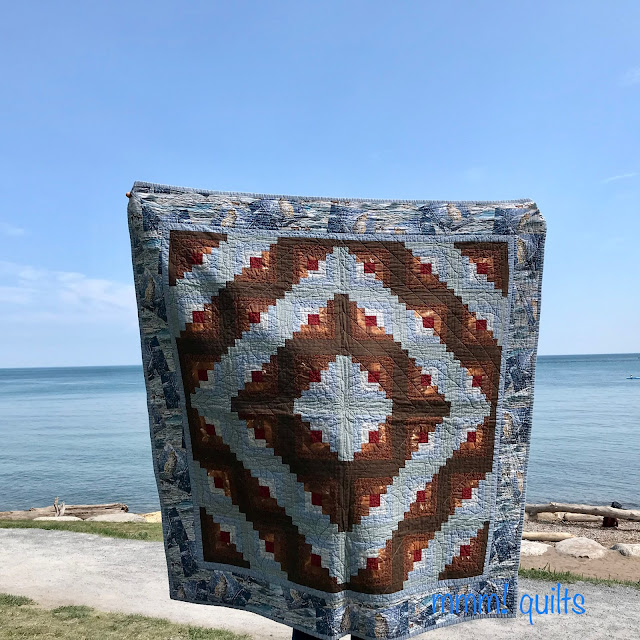 My dad, the eldest, was born in a little French town in Alberta called Legal, pronounced Le (not lee) and gal as in girl, emphasis on 'gal'. His dad, my grandpa, was a hired hand on farms during the first years of my grandparents' marriage, until they could afford to buy their own piece of land, which had a small log cabin on it.

So obviously I knew I'd make him a log cabin quilt. From my notes I used to keep about some of my first quilts, I wrote that it's set in the barn-raising set, because he grew up on a farm. The centres of the blocks are red, which symbolizes the heart, (love, warmth) of the home. Blue was his favourite colour, so I used three of them, brown for the logs, used three brown, and a nature print for the border with both colours in it made up the palette. I realize now that Dad influenced my love, respect and passion for nature; he had a longtime subscription to National Geographic, and watched many nature shows, the theme of one, The Nature of Things, I can still easily bring to mind. 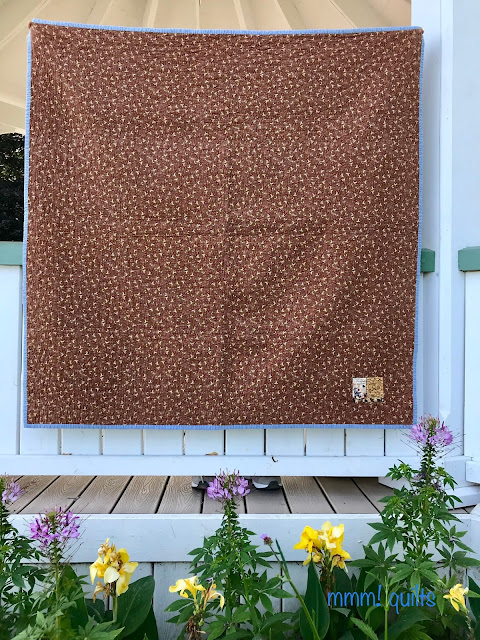 Thus, a soft brown flannel for warmth went on the back. I remember finding it on a quilt guild bus trip but I don't remember what shop, and I didn't write down any fabric details. I do know the blue trees fabric is SSI (South Sea Imports) because I have a bit of it in green still!

For the quilting, I used all Sulky threads.😍 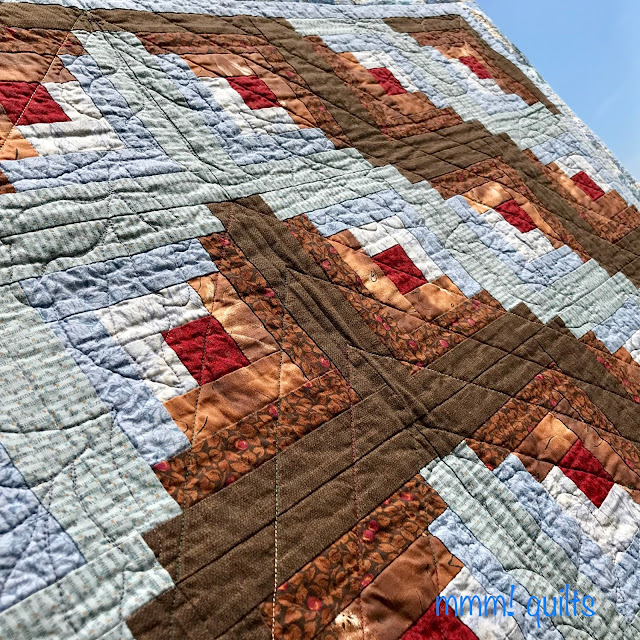 I'd done a fair bit of Stack 'n Whack quilts (Bethany Reynolds' kaleidoscope method), both teaching and making, and I'd been doing some fancier FMQ on my domestic, a 1979 Elna Air Electronic. The leaf pattern is one from her book she provides. I made a paper template, traced around it with the Clover chalk markers (that suddenly seem to be back in popularity!) and then followed the outline with FMQ, and FMQ-ed the stems freehand. I used a Sulky grey rayon here. It filled the blue diagonals well. You can see I did walking-foot quilting with a Blendables thread in the brown areas.

In the border I used a Sulky metallic in silver: 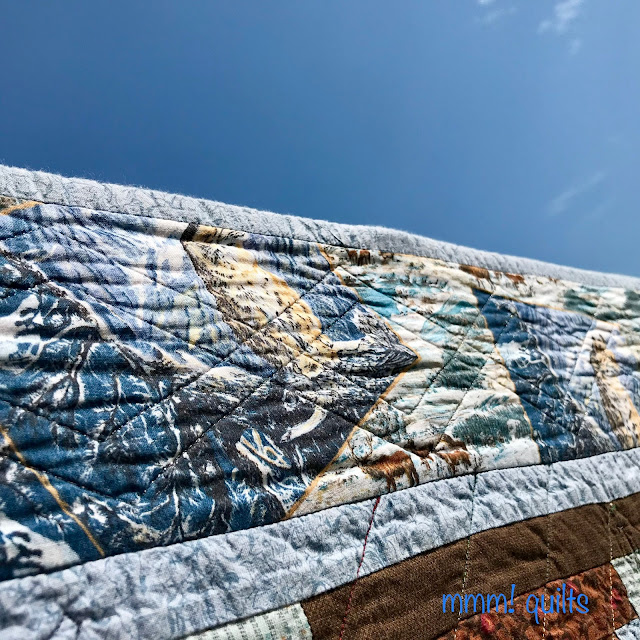 I did this design by making large and a small diamond templates and tracing around them. I used the edge of my walking foot to echo the 1/2". You can see I ignored the inner border, extending the log cabin quilting designs right across it.

I bound the quilt with a 1/2" wide binding, quite a bit wider than I do now, 1/4"! The binding and the inner border is the same fabric as one of the blues in the log cabin blocks. 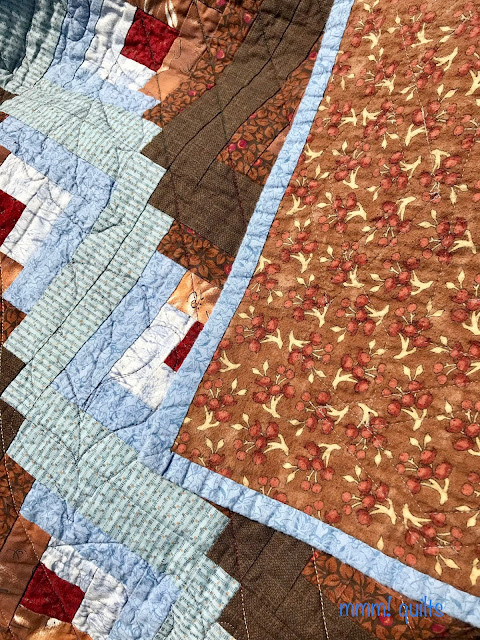 The quilt is still in perfect condition. I brought it home with me when I was out there in May. It will be passed on to either Dayna or Brady, who will inherit all my quilts.

While we were doing our quilt shoots....
and skipping stones.... 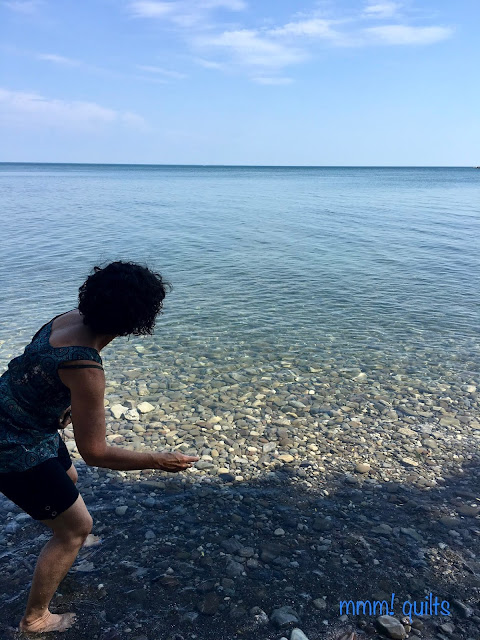 ...I made sure to get a kind person to photograph Preeti and me with the H2H quilt I made: 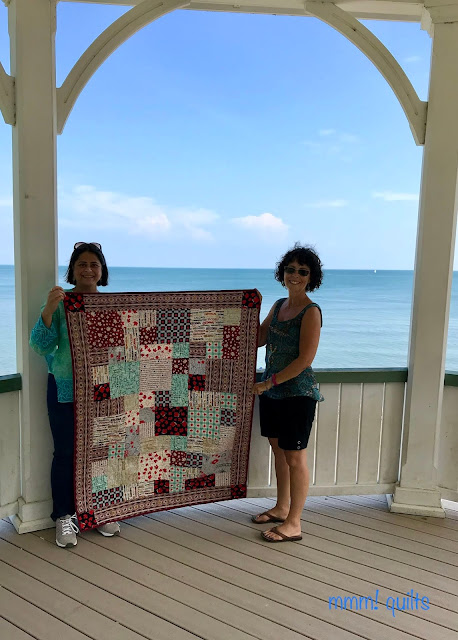 Full disclosure: I haven't given this to the Syrian refugees in Windsor yet, but I have a friend with whom I had coffee last week who is the director of the Children's Aid Society. She has direct contact with refugee families, as they help them adjust, and in conversation with her, I learned that she can give my quilts directly to a family in need. I still won't know who, as confidentiality is #1, but I will now that they have gone to a refugee family in need. In the past I gave quilts to the Muslim mosque and school, and also some H2H quilts to the Sexual Assault Centre, which will get the second H2H quilt. How is Preeti connected to this refugee quilt? Well, other than being an immigrant herself, she gave me a $25 gift certificate she'd won from Sew Sisters Quilt Shop in Toronto. The cost of postage, she said, made it prohibitive. I bought Canada 150 fabric with it, adding to it with my own money, and made this quilt, which uses the Humboldt Broncos block btw. 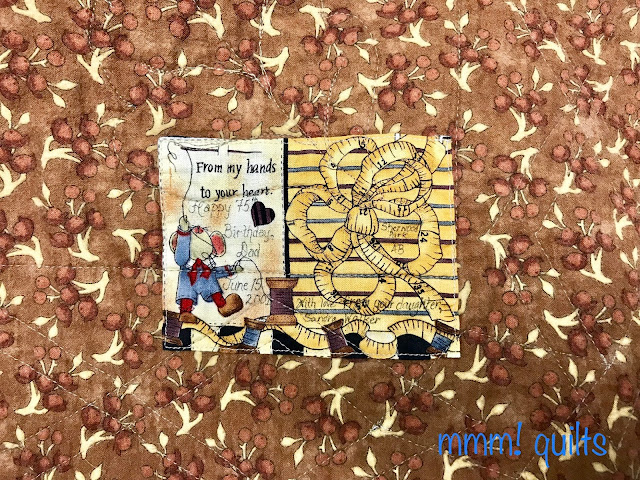 I didn't usually name my quilts back then. The Pigma Micron pen has held up very well. I just love a flannel backing, so cuddly! 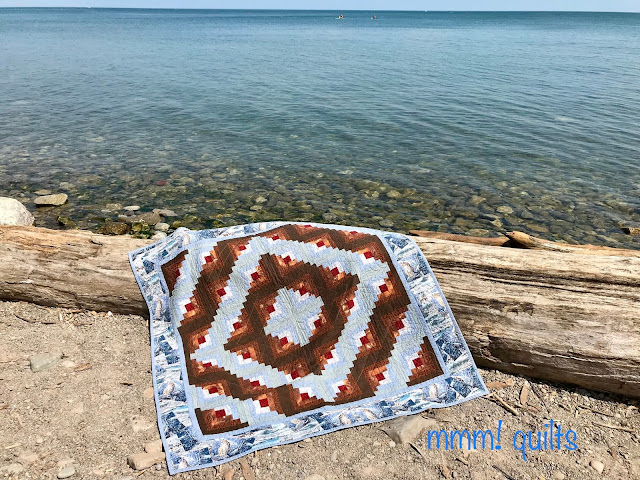 Sorry for the delaying publishing this post; trying to put my hands on the two old photos I knew I had somewhere, took a bit longer than anticipated. And then there was a power outage as a storm went through...all good now.

Linking up
My Quilt Infatuation