This is the second quilt I made for Sarah's Hands2Help charity quilt drive at Confessions of a Fabric Addict. It's also my finished quilt for Roseanne's No Stress Sew Along at Home Sewn By Us. It's also on my Q3FAL list which is here! 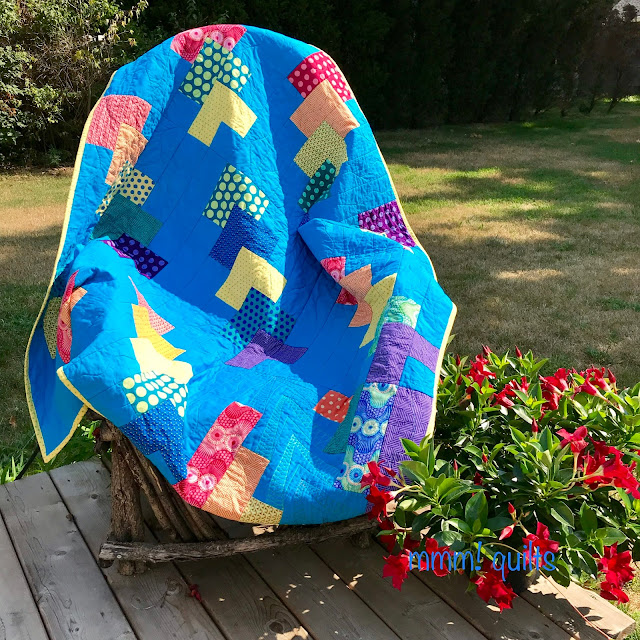 The pattern is a free one off Sew Mama Sew and was one of Roseanne's three choices you could do for her SAL. It's designed by Alyssa of Pile o' Fabric. I had the flimsy done back in July, and the quilt in the first few days of August during my blog-cation.

This quilt sews up super-fast, much like my Plus Playtime quilt (I know, I know... the pattern should be published within the next week or two, some exciting stuff happening in that department). I used up the last of the Dot Crazy fabric and some turquoise Kona. Unfortunately I was short of turquoise Kona.  However, with some creative piecing, I had just enough, I mean just, to make a reverse image block, which you may notice in the lower right corner.  I thought with some creative quilting in rainbow colours, I could make it work with the 'arrows' or upward feel of the block. 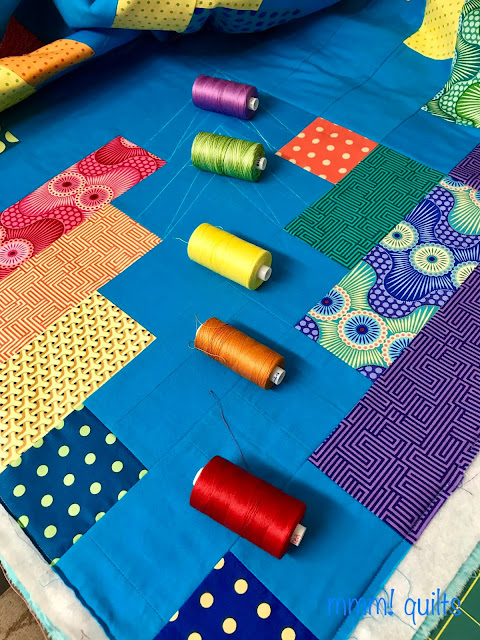 I actually altered the size of the quilt to make 18" blocks rather than 24" ones, as I knew both the Kona and the scraps of Dot Crazy would be tight.
I used my Clover chalk rolling wheel marker to draw in the dot to dot idea I had to see how it looked. That photo shows, if you look closely, all the extra seams I had to get do to stretch this fabric! The quilting and then laundering hid it all though: 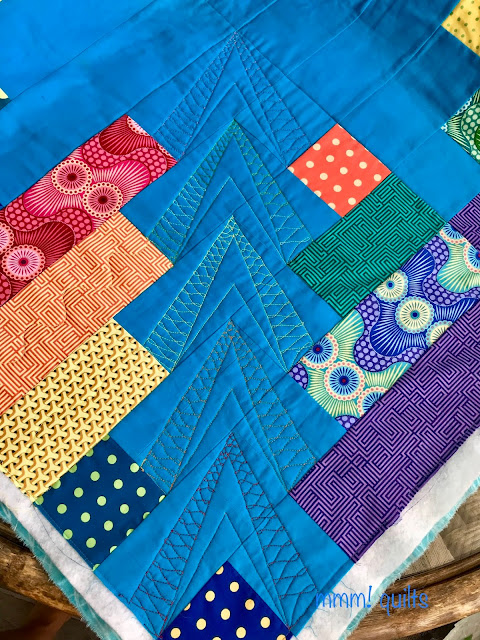 Wish the colours showed better on the photo. They really pop in real life.

Here's the entire quilt. It was freshly laundered here. I laid alternating blocks out in rainbow colour order. In row 1 it's the centre block, in row 2, it's the first and third blocks, etc. 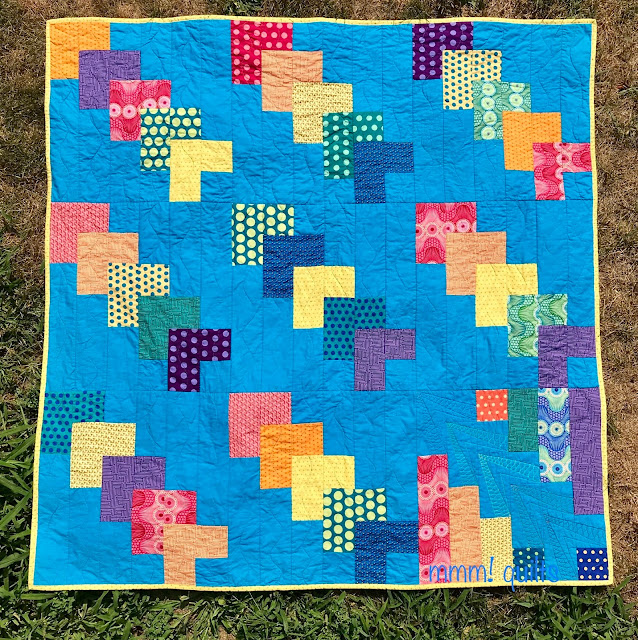 I kept the quilting simple: ditch-stitched in all the vertical seams, and horizontally between the three rows. I then did an organic wavy line down the centre of each column. All that was done with a Coats and Clark turquoise rayon thread which sunk in nicely after washing and drying. This was when Avril was down for the count with her timing issue, so it was quilted on my Bernina. 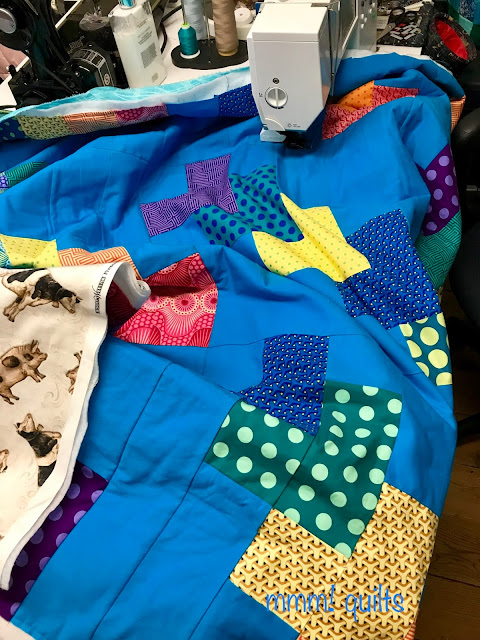 Here's the entire back, two pieces of fabric. Why cows? 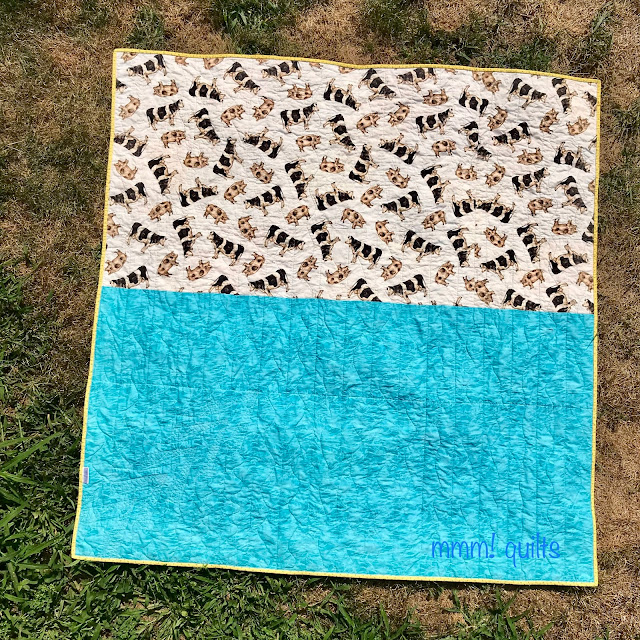 Why not?! I had a sizeable piece of Farm Chic by Windham Fabrics left from my aunt's "C'Boss!" quilt, and they just seemed whimsical with this bright front, and immediately "moo-vin'' popped in my head, a pun on Moving On Up, which is related to Up From Here, and so it just had to be. The turquoise is a piece I bought from a de-stashing friend that worked well with the turquoise on the front, also from her. Bright yellow polka-dot from the Dot Crazy line, left over from the original Plus Playtime quilt that was in Modern by the Yard, January issue, made a bright binding. This quilt went to the Sexual Assault Centre in Windsor for a child or young adult, so I wanted it bright and fun as well as cuddly. 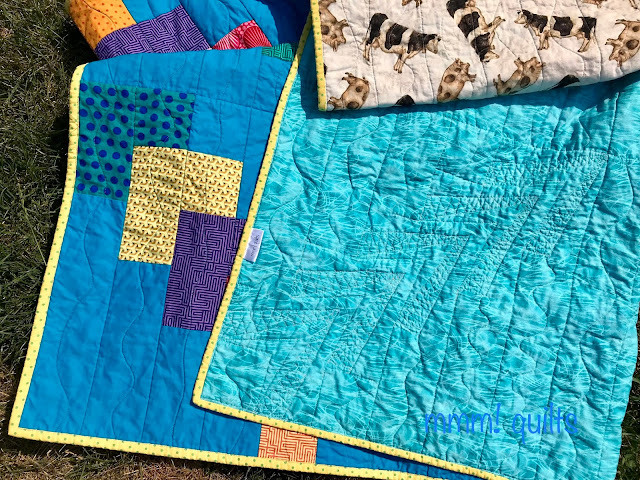 I actually remembered my satin label before applying the binding, LOL. I wrote the name of the quilt on the back of it.

One last shot:
Quilt Stats
Pattern: Up From Here
Size: 54" square
Fabric: Kona turquoise and scraps of Dot Crazy by Contempt for Benartex
Batting: a no-name flat polyester
Backing: stash
Quilted: on my Bernina, FMQ, ruler work, and walking foot
Threads:  pieced with 100% cotton Gütermann and Mettler on my Bernina; quilted with Coats and Clark rayon and Essential cotton 50 wt

Linking up
Cooking Up Quilts
My Quilt Infatuation
Quilt Fabrication
Dizzy Quilts for the Q3FAL
Posted by Sandra Walker at 6:30 AM