I am on a roll! Two challenge pieces done well ahead of time! This month the challenge came from Aurifil, "to use any fabric art/non-traditional quilting/sewing/thread-painting technique using three Aurifil thread weights." We were to include three photos of how weights were used. Photos is never a problem for me! 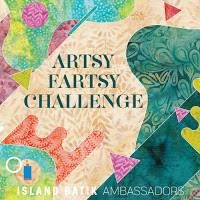 All of the fabrics, threads, and batting were provided to me by Island Batik, Aurifil and Hobbs, respectively. Allow me to walk you through the process that ended with this not-square, not round, not oval quilt. 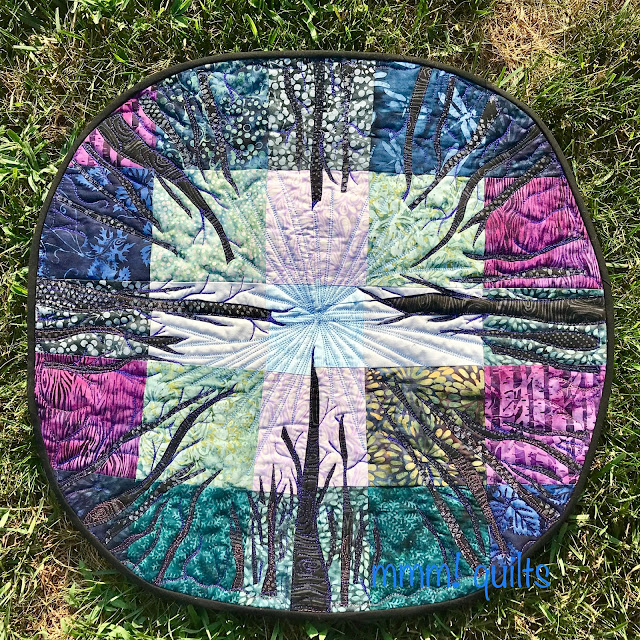 I had a few ideas for this Artsy Fartsy thread challenge. One that really was sticking with me was to make individual leaves, quilting them and add them to an art quilt about trees.  I just love trees. I have for a very long time. I think it became apparent just how much during a 1994 trip to BC where I got to walk a bit in Cathedral Grove (not enough though: dogs, little kids, a narrow winding highway, wanting to be off it by dark, all contributed to the hurried visit) and had my soul quite literally touched and forever changed by the ancient, giant Douglas fir trees there. They had such presence. Some more than 800 years old, all they had witnessed and been present in the world for!!!

Anyhow, the trouble with making leaves was, my greens are extremely limited and that's over the course of receiving three boxes of Island Batik! In a brief email chat with my 'boss' at Island Batik, Kim, I jokingly said, "Well trees can be purple right?" and that sparked the idea of doing a night tree scene.

I've always wanted to do a piece that seems like I'm lying in the grass, looking up at the sky with the trees all around. I actually have a colourwash one started from oh, just a few years ago. Although I've been gone for seven years now, having lived in Alberta most of my life where, at 53N latitude the sun is setting at 10 pm right now, no lie, and the light will stay until nearly 11, I knew the centre had to be quite light, while the trees would be silhouettes against the magentas and midnight blues of the outer edges of the sky. I've actually sat, not lying prone in the grass at night, ha, many a time, watching in fascination the bats wheeling and dipping and gliding as they feast on mosquitoes...

I started with a traditional block, a 25-patch, using only the 5" stash builder strips but for the rich green, which was leftover yardage from my Luminous Layers quilt. I cut the block in four to insert trees at those points.
I had inspiration from doing a Google images of 'trees at night' but the one that really grabbed me is here. Yes, it's a shower curtain, and yes, my friend Helen in Arkansas, it's from WalMart! (gulp) I had the idea that I could keep cutting this 25-patch up, inserting trees, knowing it would get smaller and smaller. I also knew it would certainly be non-traditional quilting!

I am not an improv quilter; I don't even do that well with making slabs, and do not find that activity relaxing at all...

I was not happy with that centre, but I figured I could lop it off. I love my lower half tree; it's perfect how it soars upward. I liked how the 25-patch block was starting to bend.

I sewed the two halves together, still not happy with the centre...but 'I'll figure it out,' I thought. 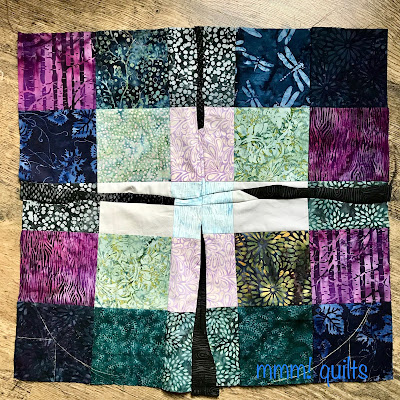 You can see my basic chalk sketch (enter pizza pan and 2.5" marking at the corners), pretty organic.

Here, instead of keeping slicing and inserting trees, which might've caused this to be a pointy hat lol, I decided to do another non-traditional quilting, less stressful technique: crafted appliqué, a method developed by Lara Buccella. Her ingenious technique made my feeling of 'ack-pliqué' change to 'ahh-pliqué', (she quoted me in her introduction). So, I grew my forest, for which I used three different black 5" stash builder strips, just free-form cutting tree shapes, some with branches some without... 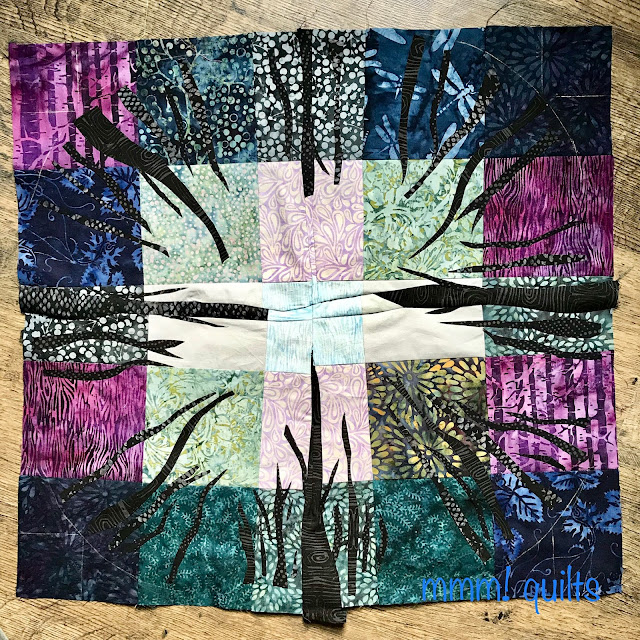 At the point above I layered it with Hobbs Thermore, the last of it... oh, how I love this stuff, and a deep purple batik for the backing. I was liking it more. About this time, I read about the alarming, heartbreaking, panic-inducing (in me) increased burning of the rain forest in Brazil under their new right wing president. There is an informative article here.

So the piece changed from a peaceful, ethereal, nighttime gazing at my friends the trees, to a statement about the burnt shadows of these majestic sentinels that we are allowing to be killed. They haunted me the entire time I worked on this. I have such a feeling of desolation for the fate of our planet, what we are doing, and all for the sake of money. Therefore, no thread-painted silhouettes of leaves, just stark kind of grasping branches.

I went to town, quilting at the same time as stitching along the edges of all the trees with a royal purple 40 wt 1200, and thread-painting branches at the same time. This thread was great for going back and forth to fill in; I sometimes made six or eight, or even more in places, passes. I used Aurifil navy 2745 in 50 wt in the bobbin.
If you look closely, you'll notice that some trees and some branches are fabric appliqué, and others are thread-painted. You also may notice a dusky mauve on some of the trees. This is a 28 wt thread, a weight of theirs I've used a few times before and really like. In my very limited art background (read zilch) I thought of light penetrating from the moon in various spots on the lower forest, so I did some whorls and swoops wood-like right? Another thing I just love is how organic Island Batik chops are.(means prints, but chop is the correct term for the pattern). Notice the tree trunks one, the leaves ones, the flowers, the dots that could be parts of the Milky Way...

What to quilt in the overhead sky.... While I contemplated that, I had a couple of interruptions, Patio Chillin' Table Topper for one, more placemats for Brianne (she decided she needs six) and the start of some for Dayna now too, oh, and this week's Tiny Tuesday block. All those squirrels! Guess the trees attracted them!

I thought of light, and what it looks like at that 10-11 pm time (magical) far north in the summer. I really wanted to do circles with 12 wt, but was not about to break thread 5000 times. I also wanted to disguise the centre. So I thought of rays, but softish ones.
The other colours and varying weights I'd been sent were a fairly intense turquoise, a yellow, a cheery pink and two other blues, one a sky blue, the other a slightly greyed turquoise. I wanted to try out their 12 wt as I've used the Sulky 12 wt quite a lot. The sky blue one would have to do, so I popped a Schmetz Topstitch 90 into my trusty Bernina who, as I said on Instagram, chomps up whatever thread I feed her, and she loved this one. Topstitch 90 is a great needle to use for 12 wt thread, and I back off my top tension to 1.5. 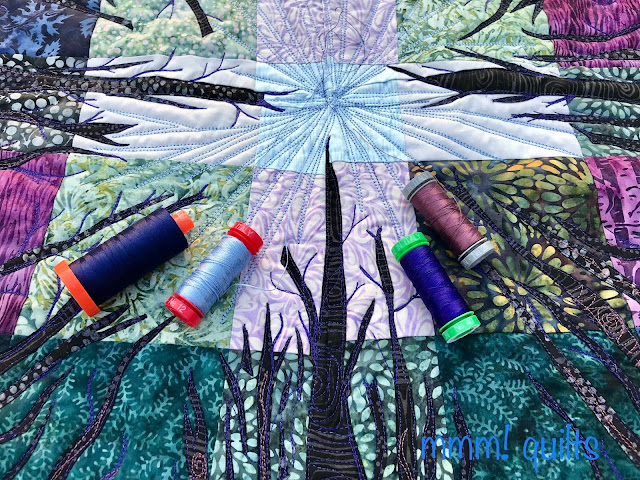 I made a bias binding with the solid black batik we got in our first box this year. I actually didn't worry at all about it being symmetrical when I did the final trim. Here is the back, that lovely 'snakeskin' rich purple I got last year. I sewed the binding onto the front and hand-stitched it down onto the back with the navy 50 wt. I didn't get any black thread, so in keeping with the challenge I used only Aurifil and only what I'd been sent! 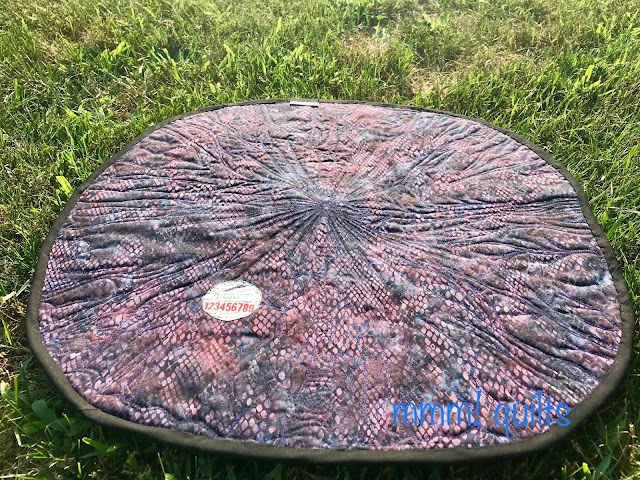 You can see my mmm! quilts satin label, a new one, at the top of the quilt in the above photo. Here is a closeup of the cloth one: 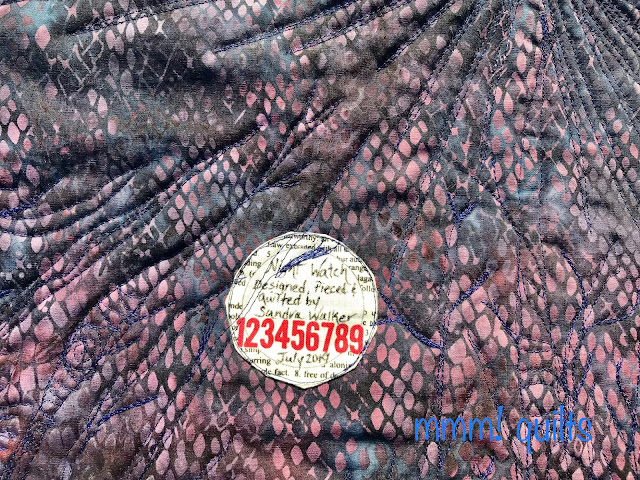 Ha! one of the tree branches happened to get thread-painted there. You can see the great tension I get from my Artista 180 from 2003. There are three weights of threads on the top, 40, 28 and 12, and the 12 is light blue, and you don't see a single pokey!

A better shot of the one side of my new labels from Ikaprint. The sun picked up the threads so nicely here too. 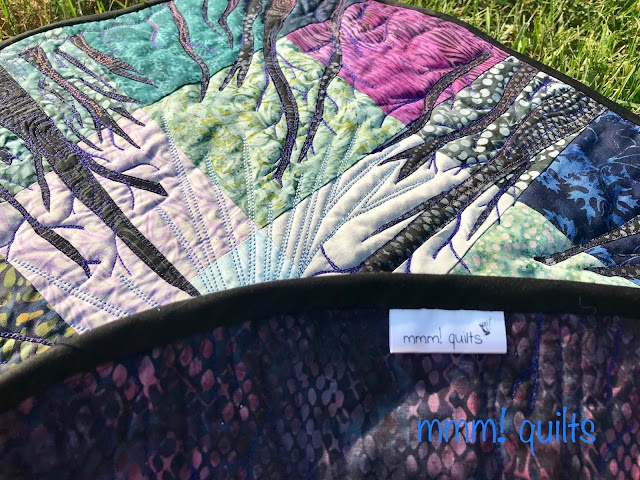 The quilt is not evenly quilted, but it isn't symmetrical and, well, neither are trees, so I'm okay with this. I did contemplate making a craggy edge, but opted for the smooth one in the end. I have a PDF saved for when I make a sleeve for hanging a round quilt using a Hangitdangit. Of course, I could always go get the Scotch tape for concrete brick and grout, and hang it anywhere I feel so inclined, thanks to Laura's tutorial.

Love it on the grass! Rather à propos I'd say. However, I have a feeling of melancholy now when I look at it. Quite the change from that first 25-patch I cut into four! 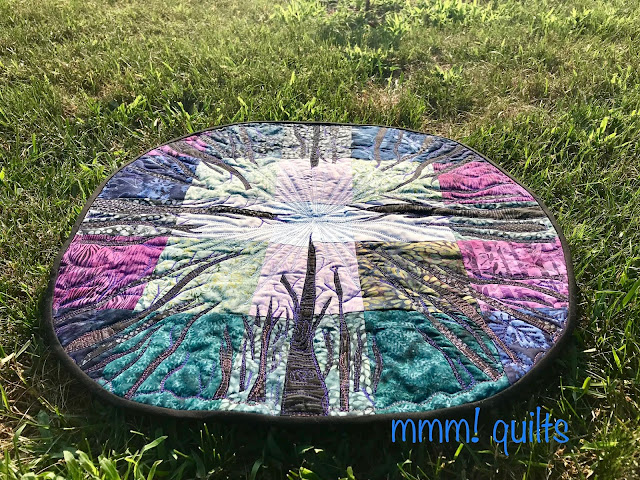 Linking up
My Quilt Infatuation
Confessions of a Fabric Addict
TGIFF at Chris Knits Sews
Busy Hands Quilts
Posted by Sandra Walker at 3:00 AM