One of my Q2FAL goals was to make two more cat mats, and on the last weekend in June, I completed the goal. My Q2 list is here. 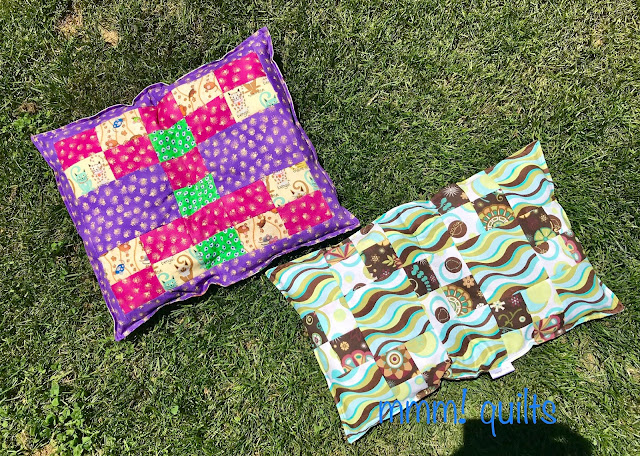 These will go to the Leamington Kittenaide Program which is an organization of foster homes for cats and kittens in Essex County.

I made the pink and purple one first with scraps, most of which were given to me by a friend. There are some scraps from previous cat mats in it too. 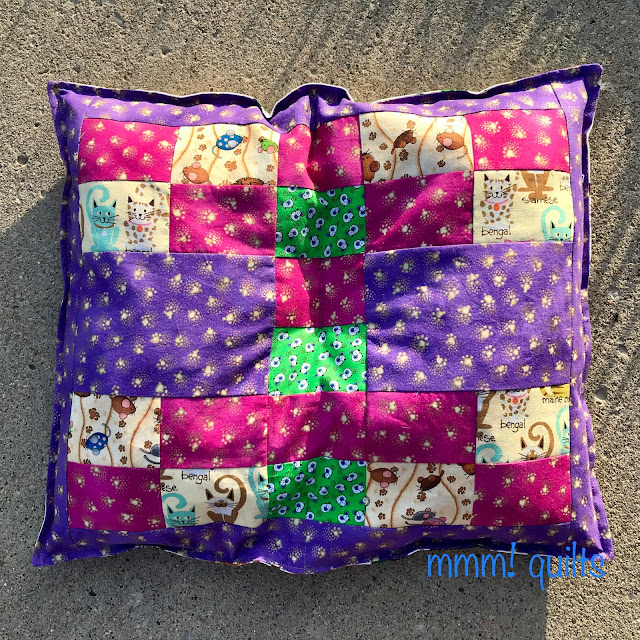 I sewed merrily away between making football blocks for Brady's quilt, and it wasn't until I had the backing sewed on and flipped right sides out that I realized my error... sigh... Ah well, a cat's tushy is not going to mind that three pinks are together because I put the 4-patches on the wrong sides of the centre strip. This one measures 15 x 18". I usually make them 12X18" but the rectangles for this were mostly all cut when I got them, 2.5 x 3.5" so I went with what I had. 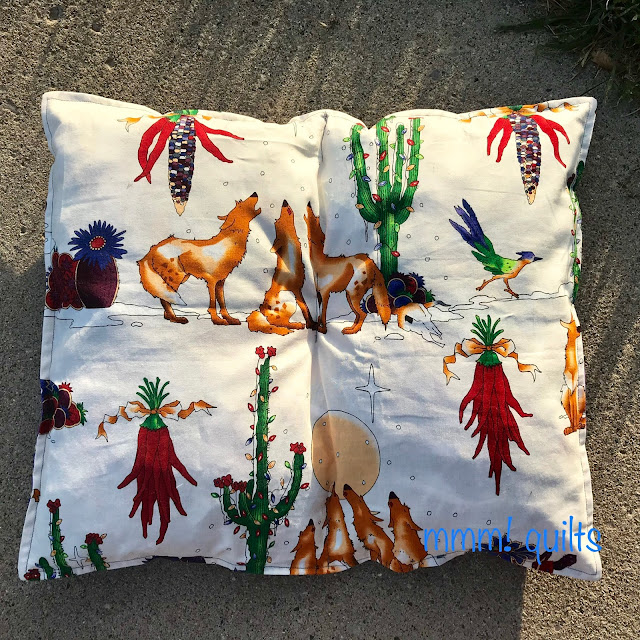 That's what's left, outside of a wee bit, destined for another cat mat, of a fabric bag that held a gift was given to me a few years ago. Great fabric, huh?

Then I made number 2, this with scraps my brother sent me a few years ago from a project he did for a work party. 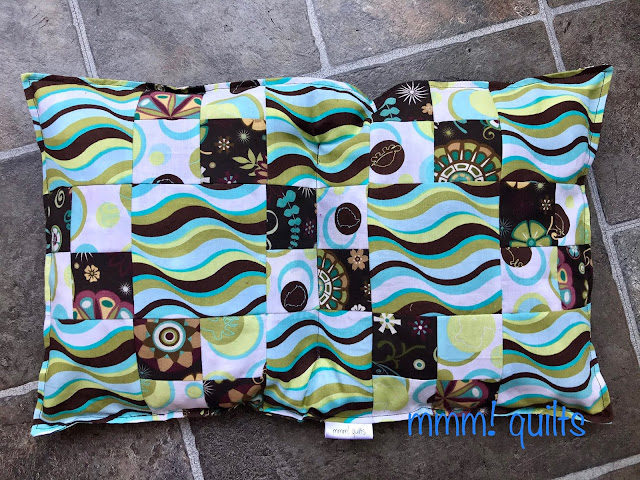 This one was a bit different a size again compared to the first one, and to my last ones. It's 12 x 20".

Piece:
Make 4-patches with two brown and two light fabrics. They will finish at 4.5".

Arrange in the pattern above or however you like.

Sew the top. I like to sew pairs into columns, chain piecing so the column stay in order. I learned this years and years ago in a colourwash class and I use it on nearly all my quilts, big and small.

For this little cushy for the tushy of a cat, I did one column of pairs and one of threes as shown below: 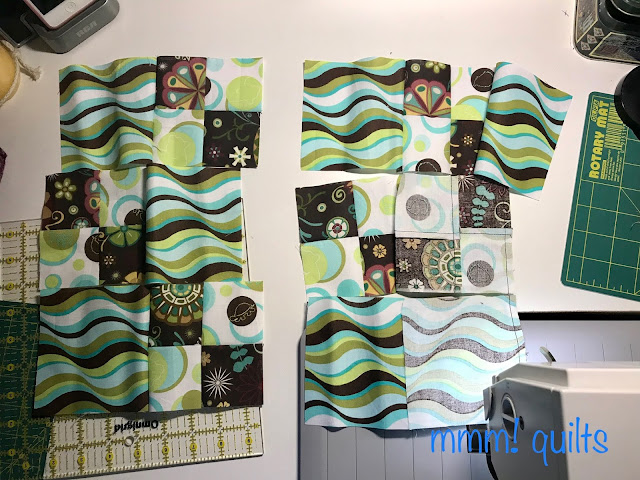 Press the seams to the 4.5" squares (away from the 4-patches) so the seams will nest. Then sew the column pairs or sets of three together. Press one column's joining seams down and the other up, so they will again nest when you join the two halves together. 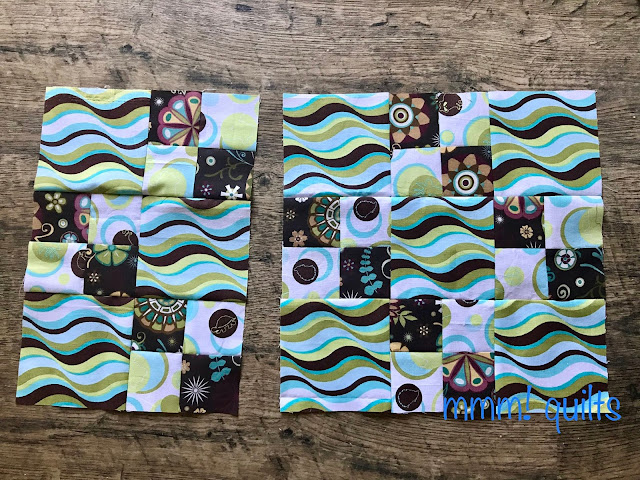 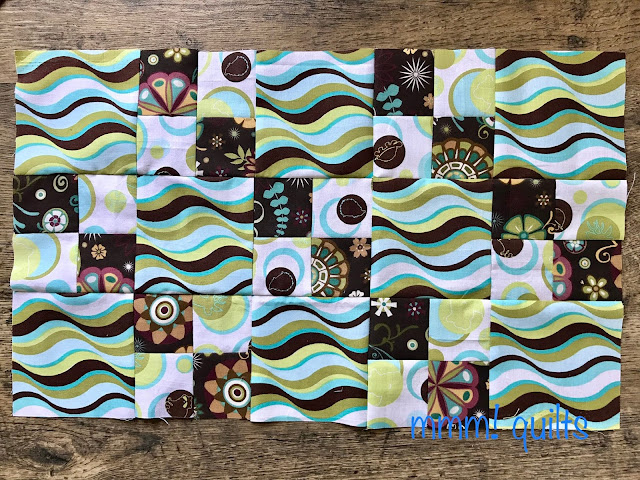 I didn't realize when I made the first cat mats with this fabric, that there are hedgehogs and turtles on the light tone circles fabric! Place the top with the backing right sides together, and stitch all the way around, leaving an opening of about 8" in the bottom for stuffing. Turn right sides out, press, being sure to also press 1/4" under on the opening edges. Then topstitch 1/4" around the edges except where the opening is. Yes, I do that before stuffing as it's much easier to manage with no bulk.

I save all my scraps and threads for stuffing for these cat mats. I love that no waste from my sewing goes into the landfill. 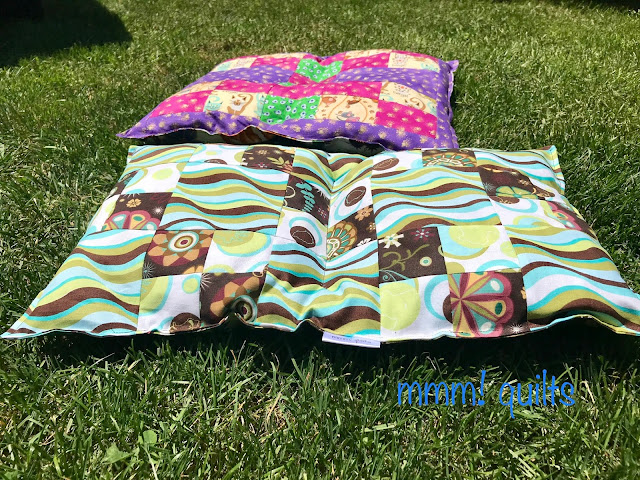 They have a nice loft, nice and cushy for the kitty tushy. For the second one I hit upon the idea of quilting before stuffing which seems impossible. However, I simply stitched a partial line down the centre. I had the idea after I did the first one, carefully and oh-so-slowly stitching a line in the centre after all the stuffing. Stitching beforehand meant I didn't have as wide an opening to stuff, but in future I will leave a larger one. Once you're happy with the poof level, simply fold in along the 1/4" line you pressed, and top-stitch it closed.

Here are the backs of both: 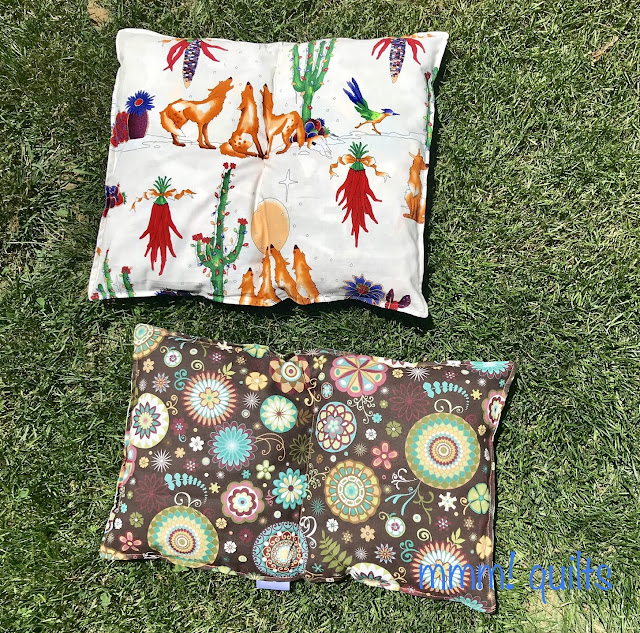 Fun! I get to drop them off at a foster home right here in Kingsville. I hope it helps a couple of sweet feline souls to find their forever homes.

Quilt Stats:
Pattern: original design
Size: 15 X 18" and 12 X 20"
Fabric: scraps
Backing: scraps
Batting: scraps of fabric, thread and batting
Quilted: on my Bernina
Threads: pieced  mainly on my Bernina, a little on Billie, my '47 Featherweight with Mettler 50 wt cotton, the brown one with Mettler polyester

Posted by Sandra Walker at 3:30 AM