Yay for an OMG that is finished in plenty of time before month's end. And yay for a WIP  that is also finally done. I should have had this on my Q4FAL List, but didn't think of it until after I'd posted, and well, that would be 'double-dipping' in the enter-to-win linky parties, so I didn't, not that I've ever won an OMG... I did win once in the FAL, and hm! I still have to go visit Mad About Patchwork and spend my moola. But I digress. Here is my finish: 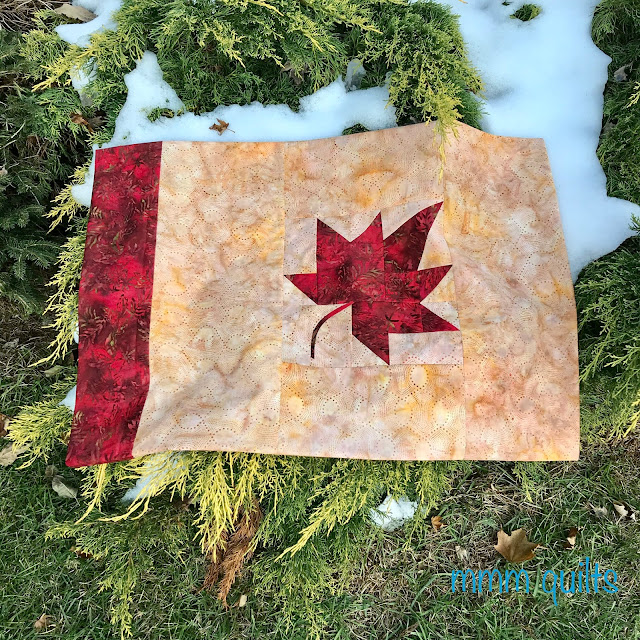 When I spied a bit of snow still left on these junipers, I thought the red would look good against it... and it does! Actually kind of Christmassy, right? Good thing I got that shot when I did, because there's very little snow left only a few hours later, just a bit on the north-facing side of places. I'm good with that because this snow came way too early.
The maple leaf blocks were made two years ago when I made a block for Island Batik when I applied to be an ambassador. I just love this ancient red batik that I've used in a couple of quilt projects, big and small. I have no idea where I got it, nor do I know where I got the gold batik which is lovely fine fabric. The two kind of fell together when I was pulling fabric for the IB block, and I thought ooh, pillow shams would be great for Fall in these colours!

I made the Roll it Up! pillowcase from All People Quilt. I have made it so many many times you'd think I'd know the measurements by heart... It's a slick construction where you make a tube around the body of the pillowcase with the pillowcase band: 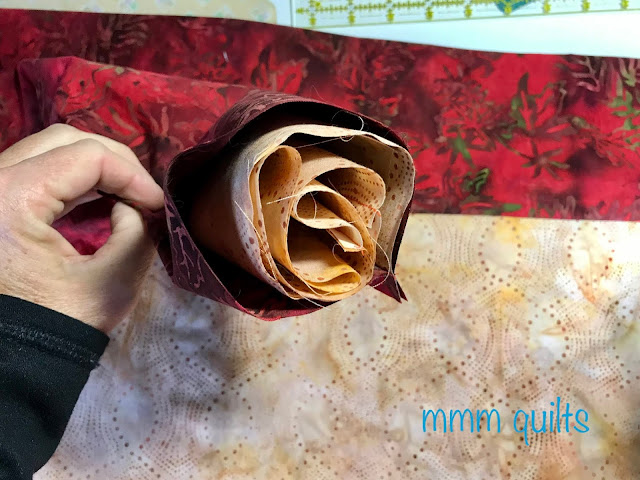 Pull it right sides out and... 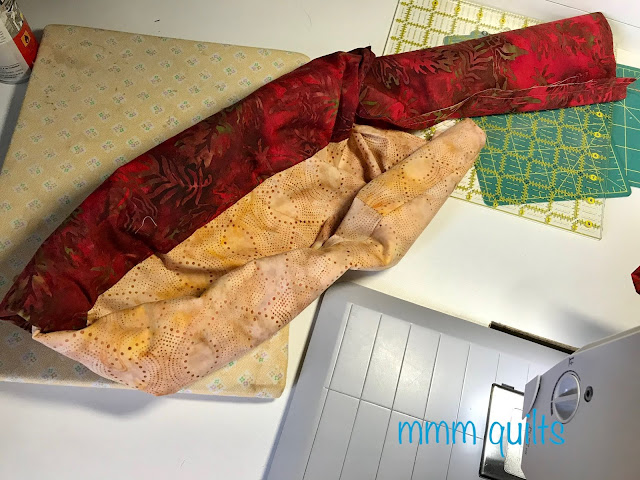 all the seams are encased within the band! You then sew French seams so that there are no exposed edges at all.

I had to do some math to make the 10.5" unfinished maple leaf block into a 26.5 x 41" I believe pillow case body. That's okay, good for the brain to work! I also had to make my brain work to ensure I had the bands on such that the two maple leafs would tip toward each other when on our bed. I used the same construction method to make the leaves as for my Freefall QAL, but I did add a stem. I used Crafted Appliqué method, my favourite.
When I set them up, I realized it's a little Canadian in our room lol! There's a little 6-pound Himalayan Canadian in our room too, taking her afternoon nap.

These won't be on our bed for very much longer, just until the end of the month, because then I switch to my Christmas ones. I now have four sets I've made, autumn, winter, and two summer ones. I love using quilts to decorate seasonally.

A little sidenote: I chased a squirrel, a big seasonal one, this past month and if you follow me on Instagram, you'll see I finished all 20 blocks for my pumpkin patch quilt! This squirrel bit me baaad. I plan to take the blocks which are laid out on the design wall, to the library today where I'm meeting a couple of friends to sew for a couple of hours. I should have a flimsy by the end of the get-together with any luck.

MacGyver took a break from installing drywall upstairs and got busy sanding the kitchen. He is so good at drywalling now that he only sands once after all his painstaking mudding. He has a couple touchups to do and it'll be ready for primer!!! Here it is as of Monday afternoon. 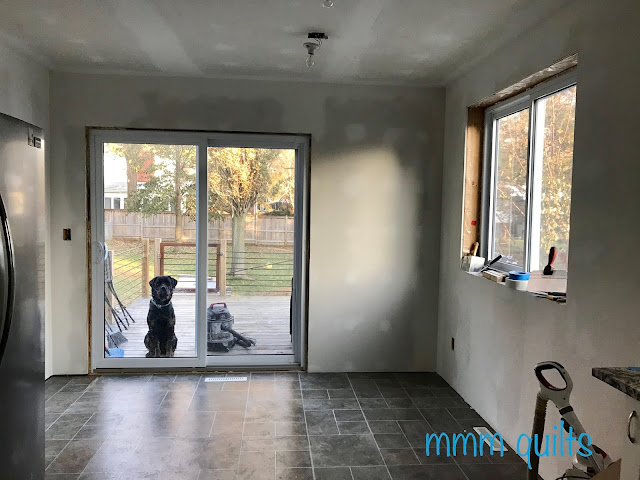 Rufus is finally eating like a Rottie and starting to gain a little weight, though he's still way under what he should be. It doesn't help that he thinks he's part-jackrabbit the way he tears around the yard, burning up the calories. You may notice the one rail at an angle; that's where the patio table hit, so MacGyver has a patch job to do but he's moving the stairs next spring anyhow when he builds the lower level of the deck. Always another project, kind of like his wife with fabric!