This is Nancy's quilt, my first quilt customer. Nancy is yet another yoga student, former teacher, speaks French, sews, and is a newer quilter. She wanted to make a quilt for her new nephew who lives in England. She showed me the fabrics she'd collected, beautiful blues and greens, from several quilt shops. She said that was her favourite part, was gathering the fabrics! She's smitten for sure. 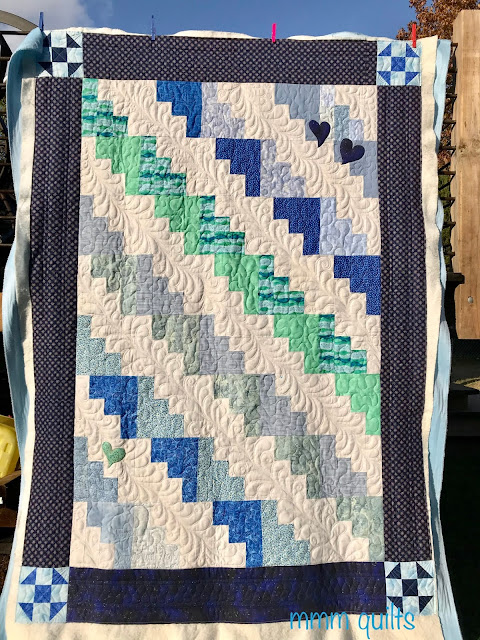 She hadn't settled on a pattern though, just knew she wanted to incorporate as many of the fabrics as she could; more is better... She's definitely a quilter after my own heart! We talked about quilt ideas and petted those pretty fabrics a few times, and eventually  I suggested she may like to make my Blue Skies & Sunny Days pattern, as it's terrific for a controlled scrappy look, and goes together so quickly, great for a beginning quilter. She loved it and said, "That's the one!"

Outside of our library monthly get-together time we sewed at her house one day. I worked on my Bear Paw Dance quilt and helped her get going on the blocks once she had everything cut out. She had the top together within a week.

When it came to backing, I suggested she may like to check out A Stitch in Time in Leamington where there is a wonderful supply of Minky. Well, she loved the idea of that on the back, despite being told by someone that it's too slippery for quilt backs. I offered to quilt it for her if she liked, but no pressure. Well, she liked that idea. 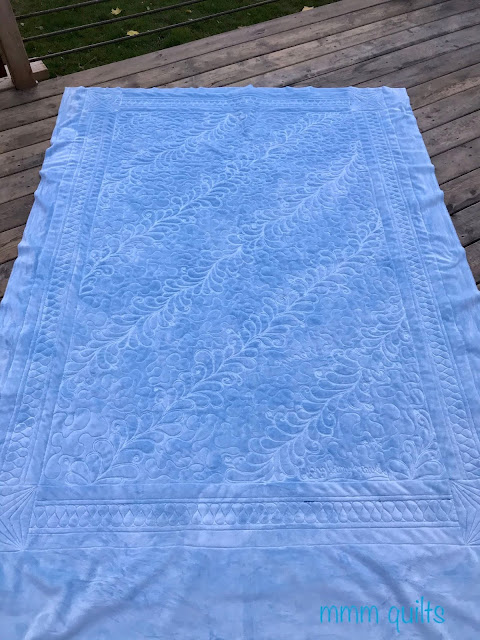 Around that time I myself had been in A Stitch in Time to buy the extra Minky needed for Brady's football quilt. I'd got talking to the owner and found out her regular longarmer was retiring, so she was keeping her ears open to find another... I'd showed her my For the Love of Lilacs quilt that was in McCall's magazine and she was over the moon about my quilting, so she said if I was interested in taking on some of the work she'd love it. She gave me the longarmer's number so I could talk to her about things, which I did. This is how I knew a basic idea of what was charged around here, so I could come up with a figure for Nancy.

Nancy loved the idea of feathers like I'd quilted my pattern cover versions of Blue Skies & Sunny Days. 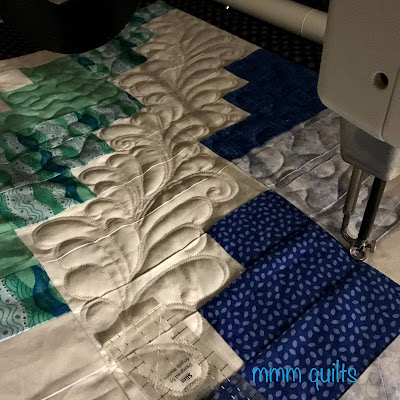 I suggested she grab some Hobbs 80/20 Cotton/Polyester batting at Michael's with a coupon, which she did. I love this batting, and it's great with a Minky backing. So in short order she brought me the quilt top, Minky and batting. I got home and opened up the quilt and found out she'd not only added another row of the stairs blocks, but she'd put on a 6.5" wide border! It was nearly a twin size! She told me later that it's a little boy quilt, so he can use it for even longer. Smart! And? She'd added some heart appliqués, such a nice touch. I love it when people make my patterns their own; I do the same quite often.

Once I had my mum's quilt all done, I started in on hers. I used Superior So Fine on the top, #403, which is a soft beige so it would blend in everywhere. I did a gentle meander in the 'stairs' areas since the quilting doesn't show up that well anyhow.

People asked before when I did my first two if I quilt the feathers in one go, unrolling and rolling back up the quilt. No is the short answer. The short rows I do, but the first few long rows of the feathers I stop as Angela Walters teaches, at a strategic point, so that when you unroll the quilt to do the next section, you can easily blend in the feathers. This is also the technique for doing feathers in the long vertical borders. Some people take a quilt off and turn it sideways when doing feathers in a border, not I. It, and several other worth their weight in gold tips and techniques I learned in that former-Craftsy class, now on bluprint: Free Motion Quilting With Feathers. (affiliate link)

I'd suggested perhaps a piano keys border like I did on the Lilacs quilt, but I told her I'd think on it while I quilted the centre. It wasn't long into the quilting that I had the idea of doing the ribbon candy. I sent her a photo of some I'd done around the blocks in my Midnight Mystery quilt. She liked it. I switched to Isacord in royal blue 40 weight so it would mostly blend but still be visible. I'm so glad Avril loves all threads. The Bottom Line went in the bobbin.

I also suggested I quilt in her name as well as the baby's, and she loved that idea. 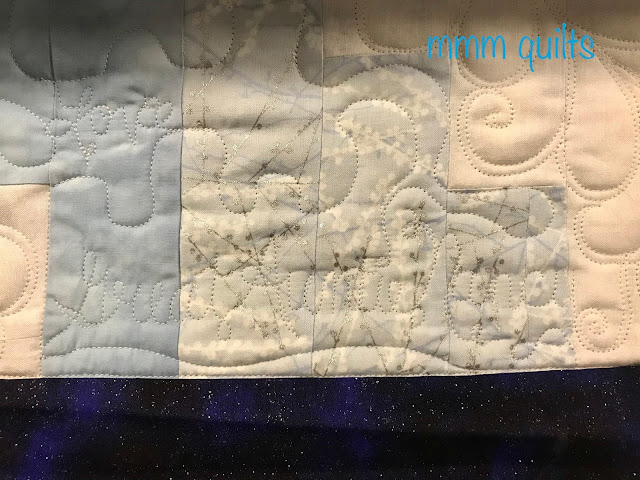 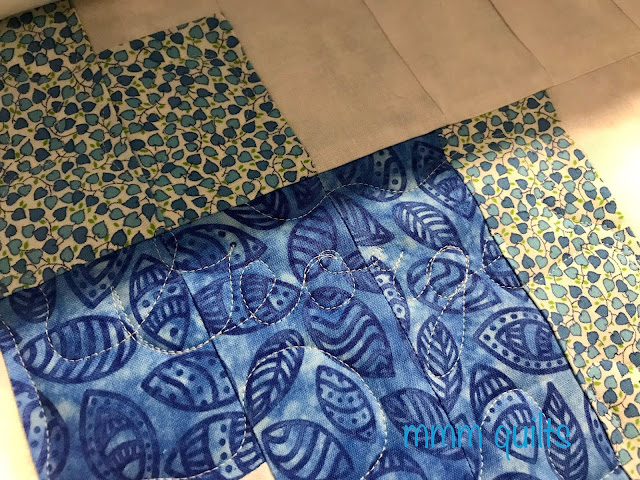 In the churn dash cornerstones, I did a Dot to Dot design, another terrific worthwhile class on bluprint, Dot to Dot Quilting, and I even took it from Angela in person a few years ago, worth every penny! 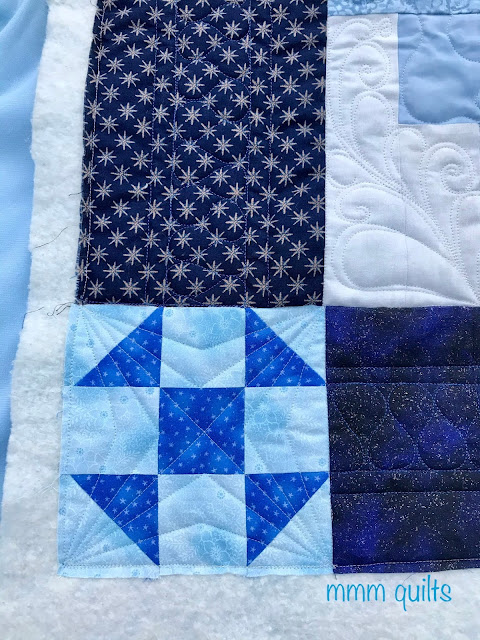 It, like all the quilting, shows up so well on a Minky backing. 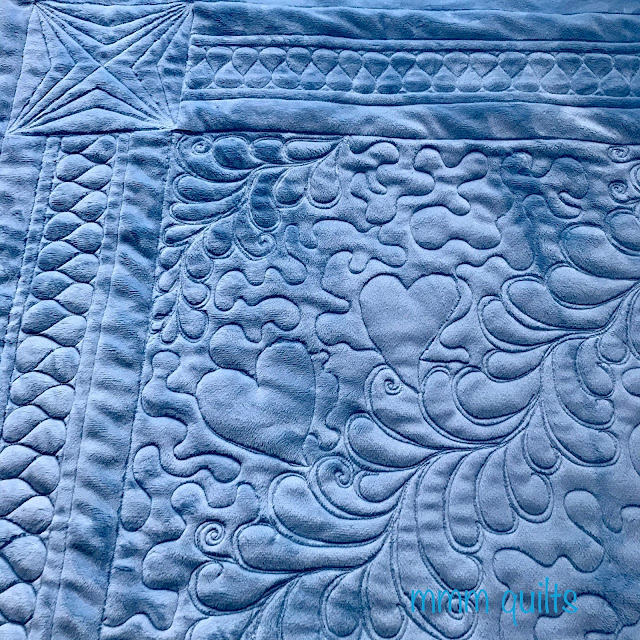 I simply outlined the hearts she'd appliquéd as I knew they'd show up nicely on the back. Minky may be a touch more finicky as in it's a little bit stretchy to pin onto the longarm, so you have to take extra care, and it's thicker, so I bind with a 2.5" instead of a 2.25" binding. I always use a batting with it, though some don't, and I always lay the Minky so the nap or pile is going down, as in you'd pet it downwards towards the bottom of the quilt. If you're joining Minky, you need to be sure to have that nap all going the same direction.
Sidenote: Brady told his mum that his football quilt (with Minky on the back) is the best blanket he's ever had. He's had several quilts from me and lots of blankets for his bed over his 11 years, so that's quite the compliment!

I was pretty nervous quilting this, but Avril was a dream, and 10 hours of quilting time later, the quilt was done. This is the first time I've kept a close track on my quilting hours. I call this a semi-custom quilt job. 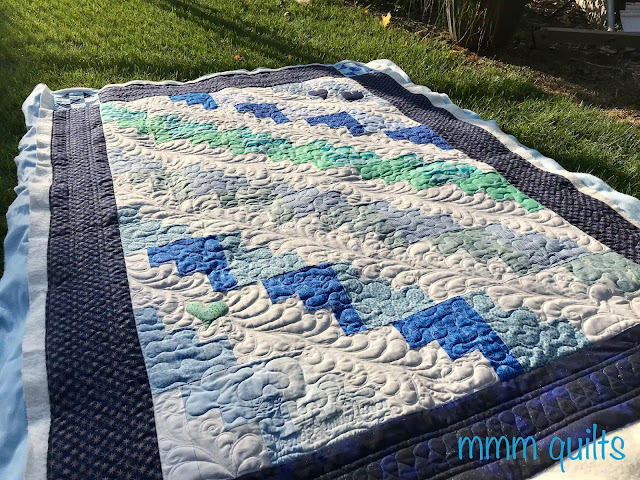 Although I do not want to be quilting as a business, doing someone's quilt here and there as they fit in with my own things was fun and another challenge/new experience! I've offered to help her bind it too, since she's only bound one quilt before, so we most likely will get together once more to finish this up.😊

A note on threads: Connecting Threads, who I have supported before, as well as during, my affiliation with them, which is back. I mentioned my longarm, Avril, loves all threads, and their Essential line is one I've used a lot. They actually have them on sale right now, and even their regular price is great, $2.79US for a 1000 metre spool. It's 50 weight 100% cotton. Their sets are on right now for 30% off. Click below or that 30% off link which is an affiliate one, to check them out. I love this rainbow set, 10 colours for just $24.43, but ha, I have almost every one of those colours anyhow! I love their free shipping policies for more than just the US!!
Thank you for the support here; it help pay for the linky parties I run, as you have to pay monthly for that. Tomorrow is Throwback Thursday by the way, and I'm hosting! 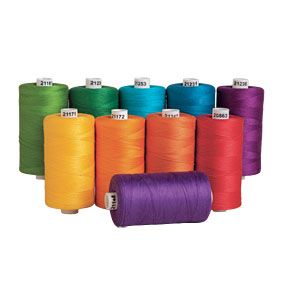 Posted by Sandra Walker at 8:01 AM