I am pleased to have yet another item finished, a large one, and checked off the Q4FAL List, which is here. I've had it done for a couple of days, but the sun did not cooperate for photos until today. This quilt is for my daughter, Brianne, the one who doesn't like quilts, same daughter who got me started in quilting when she, at the age of 8, basically forced me to make a quilt block to enter in a draw for all the blocks turned in, and yeah, I won. So I had to learn how to make a quilt. That first quilt went to her. Since then I've made her one other, again in pinks with oranges, and now a third, again pinks. Yes, she's a pink-loving girl, always has been. 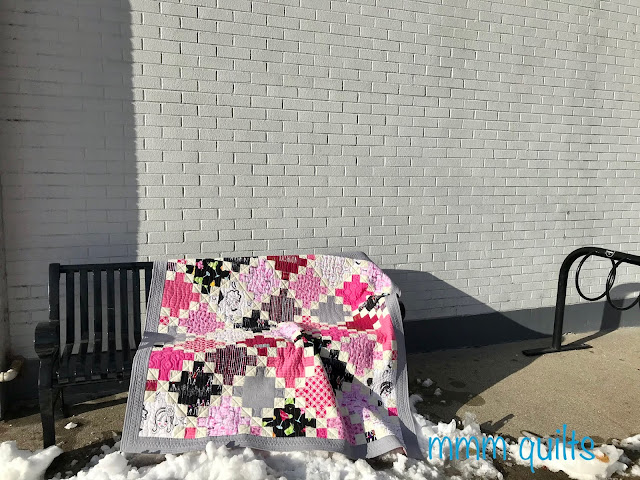 I collected the fabrics over the course of about a year. That was oh, three years ago... thinking it would be for her then new home. Now she's in her new house (for over a year, oops) so this is like a happy new forever home quilt.
Yeah we got snow...set a record for amount, earliest, and coldest overnight temperature that fateful day. And it's been cold all week.

Last weekend when I was driving home from yoga in the Walkerville area of Windsor, I spied this white brick wall of the building where the vegan restaurant, an excellent one, Carrots 'n Dates, is, and with that black bench outside of it, I knew right there and then this is where I'd take a photo of Brianne's finished quilt. 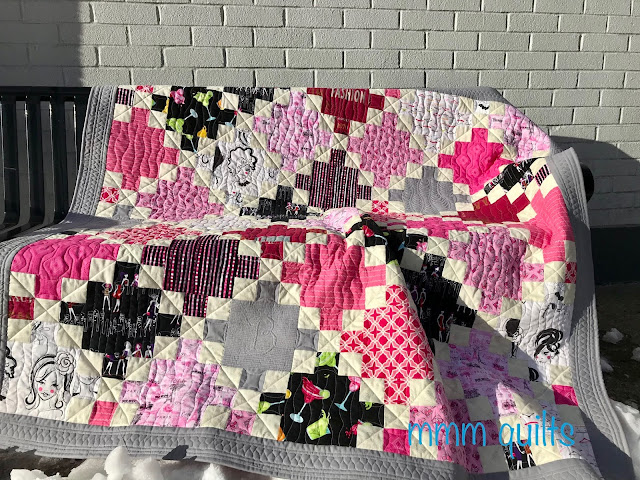 The quilt is another one out of The Simple Simon Guide to Patchwork Quilting by Liz Evans and Elizabeth Evans. I made another one, which I called Twinkle Sprinkles, out of this book. That quilt I ended up sending to my cousin in England as a quilty hug after the tragic death of her husband in September. I had no idea, but the turquoises, pinks and mauves in that quilt are her favourite colours, so it was fitting. Anyhow, I've had this book out a few times now from our library. It's a great book, and there is at least one more I'd like to make from it!

It's a slick construction method that is a surprise, as when the quilt is quilted, your eye is fooled. The in-progress shot below spills the beans. 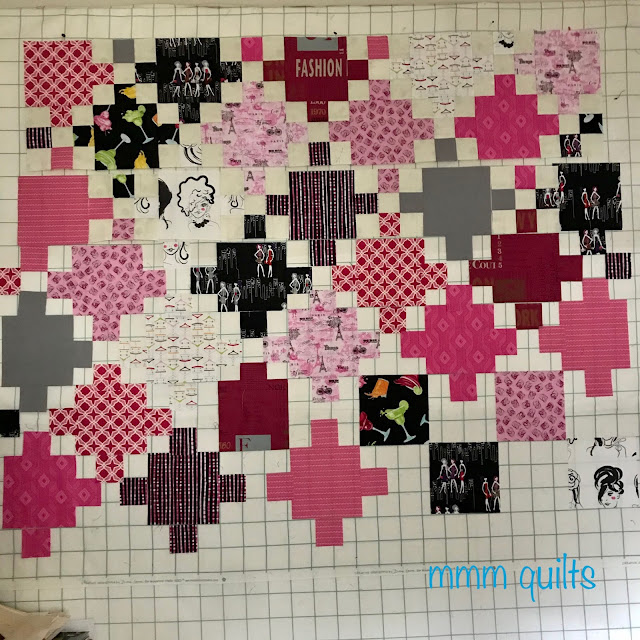 Cool, right? Simple 9-patches and patches, all squares, thank you, the end. 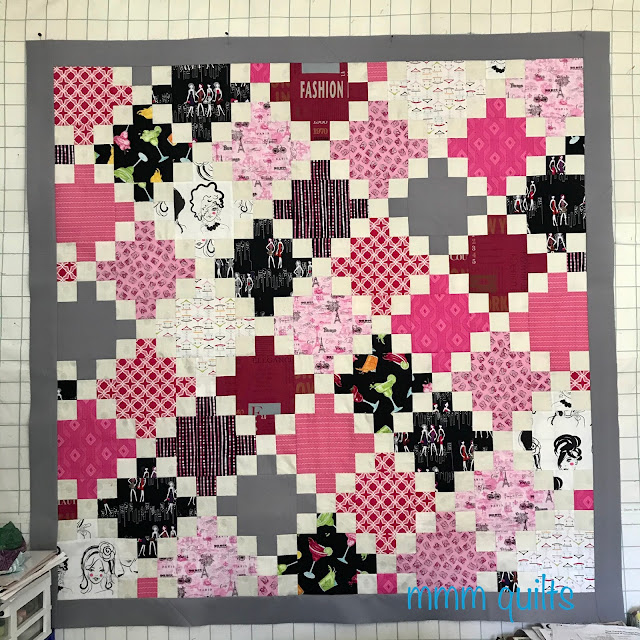 Getting it to this stage was not cool. There are errors in the pattern. This is now the third major error I've found since July in two books, as well as in McCall's Quilting magazine, where there are errors, in my own pattern, that are not mine, (another post, coming soon). The other was the quilt I made for the August hop, Ripples, from the book The Quilter's Negative Space Handbook by Sylvia Schaefer. I emailed her to tell her of a rather grave error, that, thank god, I had enough fabric to correct. I see from a quick check of her blog that she hasn't made an errata page for her book, so if you bought it and plan to make this quilt, email me for the correct cutting instructions. I can't find Liz or Elizabeth on Instagram or through Amazon, so I can't advise them of their rather grave error in measurements of the final borders, so again, email me if you have this book and plan to make this quilt! I fixed it in the library book and confessed to the librarian that I wrote in their book, lol. No worries; she's also a quilter, and was happy to know it has been fixed.

I set it on another bench outside the adjacent building which is appropriate as it's the Walkerville Brewery! (our last name is Walker) 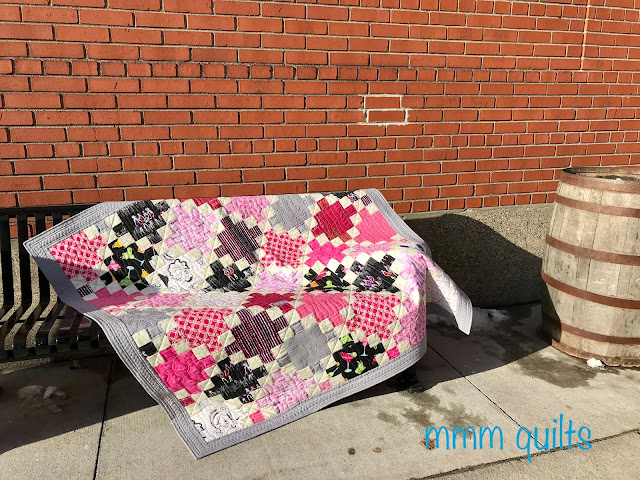 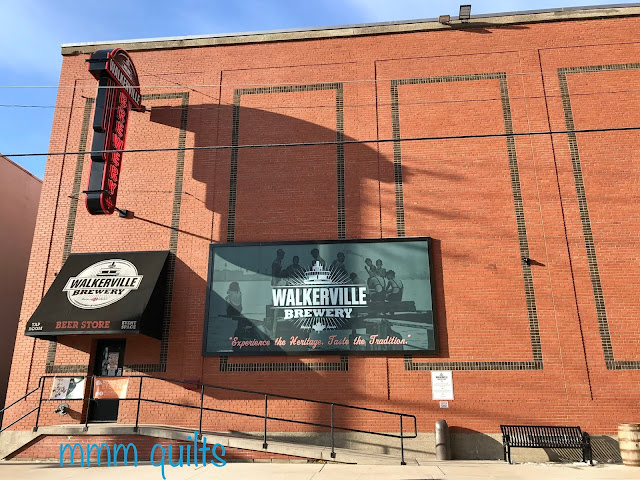 There's an Etsy Christmas show going on here this weekend. First one. Maybe I'll be in it next year...

I loved how their quilt is quilted, so I followed the plan. Mostly. 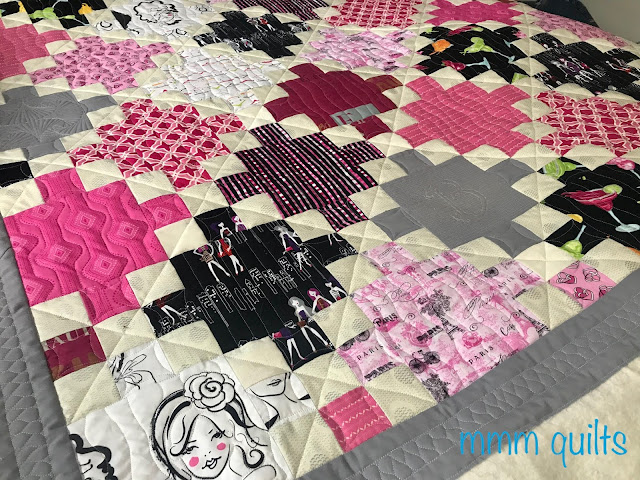 People ask when I do diagonal lines on a longarm, if I do them in one pass, rolling and unrolling the quilt on the rollers. Nope, unless they're shorter lines where I don't have to roll too much. I find a spot where I can stop that is easy to blend back into. I will roll and unroll a little bit to get to that optimal spot.

Their quilt had all the centre large patches quilted with echoed wavy lines. I did random ones in most of the patches, (isn't that the best fabric? So Brianne.) 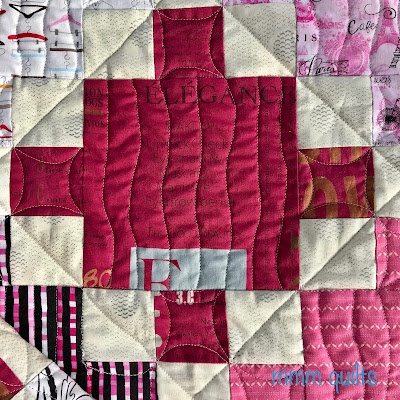 and straight lines in the city girls black fabric, which is 'It Girls' by Greta Lynn for Kanvas Studio by Benartex. 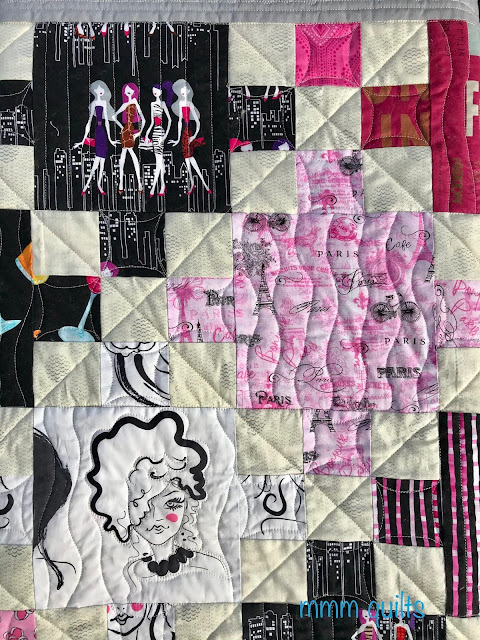 I followed the girls' hair and faces, in the 'Belles Parisiennes' Art Gallery Fabrics patches, and the outer dots in Kate Spain's pink Paradiso fabric by Moda. I hadn't intended for there to be so many French-themed fabrics, but it is à propos since both girls were in French immersion for all 13 (counting kindergarten) years of their education, Brady is also in French immersion, and I taught French as well as English in every one of my 30 years of teaching! You may have read that I was in love with all things France from being a preschool child; and in all seriousness I know I lived in France in one or more of my previous lives. For the stripe fabric, another by Greta Lynn, not bought at the same time as 'It Girls', I did straight lines following every couple of stripes.

Continuous curves, just freehanded, went in the 9-patch coloured squares, and diagonal lines across the white ones.

There are three solid grey patches, so even though Brianne didn't want a quilty quilt, I had to go to town a little on them...

In the photo below you can see the third design, Twisted Square from The Quilt Journal on YouTube. For the grey border, they quilted a large overlapping ribbon candy, but I elected to do a similar one to what I did in Nancy's quilt. I switched from the So Fine to Aurifil for the grey areas so it would blend in better. It amazes me the lint that comes off cotton threads after using polyester for the bulk of the quilt. 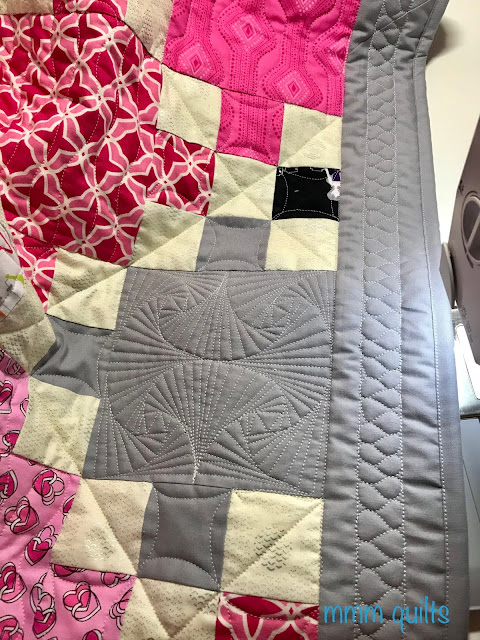 I bound it by machine, top-stitching it onto the front of the quilt. This is when I thought nope, I need to echo that straight line on either side of the ribbon candy.

Ahh, much better!
I'll update this post with the label and the backing photos once she receives the quilt in person. Since she reads my blog, I am saving that little surprise for when she has the quilt in her hands. Yay, the sun finally peeked out here in Kingsville; so weird that in Windsor, just 40 minutes away it was sunny hours ago, but not so here, maybe due to fog off the lake, who knows.

Quilt Stats:
Pattern: Nine Patch by Liz Evans and Elizabeth Evans
Size: 59.5 X 59.5"; after quilting 58.25 X 59"
Fabric: various
Backing:
Batting: 100% cotton (do not know the brand as I bought it off someone)
Quilted: on Avril; 87 815 stitches
Threads: pieced on my Bernina with Mettler and Gütermann cotton; quilted with So Fine #402, and Aurifil 2600, The Bottom Line in the bobbin

Posted by Sandra Walker at 5:08 PM