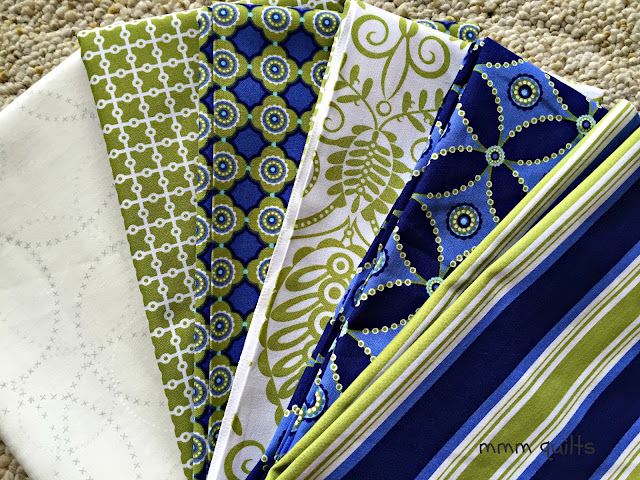 I went to Expert Sewing in Port Charlotte on Saturday, as I found out by a fluke that they had been running a sale for a good chunk of the week to make room for new stock, and it was ending on Saturday.  A girl's gotta help them out, right?  I scored these lovelies, in my favourite combo of blue and green, in the clearance section, where they were $1 extra off per yard, so $4.99!  The white with grey x's is by Zen Chic, Modern Background Essentials.  Regular priced fabric was 30% off.  I could see bags. 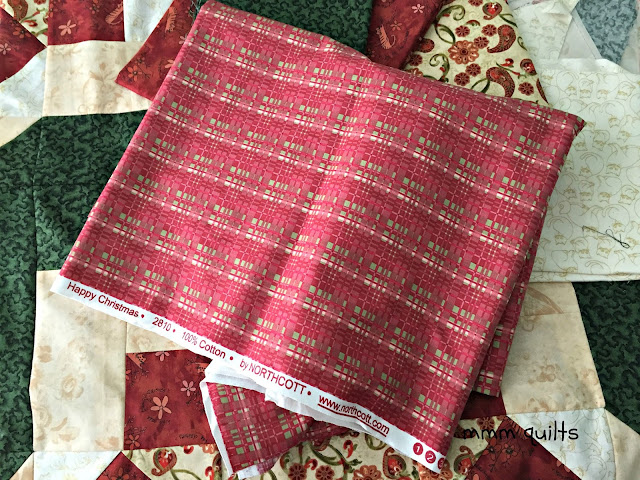 Three yards of this Northcott came home with me too, from the clearance section.  I thought it might work as the backing of my mystery quilt, which I hadn't meant to be Christmassy.  I like it.

Then my sweet friend Tish and I have been having lovely (that's the word for this post apparently) iMessage convos about all things quilty, and some things not, and anyhow, one thing that came up was that she has wanted for some time to do a Swoon as well.  I'd mentioned it in my Sunday Stash post that my first fabric club shipment would work nicely for a big one.  Thus, an idea was born, where each of us is doing a Swoon quilt (we're starting with the mini) in February.  And, we've decided that we are joining in with Red Letter Quilts' OMG: One Monthly Goal (I just love intelligent acronyms like that!) to get this done.  Somehow our private little quilt along grew two more friends, Cindy of Stitchin' At Home and Julie of Pink Doxies. Fun! Fun!

The pattern is available at thimble blossoms. The four of us would not say no if you are wanting to pick up the pattern and join in.

This is how Dayna's quilt and Brady's movie do NOT get done...

And how fabric bought with no particular pattern in mind has now become some for my mini Swoon!
Sidenote: I was listening to a podcast on the weekend on Crafty Planner, episode 34, where Tula Pink said she finds there are two camps of quilt fabric buyers: those who buy fabric for a specific pattern and those who buy fabric and then later figure out what they want to do with it. I'm in the latter camp for the most part.

So the blue and green Michael Miller fabric I bought has now decided it is going in the Mini Swoon.  I think the stripe will be binding, not sure.  I need 8 fat eighths, so taking out the stripe means I have four here.  This morning I spent some lovely time pulling some other fabrics, fabrics that will "go" but contrast at the same time.  I liked the little hits of light blue in the navy/green fabrics, so I started there.  Thought pink as a contrast to the cooler colours here, but it felt too soft.  In my Tula Pink's City Sampler stack of fabrics, I had some leftover red from Parisville Weave, and I liked it! Here is the final combo:
Something new, something old, something borrowed (the reds from Parisville Weave as well as The City Sampler), something blue!

This will be so much fun.

Speaking of fun, you may want to stay tuned to this blog, as well as to Julie's Pink Doxies, as we have come up with something pretty sweet and fun for next week leading up to Valentine's Day!  Did I mention there will be prizes?  Love stirring up the waters, creating intrigue...

Unfortunately, I couldn't get my phone out fast enough to capture that hilarious moment.  He was like, "I'm done you guys; I need to cool off before we head back; the water's lovely!"  Then Brandy and Naala decided to join him but they didn't lie down.   Our private little joke when people ask, "Just what kind of dog is that?" about either Rocco or Brandy, both pibbles, aka pitties, aka Pitbulls, is, "Oh that's an Oklahoma Water Dog," which doesn't exist but helps in avoiding the prejudice these sweet dogs face all the time.  Well, Rocco, unlike Brandy, who dislikes water, definitely IS the second half of that made-up dog breed!

Linking up with Red Letter Quilts for OMG for February!

Posted by Sandra Walker at 1:54 PM