I decided to join in with the Modern Quilters Ireland Rainbow Rose QAL.  I love the Swoon block, made a mini earlier this year, and have plans to make a giant one this summer.  I didn't think I'd be making a baby-sized one as well!  I also wanted to give Ruth my support; I follow her blog, Charly & Ben's Crafty Corner, and thoroughly enjoy seeing what she gets up to, and how she uses colour.  She also has a great tutorial on using shapes within Microsoft Word which I used when I did my first pattern Pocketful of Sunshine.

Just as with Angela's RSC 2016 (Rainbow Scrap Challenge), I had to do some catch-up.  Here is my sorta/coulda/maybe/I dunno for sure, Week 1 fabric pull:
Although I didn't put mine in a circle, as most did, I did pull from the pinks at the bottom and tuck them in behind the purples to see that I'd got a decent transition.  There are more options littered around the edges as you see; for example, I don't have a teal (the Zen Chic 'Sphere' fabric on the right side) and I found a good pinky red below another good turquoise (or is it aqua?) fabric...  So I haven't cut all my squares.  I have to say that I just LOVE projects where I get to muck around in my stash; it's  therapeutic to be sure (make sure you say 'to be sure' with an Irish accent ;-).

Update a couple hours after posting:  To say something, or not...I at first opted to say nothing hoping the title and my silence would speak volumes.  However, something my brother said to me this morning after he saw this post made me think maybe I should say something.....  I sewed on Sunday, with a heavy heart, profound despair to be exact, thinking how poignant my rainbow stitching was...thinking about my family members, my friends, my colleagues, my darling hairdresser who is the first hairdresser in 50 years who knows how to cut my naturally curly hair, thinking about the sadness and horrors and judgement and maltreatment they have witnessed and possibly been subjected to over the course of their lives.  Just before adding this paragraph, I looked at the time stamp on the photo of my fabric pull above.  June 11, 8:59 EST.  That is what made me write this update.  I was happily pulling rainbow fabrics, and a few hours later many LGBT human beings had been murdered for being themselves, in a safe place where they thought they could be themselves.  I am not jumping on a bandwagon of 'standing with LGBT people, no.  I was already there.  Have been for decades.  MacGyver and I talked before I wrote this.  He said when you write publicly, you're damned if you say something, you're damned if you don't.  Well I'll be damned for saying something then: until we practice ahimsa, (do no harm), until we practice what Mohammed the Prophet, Jesus, the Buddha,  all said, Love one another, without exception, we cannot get past intolerance, racism, prejudice.

Here is Week 2 step, making the four 'points of the compass' if you will, on the Colour Wheel:

You can see (I hope) the blue-purples on the left of the square, the red-purples on the right, which will head into pinks.  Then the red, and to the right of the red (which has a bit of a pinky one on the top triangle) the orange-reds, heading towards the oranges corner and into the orangey yellow...and so on.  I found it so interesting and gratifying that Ruth said colour has a personal side: she sees blue-greens more as greens.  I see them more as blues.

Everyone seems to enjoy the spinning effect of putting our four blocks together, and I did this before seeing the others! I find that interesting too: we innately want to create movement. 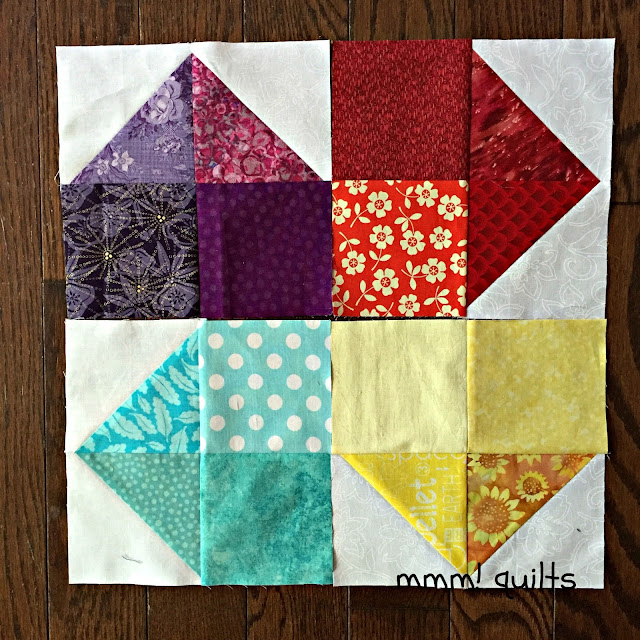 That would make a terrific cushion right there, wouldn't it?!

My other catch-up item was doing the January row of blues (think frosty blues to deep midnight blue skies with sparkling moonlight-kissed snow) with a touch of purple.  As with the other rows I've done in this second RSC project, I use the "touch of" colour that Angela gives as the inner frame around the rectangle. 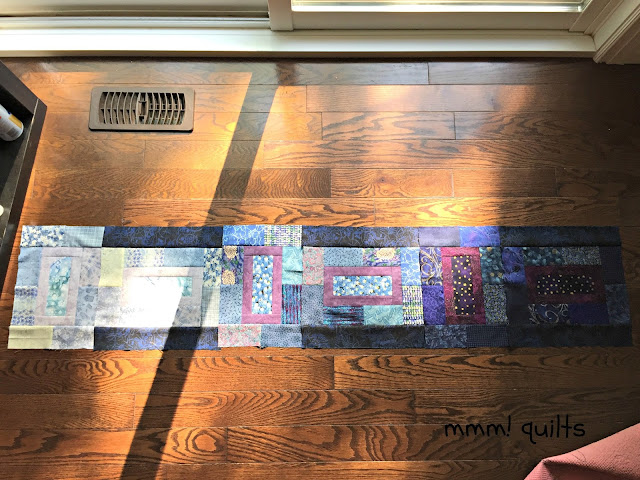 Yet again, I am mesmerized by the study in value here.  It isn't the greatest lighting, having sunlight on 5 of the 6 blocks, but you see how the purple goes from palest mauve to rich royal, and the blues from palest Bella's blue, perhaps even paler, to rich royal deep midnight blues. Linking up with MQ Ireland.
Posted by Sandra Walker at 9:23 AM