Mini Round Robin - Round 3 and Final Reveal

Along with the summer speeding on by, our Mini Round Robin has come to an end and I can hardly believe it!  Of course there will be the final reveal of the quilted mini at the beginning of October.  The original centre, called The Attraction Block, is Tish's.  Julie added the first round.  Here is what I received from Cindy. 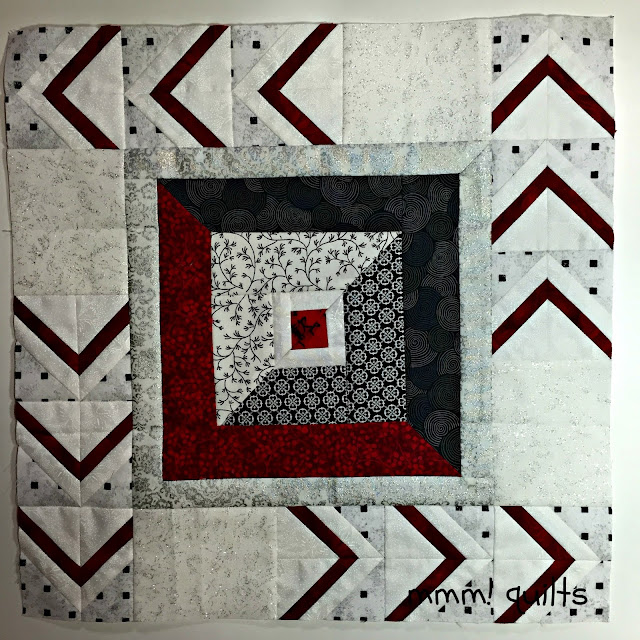 I knew two things, well three if you count the fact that I LOVED what Cindy did on her round!!  Okay, first I knew I had to do angles, not angels, angles, although I needed some angel guidance as August neared its end...45-degree angles are in each round as well as in the centre.  Second, I knew it needed pretty much all black and red as it was reading pretty white.

Tish had talked about her colour choices of red, black and white as classic, so I knew the final round should be in that theme.  I thought of a fancy appliqué, and I kept thinking 'classy' and classy ladies, and black tie affair, and tuxedo, and tuxedo cats (one of which chose Tish as his human), black cats, which Tish told me often find their way to her, and I, too, have a soft spot for black cats...
So a frame was added.  I had just the fabric, bought a piece when it first arrived in my LQS, Moda's Black Tie Affair by Basic Grey.  Thus ensued the math devils...my angels deserted me... 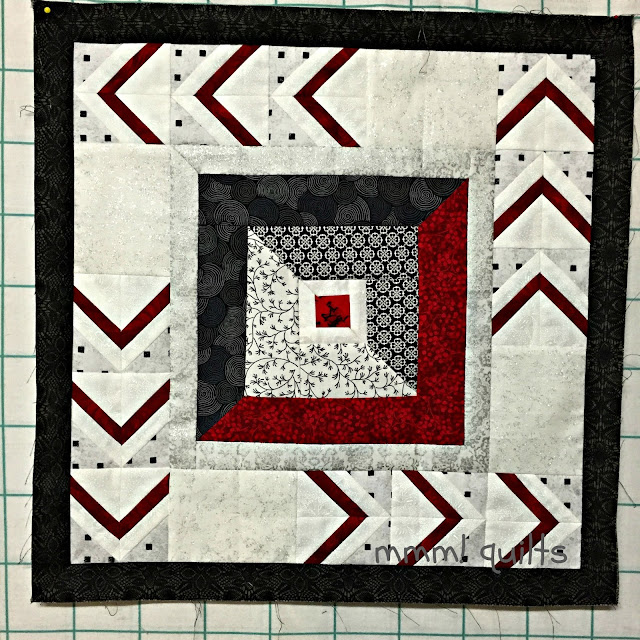 I remembered a mini log cabin pattern I had that had 3 1/2" (I thought) log cabin blocks. Log cabin is a classic block, my second favourite block after stars.  I'd made several of the runners over the years.  Did I still have that pattern?  A little digging, and yep.  Sadly, the blocks finished at 3 1/2", so they wouldn't divide into 18".  Still, I loved the idea and knew I could do something with it.  What about offset log cabins? They can produce some wonderful curves.  (You're thinking, 'Wait, Sandra, thought you were doing angles?' and...bada-bing! Welcome to my muddled menopausal melon.)

I pulled out three fabrics from the stash and scraps to make a few test blocks to see what size they'd end up.  Math had already gotten the best of me, so best to make some rather than trust my calculations...
The offset log cabin blocks didn't really curve the way I wanted anyhow with only two rounds and with only half a set of four, so I thought I'd go back to the log cabin runner pattern.

White centre squares.  I did 1/3 of them in an embossed white that looks like the exact same fabric in Tish's centre, that 'box' around her red centre.  But I noticed she also used black on white, and so did Cindy, so I looked through my thin stash of that, and came up with two, one with flowers on it (I remembered Tish sending me a photo of her newly planted flowerbed in early May) and another with sketched cat faces on it:

Red and black for the logs.  The blacks in this block weren't solid, so I found one I'd bought last winter at a quilt show with a large line-drawn floral pattern, and then... in my MacGyver's flaming skulls quilt (yet to be made) stash I found a black with white pawprints on it fabric.  Tish and I both love animals; especially our pibbles, but we have all dogs' and cats' pawprints on our hearts, so I knew I had to do one round using this fabric.

Right.  The math was still worrying me, but I figured I'd start adding rounds as it was uh, August 28; time was a-ticking.

As you sew, you think.  It's very meditative.  Somewhere along round two, I thought of doing two sides with the red logs in and two with the black logs in.  Placing the red logs borders where Julie's black frame was, and the black logs where her red half-frame was.  Keeping the 'attraction' theme. 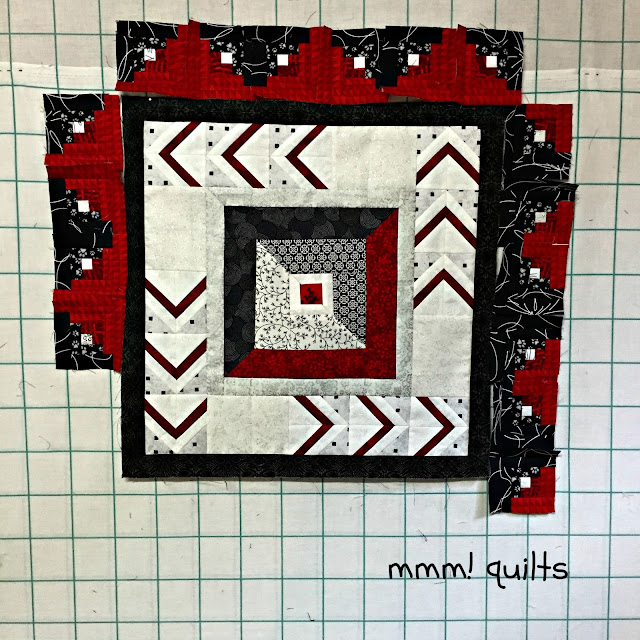 Yep I think that will work...Bella was helping as per usual...now this pesky math... 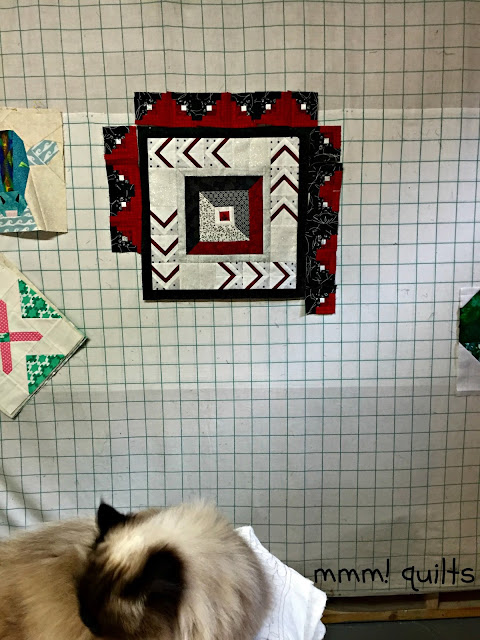 Tish's centre is two right triangles sewn together on the 45.  Julie picked up on that by mitering the black/red seams in her round.  So I followed that theme, placing a solid black square in one corner where the two mainly black log cabin borders meet, and a solid red in the opposite.  For the corners where the black meets the red I did an HST. 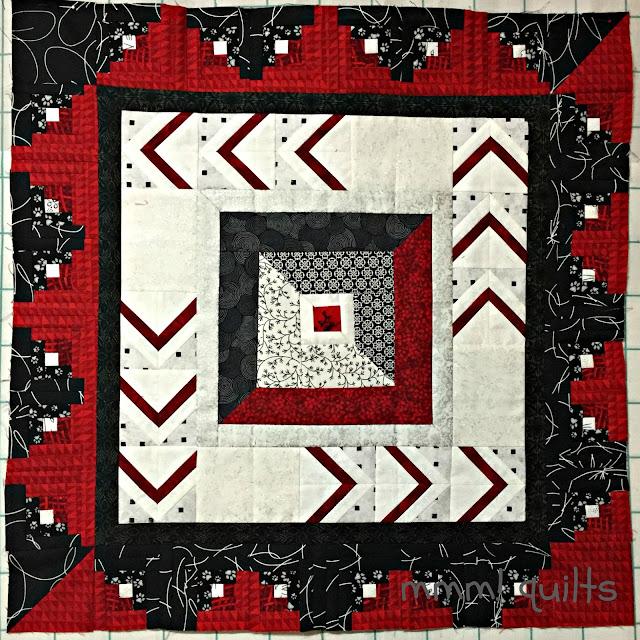 After all the ripping and hair-pulling it took with the math issues I am pretty pleased.  I also noticed that my tiny white square centres echo Tish's red centre, and Cindy's black squares on white fabric!  That wasn't planned but I'll take it!

You can see the other finished flimsies below:
Cindy at Stitchin' at Home (she did the final round on my centre and I just LOVE it!!)
Tish at Tish's Adventures in Wonderland
Julie at Pink Doxies

Linking up with
My Quilt Infatuation
Crazy Mom Quilts (Yay! Amanda Jean's back!)
Confessions of a Fabric Addict

Jeez Louise I only posted 6 times in August.  I reached (bashful face) rather a milestone in my bloggy life a week or so ago, over 250 followers now on bloglovin'.  WHOA Nelly.  (see? Louise and Nelly both got in this post) Should make a quilt and call it that...there will be some celebrating in my future. Which is looking rather busy for the month of September...but I hope to post more than six times sheesh!

Update: My bad, but I went to link to the Friday parties this morning, and I see I have an email from Brittany at Craftsy (I am an affiliate):  I guess all their classes are $199.99 ...oops! LOL had to leave that for a giggle.  Make that $19.99 (under $20 just so we're clear) from right now through Monday, Sept 5 11:59 pm MDT (that's because their classes can be bought and downloaded worldwide.  I will be reviewing one coming up that isn't even live yet, so watch for that. Previous reviews can be found here, and you KNOW how much I rave about any and all of Angela Walters' classes, worth every cent.  Did you HEAR?????? She has another book coming out with Tula Pink!!!  17 quilts that Tula designed and you guessed it, Angela shows how she quilted them. Cue the choir of angels already! I haven't even finished reading through her Shape By Shape 2 Collection 2 yet!! (no affiliation)

Okay I got sidetracked by Angela news (that girl can sidetrack me anytime, I do not mind)  Anyhow might be a plan to check out a class you have had on your wishlist for a while; that's what I do; I never pay full price (shh)... Speaking of 'under the radar' stuff, did you know that there are still amazing deals to be had on fabric at Craftsy? You do not have to wait for their sales.  I came across some screaming good deals on 4-yard cuts (think backing fabric right?) for $8CA a yard, like $6US.

Here is a Bonnie and Camille Hello Darling one, and here is a Kate Spain Canyon one. There are LOTS more.  I've bought these before, 1 yard cuts and a 5-yard cut of RJR Handspray in black.  Just like for clothes, you can never have too much black.  I see several of the Handspray precuts are on 35-40% off too.  Might be a time to investigate a little stash enhancement. ;-)
Posted by Sandra Walker at 8:27 PM