It is the last Thursday of the month, which means I write my gratitude post. I'm starting to get back into a routine, if only teaching yoga classes as usual this week, and trying to get back to the blog schedule. I realized yesterday I missed May DrEAMi! so I think I'll have that on Saturday June 2. If your regularly-planned quilting schedule got derailed by a just-have-to-make project this past month, then I hope you'll link it up. Squirrels are like rabbits right: multiplying in a blink!

Here are my notes of gratitude for the month of May. Interesting, in that Yvonne, the chaplain who directed Mum's Celebration of Life said in her talk, "Gratitude shifts everything. Even in the darkest of times, there's always something to be thankful for, if we are willing to look for it."

1. I love Spring. This is a photo taken on the public pathway between two houses in here (not ours) of the wonderful violets that carpet the grasses in early May, with a Forsythia (always associated with our five years here in the late 80s, as we had a beauty in our front yard then) and a towering Magnolia in the background. Such colours, perfect for a quilt right? 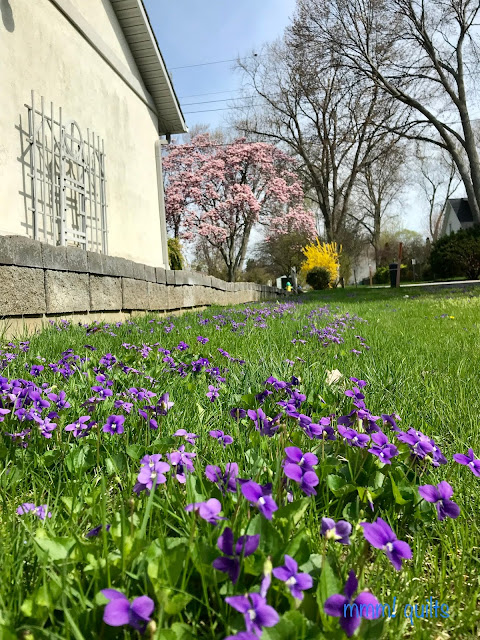 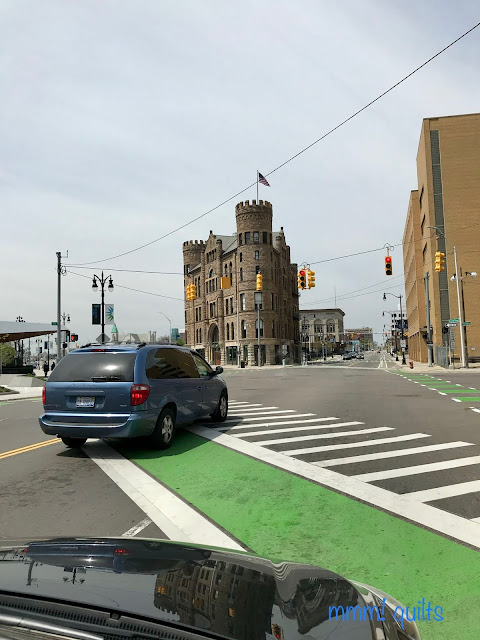 3. I just love time with my grandson, Brady. We had him all to ourselves for the May 11-13 weekend.

And then, even though the circumstances were not at all good in which I got to spend some unforeseen extra time with him, it did give some much-needed respite to a time of such heartbreak, sorrow and angst.


4.  I like this sign I spied on someone's lawn. Dayna and I were out for a walk in my mum's neighbourhood on another one of the gorgeous days we had while there. 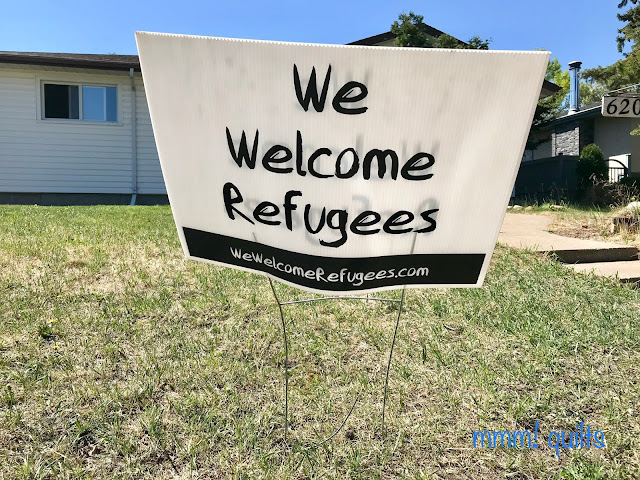 It reminds me today that I have to finish the binding on the first of my two H2H quilts and drop it off for refugees.

5. I have a new like: Blizzards. Can you believe I've never had one? 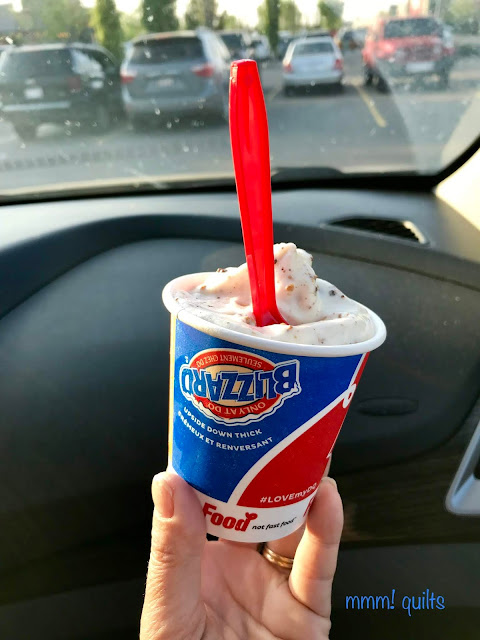 I know it won't be my last! I've had ice cream cake, and the hot fudge brownie delight is my favourite, but this? Salted caramel I believe, yum. Brianne took me there after a soccer game of Brady's.  I like watching my grandson play, and I was able to catch two games and two practices while out there.

6. I love music; CBC Radio 2 plays from 9am - 5:30 pm and is only pre-empted by WRCJ the Detroit classical/jazz station, or my iPhone docked into my stereo. Even when no music is on, I usually have some piece running through my head, and the pieces run the gamut from classical, to blues, to rock, both classic and new, to many vocal styles, light jazz, light opera, New Age, World, folk....there isn't too much music I dislike. Being back in Mum's house for much of our stay there in mid-May meant her radio had to be on, and I didn't have to change it; CBC was the station when I pressed the on button. She also loved Ici Musique, the French CBC, or Radio Canada, station, and like me, CKUA (which streams live online; I encourage you to take a wee listen). I often talk of music in my gratitude posts, and not having her around to tell about a piece I heard, and for her to listen for it, or for her to tell me of one she'd heard is another profound loss. CBC has the same programming which airs at the same time in each of our time zones, so being two hours ahead of Mum I could text her to say, 'Be sure to listen at 10:20 your time for this Rodgrigo piece, or Rolf Lisveland'... It's another hole I don't know how to fill.

7. Many of you may recall my mum's favourite colour was green, and that above all, she loved flowers. Her 80th birthday quilt I named 'Forever Flowers', and it now sits on the love seat in our living room. All too soon for it to come back to me... This Living Wall of green that my daughter Brianne told me is her favourite thing in the new part of the Edmonton International Airport captivated me. 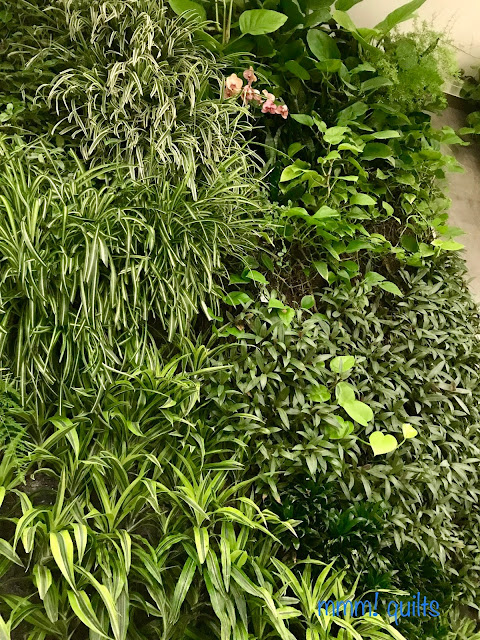 I can't explain the feelings and sensations I got as I gazed at, and then sat by this over 2-storey high wall, but I'll try: serenity, peace, the smell of the colour green (anyone from the north who lands in a southern Florida airport in November-March knows that green has a definite smell), healing, purity, the cycle of life, clean, balm, awe, peace... just scratch the surface. 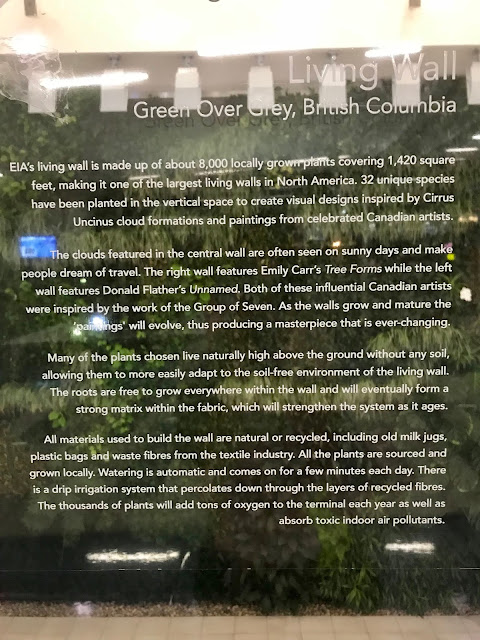 A shot from the upper level pedway to try to give a sense of the size of it. Think of a two-storey mall with an open space and you'll start to comprehend its size. That's an extendable ladder thingie in the lower right. 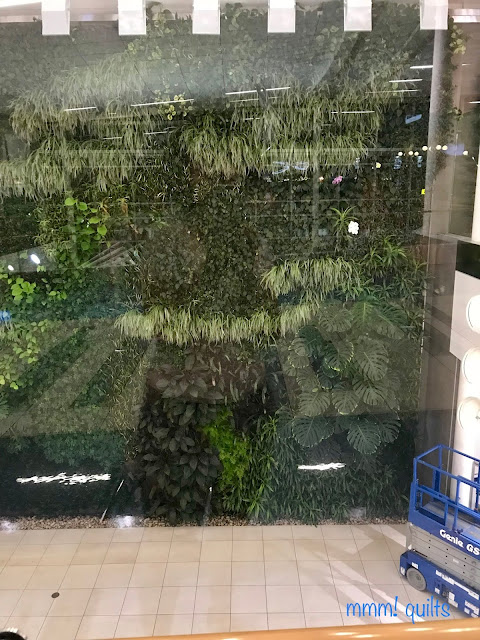 We need, no the world, needs more green.

8. I like auto racing. I spent three evenings of our honeymoon at a racetrack, no lie. Stock cars. My husband has been a racing aficionado his entire life. We went to the Formula 1 race at this very track, Indianapolis, the quintessential racetrack, eleven years ago. Little did we know then that it would be the last F-1 race in the US for many years, and the last one at this track. 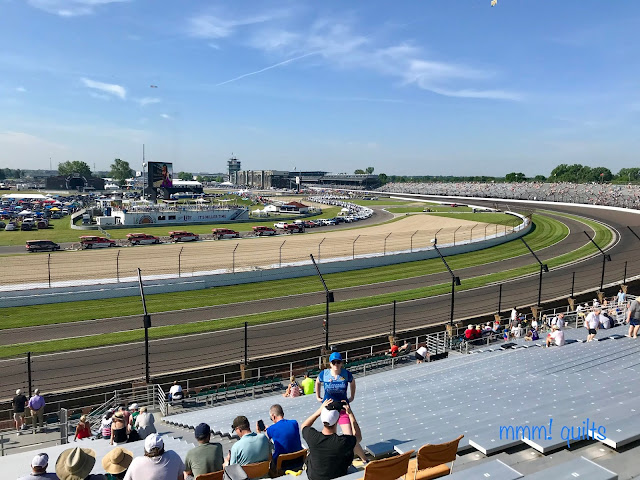 For MacGyver's 60th birthday, (yeah, I know, I just cannot be married to someone who is that age right? I was a child bride LOL...) Dayna bought him (us) tickets to the Indy 500, another one to check off the bucket list now. These were bought and hotel booked, long before his birthday, and who knew it would provide a good distraction for a couple of days after a very distressing and stressful time. It was as scorching hot as it was for the F-1 race, and we had to keep going under the bleachers to get a break from the 34C/93F humid temperatures. It was a great race. We've been to an Indy car race several years ago when they raced in Edmonton for three years running. There is nothing that compares with the sound, the vibration, the smells, the crowds, the ambiance of watching racing in person. Quite the rush. As we noticed before, the way the track is run is stellar: no clogged up roads going in (well, a little but nothing major), super-easy getting out (man, they have such a good system), lots of police directing traffic, excellent concession prices, except for water, which was $4, only $1 less than a beer, which is ridiculous seeing as you needed to continually drink; IMHO they need a purified water station like we have here in Kingsville for our Folk Fest, where you bring you own water bottle, which I did, and fill it for free. So much better for the environment, and good advertising for whatever water company, Culligan, I think, did ours. They did have a few public drinking fountains, which we did use to fill up my bottle a few times but ...

9. I like this outdoor 'Bonjour' metal bag which I always hang by my front door. I bought it in Montreal on one of the Quebec trips I used to take my students on. It's about 10 years old now. 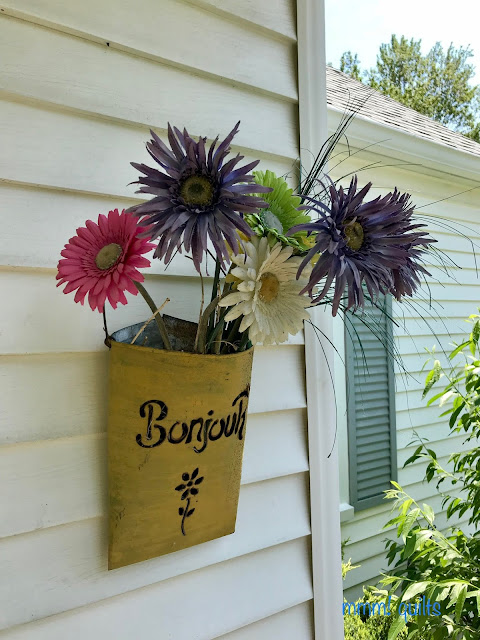 I love that this year it has been turned into a house... 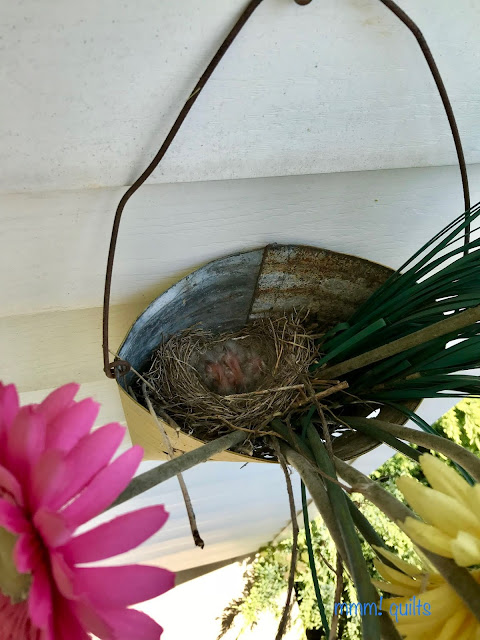 I'd noticed for a while each time I opened our front door a robin would fly from somewhere on/near the porch, and so I knew there had to be a nest, but assumed it to be in the eavestrough. Nope.
I think there are four new hatchlings in there. They are welcome to begin their life there.

10. Here's one a little farther along the path to living in the air. I found him the morning I wrote this post, May 30: 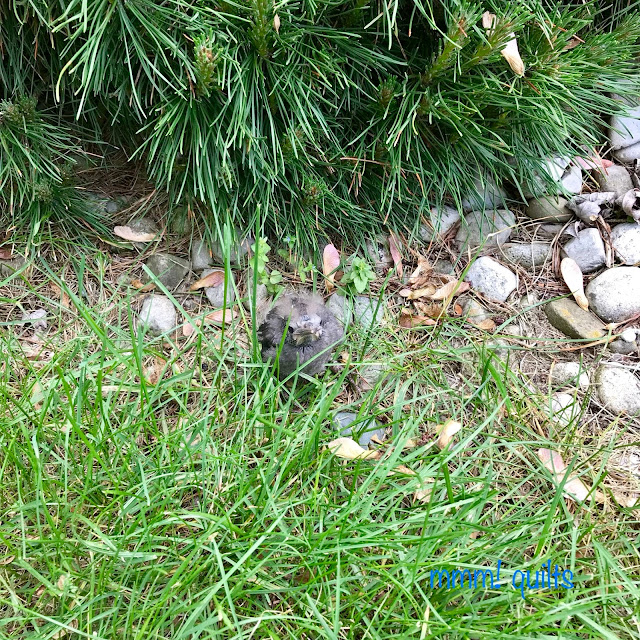 So I guess I like babies. Who doesn't, right. He hung around the front flowerbeds for over an hour. I know his parents were nearby, keeping watch, bringing him food, enticing and encouraging him to spread his wings. A good metaphor upon which to end this post.

Linking up
with LeeAnna at Not Afraid of Color where you will find several of us who write these posts. Feel free to write one and join us.
SaveSave
Posted by Sandra Walker at 6:00 AM