Better late than never, right? Here we go...again! This is one of my goals on my Q2 FAL list. 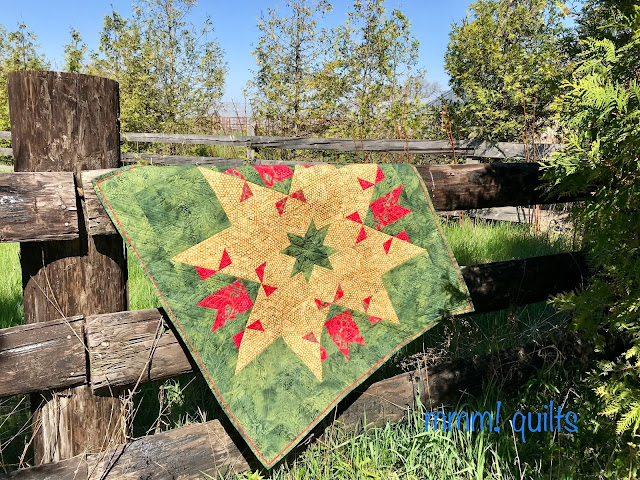 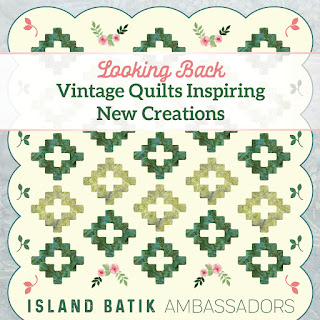 April's challenge was to create a new, modern version of a vintage quilt or quilt block. I love stars; it's no secret they are my favourite block along with the schoolhouse one. So I knew I wanted to do something with stars. The gorgeous rich batiks were provided to me by Island Batik, the threads by Aurifil and the batting by Hobbs. I just love working with these fibres! 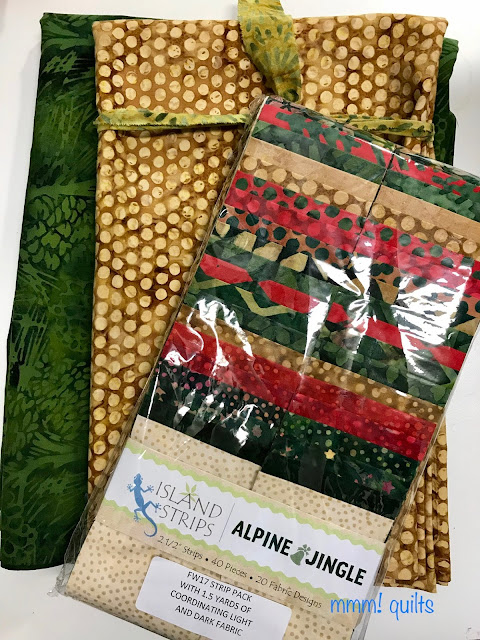 I chose to work with the Island Strips and coordinating yardage of Alpine Jingle that I was sent.

Why the delay? I knew I was going to work with these fabrics at the beginning of April. Well, a few things altered the supposedly smooth course of April: a quilt along that rather exploded in a lovely way, Postcard from Sweden, a rather major life happening, an upcoming magazine publication (eeeee!) with a rather tight deadline, and then a rather waffling brain in the design department. However, all the waffling means I do now have four new designs, all starry ones, just so you know...

I settled on this one, with a little input from my good friends, Tish and Judy. Not Punch and Judy, although sometimes it feels that zany when we get texting or emailing, FaceTiming or Skyping back and forth! LOL 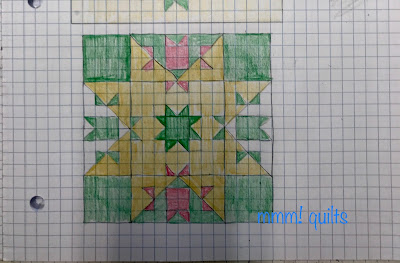 There's the settled-upon design, not in the settled-upon colours, because I realized I couldn't do it as planned, two red stars and two green ones, when I only had gold and green for background...the green stars would be lost and that just wouldn't do! So all four stars became red, with the large star being gold. And yes, it's yet another shadow quilt, super-imposed images I do love thee! Thees...them...whatever.

The challenge was to make a 36" minimum quilt, and so I'd planned that each graph paper square would be 3". Great plan, 48" finished quilt. Only problem? Island Strips. It's their name for a jelly roll, so they are 2.5".... No red Alpine Jingle yardage. All right, well we have 32" here, guess I can add a border. This is why these are challenges, right?

But I need 2.5" not finished HSTs. How does one do that when one starts with a 2.5" strip? 'Oh ye of little faith,' and no knowledge of the wondrous Pam & Nicky Lintott books.... or rulers that do this magically with the little dog ears, no, I don't like that term, with the little points cut off, that's better. I made a template because I couldn't find the one I'd previously made, in the previous house... (I've since found it, after the graph paper drawing became a flimsy, yup.)

All I did was sew two 3" squares together on the diagonal, cut apart, press, trim to 2.5" then press them flat again, RST so I had my perfectly trimmed 2.5" triangle. Off to the races! (After I picked out my four red strips of course. 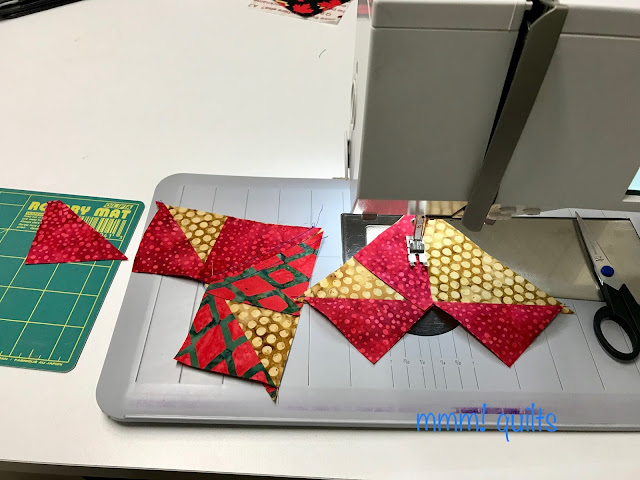 I love making No Waste flying geese, which is how I determined I would construct the star points, both blown apart (windblown? deconstructed?) ones and attached. I counted up how many I needed and what background they need to fly upon, and I knew I'd have to get a wee bit creative with my HST placements, as you see in the above in action shot! I didn't have to reverse sew much at all, just a little to keep me humble and honest. I also realized I didn't have any red yardage of Alpine Jingle to make the 4" finished star centres...what to do? Make a 4-patch, all four identical, one each of the four reds! I love a good challenge.

In no time at all I had the design starting to take shape on a section of the design wall in the guest room: 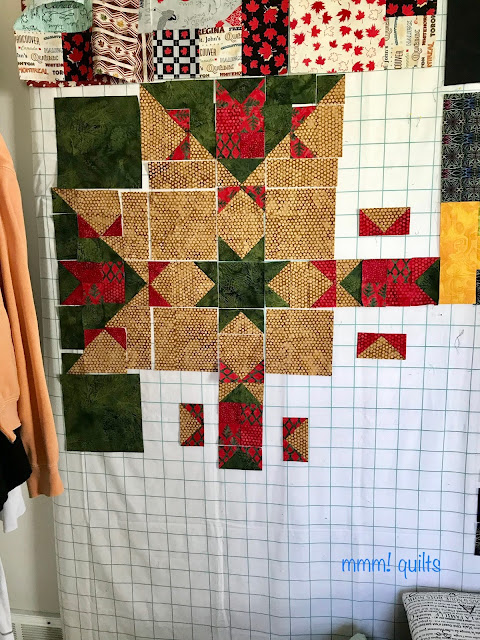 My design wall is 8X8", four pieces of styrofoam board snugged up together with the gridded flannel wrapped around them. Once the sewing loft is renovated, this will move up there so I won't have to run up and down, although that's good for the body! The cedar chest you catch a glimpse of butts up against half of the wall, and that is the door I have to push to if I want to use the entire width, which I needed to, as two other quilts in progress, Plus Playtime and one of my Hands2Helps quilts, besides this one, were on it!

How did I hit upon this design? Well, I was playing with taking star blocks apart, rotating them and putting them back together, meh, not so much, and then thought to partially explode, or pop them apart, leaving one set of points attached, and then thought that I could float a few on a big star, and then what if I had one intact star in the centre... I think not having all four geese windblown is a bit of a surprise, and having a giant star in the centre, ergo lots of negative space, is one of the components of modern quilts. Also, lots of modern quilts do have just one big block as the entire quilt.
I added a 3" border to bring the quilt up to size, well a little over now, but that's okay! This green batik is particularly lovely and rich, going from lighter olive-tones to rich intense pines.

I did have a minor mishap before that photo: 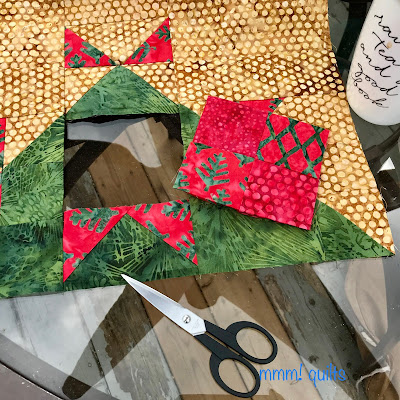 The one red strip has green trees on (love!) and within the 4-patches, I wanted them all to be standing, not lying down, so the quilt has a definite right side up to it. Thus, I had to reorient this one. Somehow on the trip from the main level design wall to the sewing loft, it got turned around...

It stalled again for a good day and a half, probably more all told, while I thought about quilting. Emphasize the popped apart stars? Connect them? Do flow quilting (modern) in the gold? Do straight line quilting (modern)?

The green quilting is loosely based on the quilting on Quilting Land's version Jellied Lone Star. I like the look of 2-3 lines together, then a 1/2 - 3/4" gap, so I went with that. I also like quilting designs that appear to weave under the piecing, like I did in my Rainbow Kitty Rows. 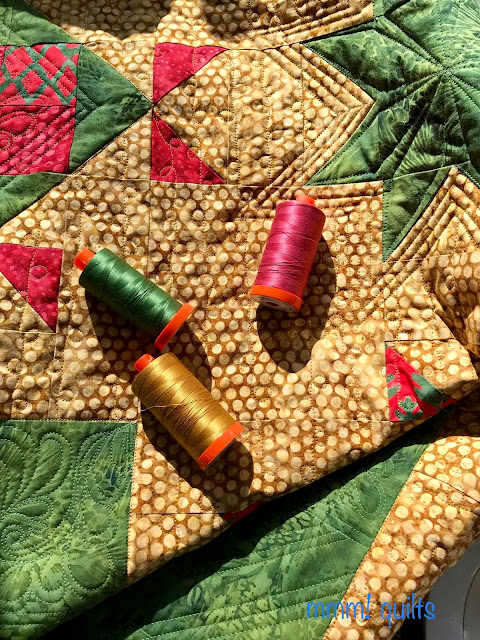 and a couple of my trusty quilty teachers for more inspiration: 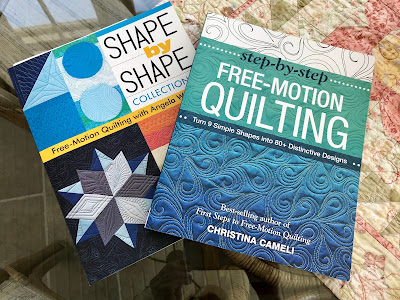 I set to work. 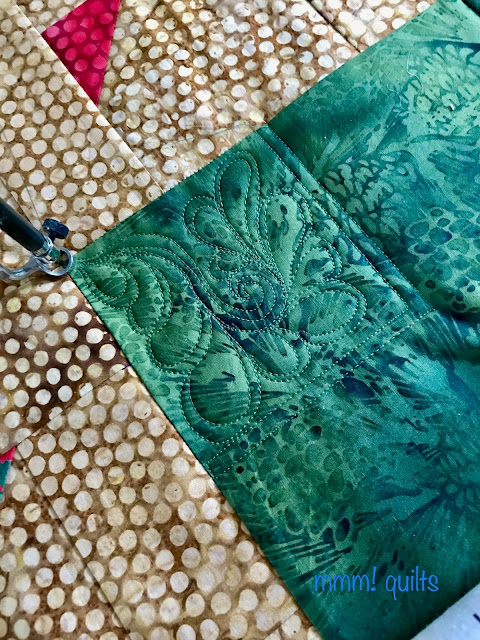 This feathered spiral design of Angela's went in the four corners. 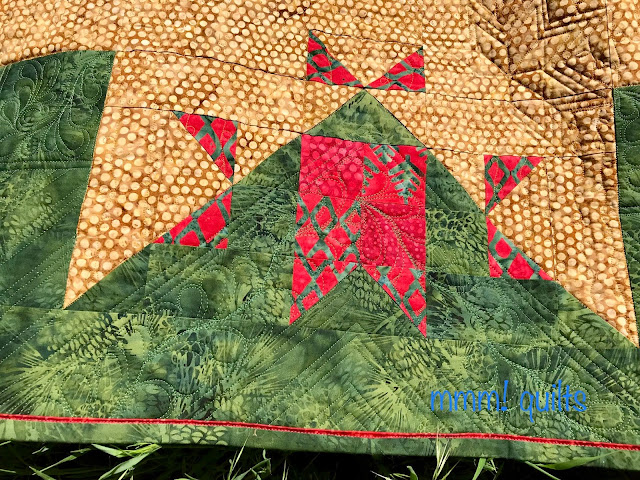 Lines radiating out, something I wanted to do right from the get-go, but then I did a feathered vine through the central 'v', ignoring the windblown star.

I really thought it would be so cool to do largish pebbles in the large gold star...but I was already late with this quilt, and we all know pebbles take a while... I also knew I wanted to do two or three ghost stars in that gold. Tish said maybe swirls, and I nearly did, and then almost did large pebbles echoed 3-4 times, a design that both Angela and Christina have in those books! Finally, one of Christina's spoke to me, 'Lithe', the perfect combination of pebbles and lines!

Even in real life it is extremely hard to see since the thread and the design blend into the dotted batik so well. I did a dot-to-dot design in the centre green star to emphasize the diamond shapes and fool the eye a bit.
Here's a ghost star closeup:
You can see the Lithe motif that runs vertically in the gold large star. I tried this morning with the lower, early morning sun:

The cedars provided a bit of a Christmassy feel to this Christmas quilt.
I had enough, well not quite, as you see, of the gold to do the back: 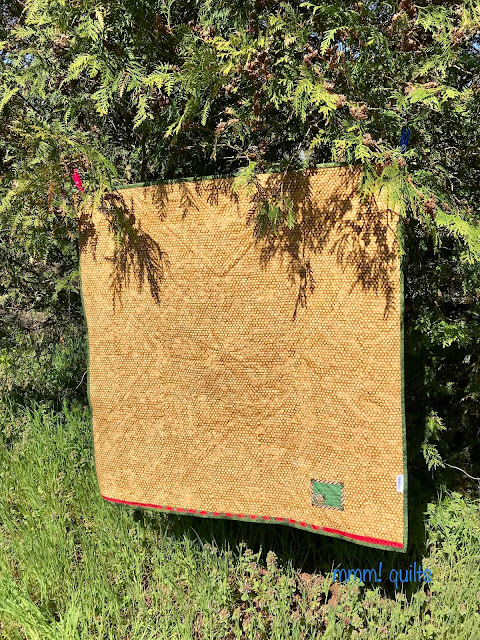 I'd hoped to have a full 2" at the bottom but I guess I snugged the quilt up against the top rollers more than anticipated, so I just have an inch, almost half of which is covered with binding!

The label:
One last shot: 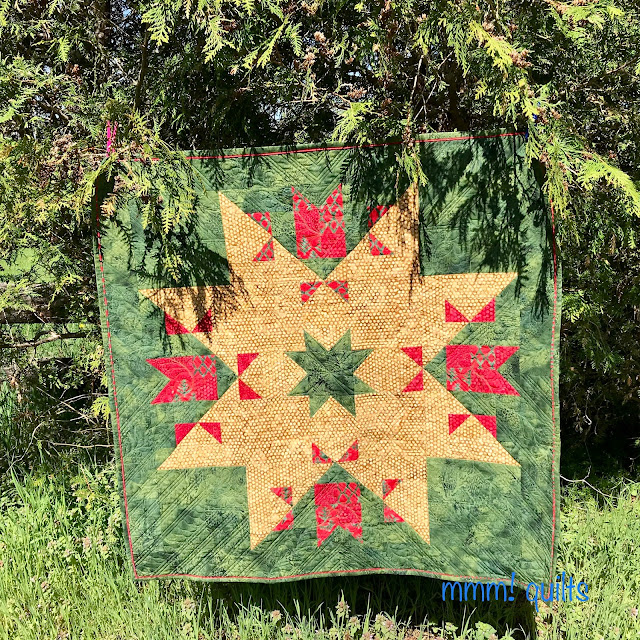 May's challenge is creating a pillow aka cushion, and I have a gazillion ideas in my head for it! Maybe I'll be early this time?? Thanks so much to Island Batik for this challenge; it feels so good to play within parameters like this, and fuel the creativity!

Linking up:
Sew Fresh Quilts
Freemotion by the River
Confessions of a Fabric Addict
Crazy Mom Quilts
TGIFF at Summer Lee Quilts
Dizzy Quilts for the Q1 FAL
Posted by Sandra Walker at 9:26 AM