Welcome to the June edition of Drop Everything And Make it! where we celebrate all things squirrel. As in chasing those shiny bauble-type projects that grab our attention and demand to be made, and right now. Wendy of Pieceful Thoughts sent me this in early May: Awww. I mean who could resist cuddling one of those sweeties, eh? Let's see what squirrels of the quilty kind were shared last month, and then share any you may have chased in June in this month's linky party!
There was just the best, most quintessential DrEAMi shared at the end of May by Preeti of Sew Preeti Quilts. She describes how she went to get the batting roll to layer her Trinket quilt when a roll of vinyl fell... "Three brain clicks later, the Trinket flimsy was abandoned and I was sewing little 2.5" squares together." This is EXACTLY what happens. 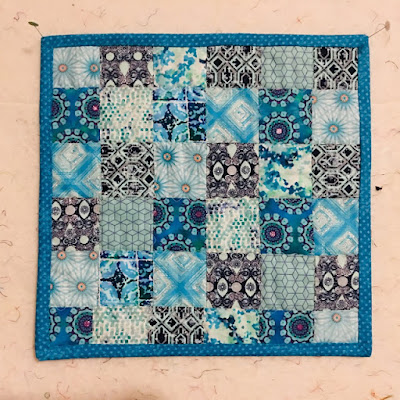 Front of pouch all done, like all in one sitting, do not stop, do not pass go, do not collect $100, just SEW already!

Roseanne of Home Sewn by Us also had the perfect DrEAMi. I may have had a hand in tossing it in her general direction... 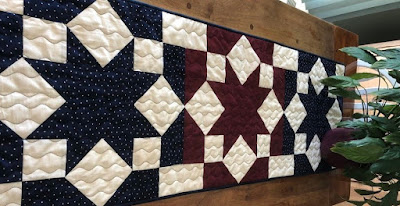 She was thinking of making a red white and blue runner for the Fourth of July, thought of making pinwheels so HSTs, but then she saw my Sweet Star blocks, showed Sue, and, in Roseanne's words, "...BAM. She auditioned fabrics and here we are. We don't let any grass grow under our feet when four-patches and flying geese are involved." Totally done, useable product. I like the photo below too, with the patriotic little angel I believe. 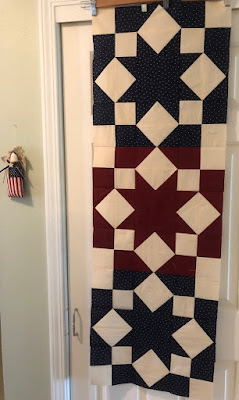 I had a DrEAMi as well. I was talking to Brianne about her placemats, and somehow we got onto the top of straws, and did she have her own reusable one (yes, as do I), and she asked me to make her a case for hers. Great idea! Later, Brady put in a request for a case for his chopsticks, which he takes to restaurants, and is very adept at using them.
I made him one.
He loved it.
I forgot to get a photo.
and...
It's gone now back home with him. I didn't get Brianne's straw case made before they left (subtext, Brady takes priority lol), so, instead of working on my July and August Island Batik projects, or Brady's football quilt, I just had to make Brianne's case. And well, might as well make myself one for my straw too! 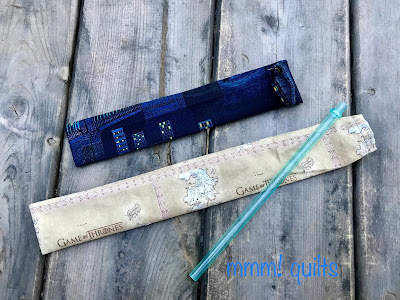 Mine is a scrap of NYC fabric from my (gulp) 07 trip and hers is Game of Thrones fabric. I put a piece of velcro to hold the top folded over. Perfect! I feel so very pleased at having come up with this idea, as it's been a bit worrying as to where to keep my straw within the vehicle...

The other ongoing type of squirrel is the Tiny Tuesday blocks, and since I didn't show any last week, I have four for this week. 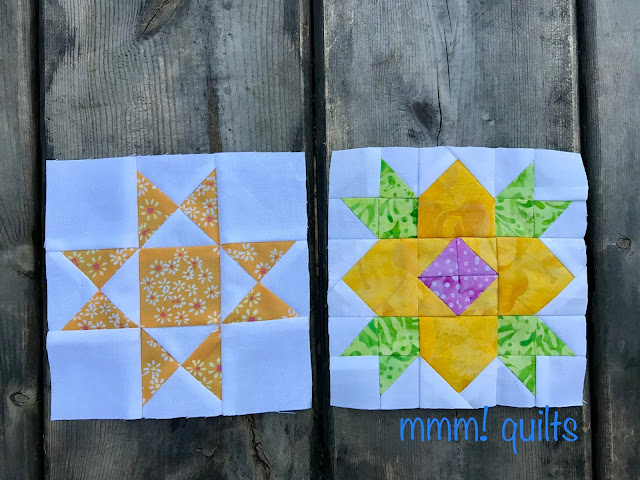 Two more from February, so that leaves just one and then on to (or back in time to) January's blocks. I just love these sweet teeny blocks!

Back to the present, here is last week's basket block 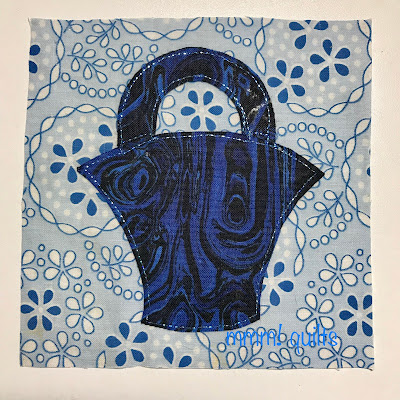 I used Lara's Crafted Appliqué method, my favourite for appliqué, and Sulky Metallic Holoshimmer thread to accent the basket.

Here is this week's, Monkey Wrench, which I know as Churn Dash: 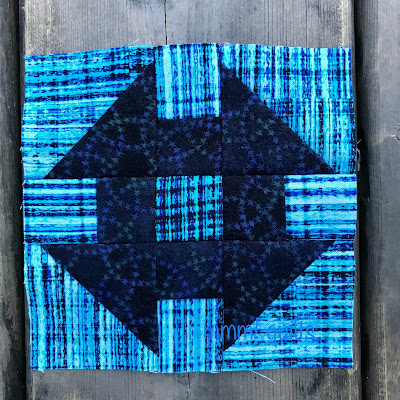 All right these are now off my brain, so maybe I can focus on Island Batik and Brady's football quilt!

An all-important question for my readers I meant to add last night when I wrote and scheduled this post:
Sewing room lights: what do you have? In the former upstairs half-storey attic-type place where I sewed, I had fabulous industrial type (apparently, now MacGyver tells me) fluorescent tube lights which I loved. They kinda don't look the greatest in my all-new room. So far, quilting in the basement bedroom on Avril under the pot lights is not great, lighting-wise.

So I'm curious! What lighting do you have/do you want/would you recommend? Please let me know in the comments.

You are invited to the Inlinkz link party!
Click here to enter
Linking up
so scrappy