Musings from My Melon and Mermaid Cove Update

If you follow me on Instagram (mmmquilts), you'll have seen the recent progress of the November challenge for Island Batik. We were to dig around in our sewing rooms to find any sewing tools, and make a lap size or larger quilt. I chose to work with the Mermaid Cove line which is beautiful. I chose to work with my Sidekick ruler, but ended up also using the Hex N More ruler a bit as well. These are both from Jaybird Quilts and came with the pattern book and kit that I snagged on a Massdrop which I now see is just Drop, deal. Because I was limited to 2.5" strips and four yards in two coordinating colours, two of each, I wasn't able to make all the block variations in the Gravity pattern for a few different reasons, large central hexagon for one, 2.5" wide strips for another. Yes, I could piece strips together to make a 4" piece of fabric, but then some of the shape was lost. I ended up making some of Julie's triangles and created some of my own. Here is the flimsy thus far: 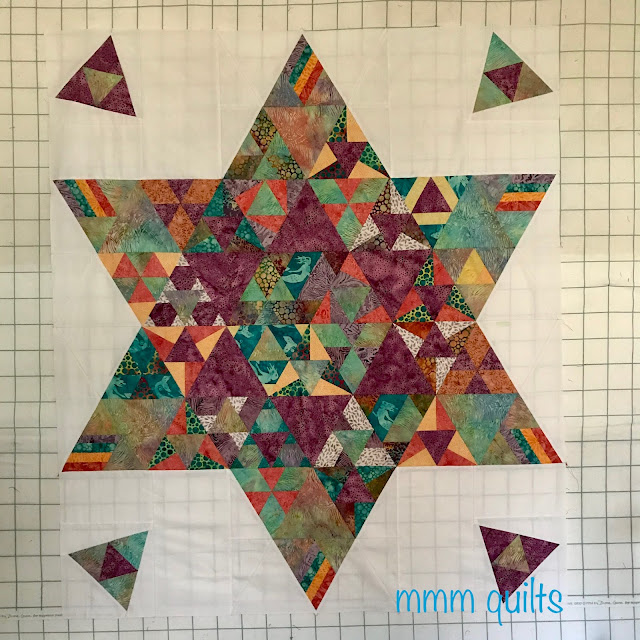 As I mentioned in my previous WIP post, this has been a good tax on my brain. Doing the math to make some of Julie's triangle blocks work, playing with geometric shapes within the triangle block, figuring out angles, especially to get those four corner floating triangles where they are, doing math to make 2.5" strips work within the 6" tall equilateral triangle was all good exercise. 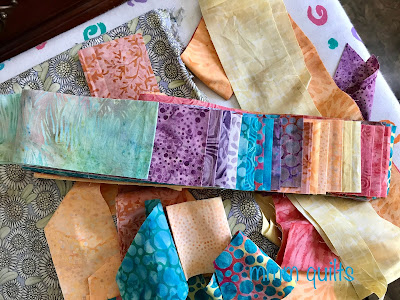 The other rather enlightening thing I learned, is watching myself work within the restraints, as well as within a foreign creative framework. Normally I sketch a quilt, draw it out on graph paper, break it down into parts and then do math to construct it. Not so with this quilt! I started without a clear idea of what the finished quilt would look like. I was drawn to one on the sidebar of Julie, Jaybird Quilts, website, which is why I started laying out my triangles on the design wall as below: 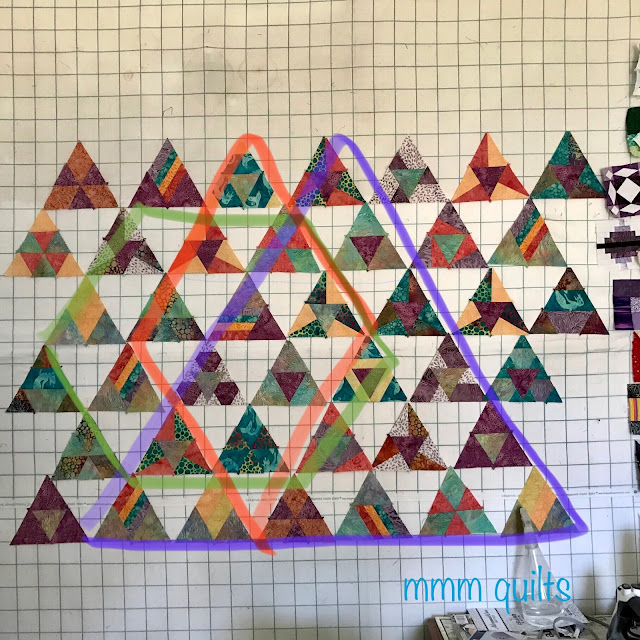 After I had about this many up there, and oh yes, they are addictive, and you can't make just one of a certain design, I 'saw' a large triangle (outlined in purple). What if I made a shadow triangle behind the small triangles?! I'd already thought to set the small triangles in 'stripes' of white, grey and black as background, or maybe all the greens, coral seaweed-type batik... Lots of ideas germinating as I made more of these babies. Then I saw a hexagon shape (green outline) and a diamond shape (orange outline) and thought I could do a diamond shadow...

Or..
What if I could make a diamond with my small triangle blocks? I could... Which led to, what if I made eight diamonds into a STAR?!!

Once I started laying my triangles into a diamond for 1/8 of the star I realized these are not 45° triangles, but 60° ones, so I only need six diamonds...duh. 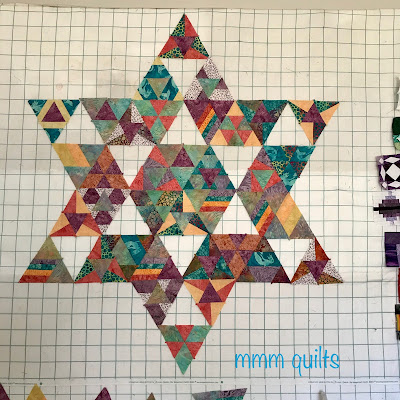 Then I spotted my rainbow diamond within a triangle blocks (my own spin on a two-strip one of Julie's); wouldn't they be cool as the star tips? And, well look at that: I happened to have made six! 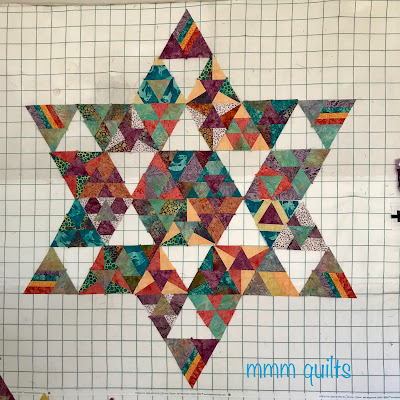 I was giddy with excitement here. And, I had enough blocks, well I had six leftovers...Background was next. White? Maybe. Put the purple on the outer ring of triangles and make half-triangles in the 'arms' of the star points so it looks like a ring is behind and through the star? Maybe the green?

Accentuate the centre hexagonal star?! I tried the green first, as I wanted it to be a subtle centre star, kind of an 'oh!' moment. Those six extra triangle blocks? I thought why not have them in a burst around the star? My math brain groaned. Half triangles and triangles could make them into squares, I argued. 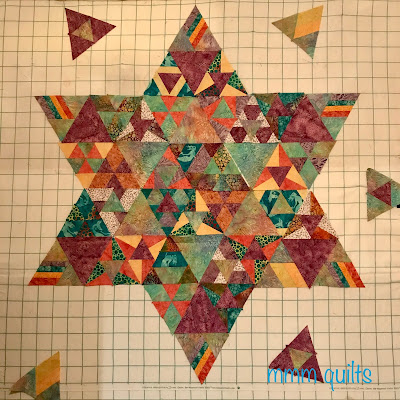 I'd thought to leave the outer triangle 'ring' white, so I cut a few triangles and placed them there, but they jumped out, so I tried the purple.

And here is a musing: had I known ahead of time what I was doing, I would have bought the exact amount of fabric required, maybe slightly extra, but fabric is expensive, especially batik. Because I didn't know ahead of time (and hadn't drawn this in EQ - in my brief research on it I don't think you can do triangle quilts, but I could be way wrong), I was experimenting with fabric, and because I had two yards of the purple, the white (more than 2 yards) and the green, supplied by Island Batik, I had no guilt at just cutting six triangles out of it and trying it. I was free to play.

So this is another reason why I am so vehemently FOR supporting the Arts: to have the funds to not worry about using some of a medium, be it paint or brush, film (pixels, data), wood, fabric, TIME, etc. is so freeing to an artist, to a maker. And it births beauty, in the form of artwork, music, books, film, sculptures, and so on. Shame on governments who cut this funding.

Once I put the purple on the design wall, I didn't dislike it as much as I'd thought I would. I decided to try it in the centre star, because the green was just too subtle. 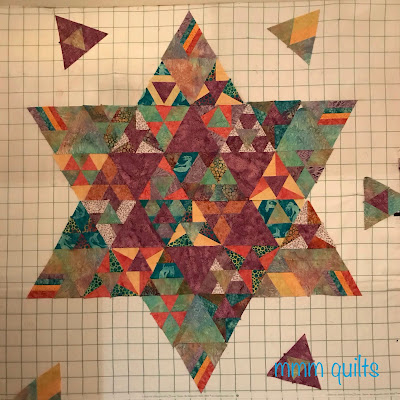 I liked it! These were night time shots, so excuse the strange lighting please. 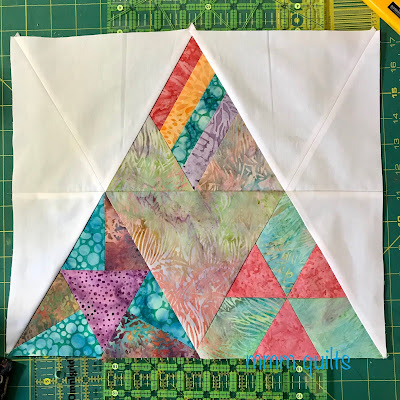 That wasn't so bad, turning triangles into a square well, as I learned, not quite. These blocks are 12.5 X 14.5" unfinished.

Now, what if I didn't angle the triangle (ha, say that out loud) bursts, but set them as you see below? 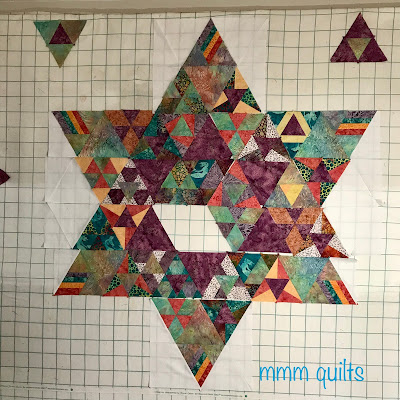 So I did some figuring with a piece of paper, setting the 60° triangle at a 45° angle on a piece of paper, and drawing in the two side triangles, making them into a template and cutting them a little larger than needed so I could square up these corner blocks to make the flimsy as it currently sits. 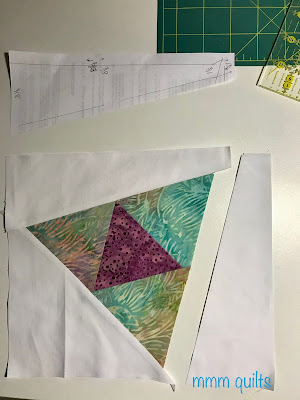 I just have two triangles left, and I think I will make them into my quilt label for the back.😇

I had a brainwave in my Ashtanga yoga practice this morning about the borders, because I do intend to put a narrow white one and then had thought to use the green and coral seaweed one as the final border. More triangles! 2.5" ones joined in a strip! However, since there are but three days left in the month, I had another thought as to how to still do that, but not all the way around the quilt.

Hope to see you back here on Saturday for the final quilted up quilt!

As many are saying, we are all inundated with Black Friday ads, but I just wanted to remind you that if you do do some online shopping, remember to click through a blogger's links if you'd be so kind, mine or another's. It doesn't cost you any more money, and is a good little thank you to the bloggers who provide reading and inspirational material! I am an affiliate for both 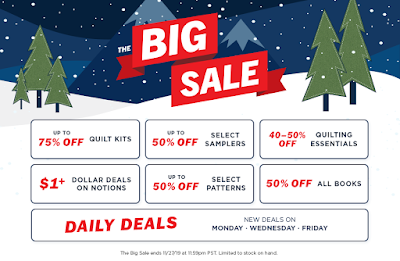 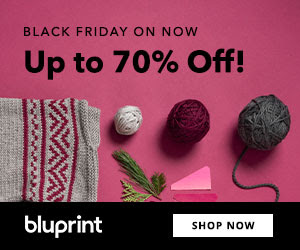 For Small Business Saturday, my patterns (all five of them!) are discounted by 20% until Sunday in my SandraJaneQuilts Etsy Shop. No coupon needed. After making the graphic below, I noticed: blue, pink and yellow seem to be a theme... Need to explore some more colour options!

Posted by Sandra Walker at 2:40 PM

Email ThisBlogThis!Share to TwitterShare to FacebookShare to Pinterest
Labels: WIP