Just Call Me a Bag Lady

Two finishes on a Friday, with hopefully a third this evening!  These makeup bags were on my Q3FAL list.  I have just found out that they WILL qualify, since Adrian at On the Windy Side, host of the linky wrote on Monday, and I quote, "...opening soon on September 30, in fact. You'll then have a week to get your very last minute finishes done and linked up before the linky closes on 6 October at 11 pm PST."  Woo hoo! Not that I have ever won one of the fabulous prizes, but still, it's a good feeling to have another goal done! 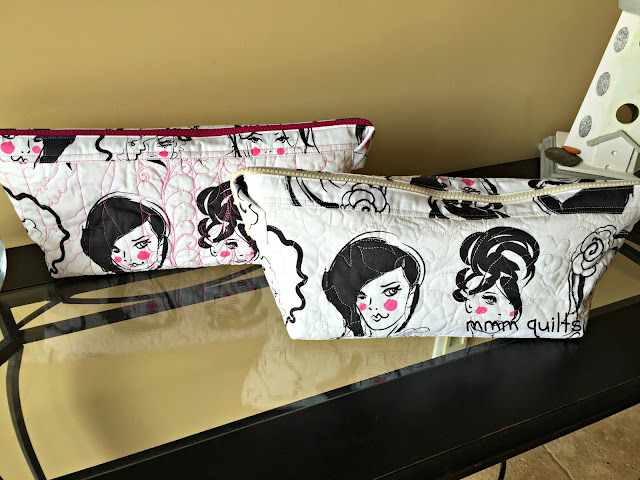 This is a pattern by Lazy Girl Designs, a bag I have made, oh, six times to date sewn with a perfect Art Gallery fabric I got this past spring from fabric.com for the outside of the bag.  I have two of these bags, in different fabrics, and I use and love them both.  These two are for my daughters, Brianne and Dayna.

I did Fervent from Christina Cameli's book, Step by Step Free Motion Quilting on Dayna's bag, which is the all white stitched one.  On Brianne's I was going to just do some straight-line walking foot quilting, maybe a little matchstick quilting...but as you can see I didn't.  I did a ribbon in one section, and Impulsive out of Christina's book, which is harder to do than it looks in another!  Once I was done, I realized it mirrored the tendrils around a couple of the heads! Wish I could say I planned that!  Feathers went in the centre two sections.  I don't think there is a quilt yet that I haven't done some kind of a feather design on... 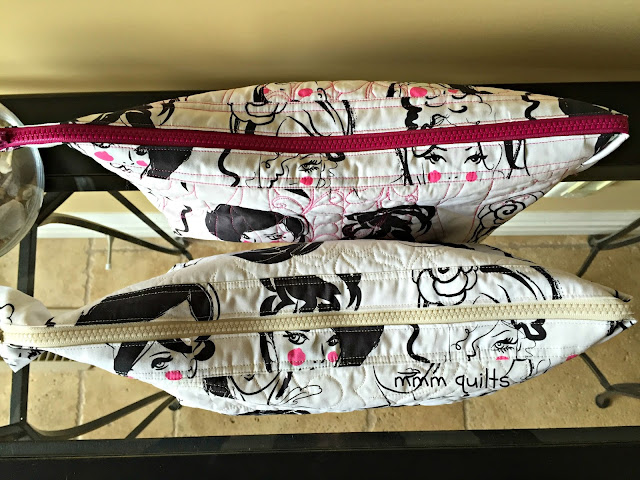 The pink zipper was bought with a bag for Brianne in mind, since she actually admired my own pink poinsettia one I first made about 5 or more years ago, and said, "You should make me one."  This is the daughter that does not like quilts.  I sent her a photo of this fabric, asking if she'd like a quilt out of it, but nope.  When I said maybe a makeup bag? she said yes.  The ivory zipper was bought with a jacket for myself in mind, but with the zipper tabs I have come to know and love, it was easily cut down to size for Dayna's bag.  Dayna loves quilts.  They 'migrate' to her house on a regular basis, most often in the winter when she thinks they are lonely all by themselves while we are in Florida.  I like that serendipity struck again, when I realized that the zipper plackets almost lined up for the face and hair sections of the heads!  However, the hair is not specific to the head it's perched on but you'd never know that unless I pointed it out. 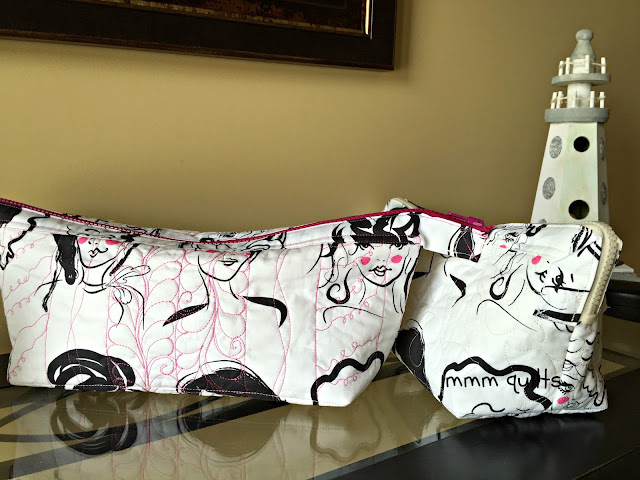 On one side the heads are nicely centred, but on the other, as you can see on Brianne's bag here, they aren't.  I sewed down the zipper tabs on one end of each bag, as you can see on Dayna's, and left the other end sticking out so you have a place to grip when opening or closing the zipper.

Brianne's is lined in the polka dot pink which I found in my LQS in North Port, FL this past spring.  Dayna's is lined in the same line, Art Gallery's Cherie, French text print.  For the pockets, 4 on one side, 3 on the other, Brianne's were done with that French text print and Dayna's were done with a Timeless Treasures shoes print (she LOVES shoes, has done since she was about 2 and would clomp around in our tiled entryway in each of my piano student's shoes, finding the ones that clicked nicely on the floor). 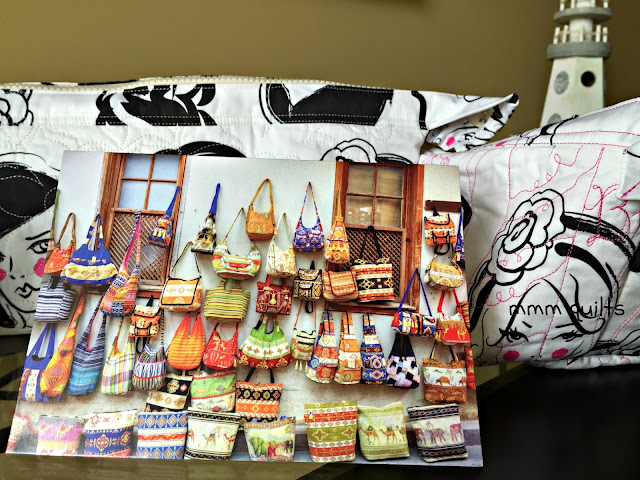 This arrived in the mail two days ago from my mum.  She wrote inside,
To one "bag lady"
From another
Think it's a thank you for the bag I made her this summer.  What a great card!

This is the third quilted makeup bag I've made each daughter!  They each got a Pyramid Pouch, and several years ago a little bag with handles from Quilts 'n More magazine.

I'm also linking up with Crazy Mom Quilts, Confessions of a Fabric Addict and TGIFF as well as with On the Windy Side. 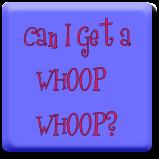 Posted by Sandra Walker at 3:14 PM