The quilt sat for an entire week while I hemmed and hawed about binding.  Consulted my three J's.... Julie. ... Judy.  Thought some more.  Mentioned it to Jasmine.  Ha!  There are FOUR J's......
Even dragged J...., er MacGyver, downstairs to ask him his thoughts.  (I'm not allowed to use his name or his photo, except for the one shot where you see his hooves in his proverbial flipflops as he holds Blue Ribbon Stars).

Jasmine's random comment, "Have you considered...?" (which I had, but dismissed, thinking it would take too long and be too fiddly) ended up being the binding decision:  scrappy rainbow binding using fabrics in the quilt.  I'm so glad I did do the extra work for this!

Oh well, the way I see it, I have the makings of yet another scrap quilt!  This is Cynthia's Scrap-a-Palooza quilt #16 from July.  I loved the effect I got when I rotated the top two blocks in the set of 4: the spots became wings.  You can see the spots layout in this post.  I really really like that layout too, so you never know...another may just happen in my future!

This gazebo is in the park that is on one side of our lane.  I've thought it would make a good spot for a quilt shoot for some time, so decided to try it out tonight in the setting sun. 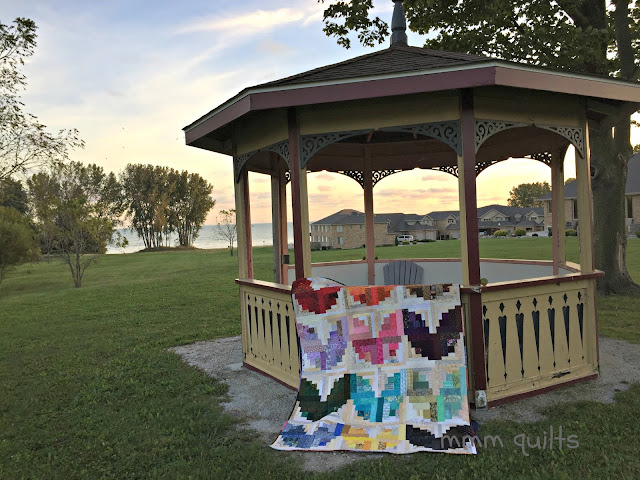 I realize just how important it is to get sunlight on the quilt to show the quilting and the texture.  Here you don't see much at all, but the colours are true.
I changed threads a lot.  Remember Avril was not a happy camper with the Sulky Blendables in 12 weight?  My Bernina loves it.  Avril was also not really a fan of the Sulky Blendables in 30 weight, but she grumpily did what I asked.  She loves Isacord, Aurifil, So Fine, YLI, Coats and Clark variegated.
I had taken the quilt off the Avanté with two echoes of the cloud-like swoop-dee-swoops in the wings, and then I thought, nope, too much unstable fabric, too much poof... 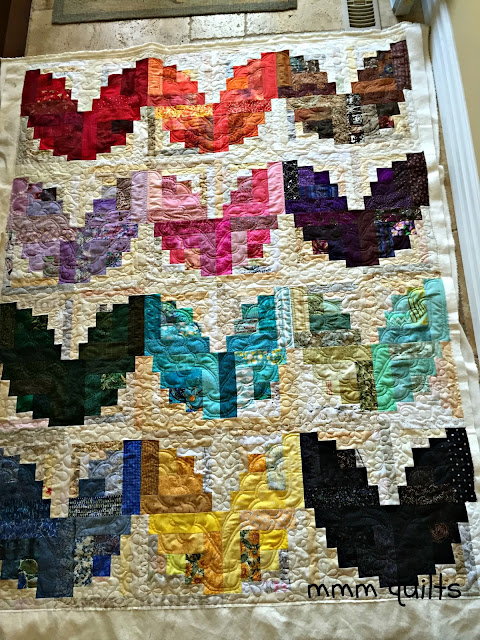 so I went back in with my Bernina, and did a third echo of the outside swoop-dee-swoops, and then a wavy line in the inside ones to flatten things down a bit.  It really wasn't that much more work, well it kind of was, but it was totally worth it. 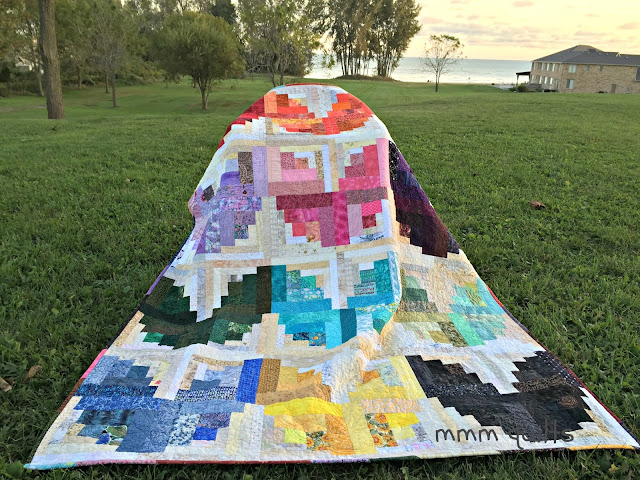 I used one of the ratty chairs in the gazebo for draping the quilt.  I noticed there are nails in the top face boards(?) of the gazebo, so maybe I can get some rope, grab some clothespegs, and make myself a better hanging line for my quilts.  Never mind what the neighbours will think of me now...

Here is the back, that delicious paisley-sculptured Minky Cuddle I got at Miller's Dry Goods this summer.  I'm so glad I treated myself to some of this!
Bella is in love with this quilt.  She cracks me up; as SOON as I lay a quilt down to either look at it, decide on batting (in this case) or a backing or whatever, she does this:
She has tried to burrow under it, lie on it, à la Tish's Oliver, while I was quilting it and binding it...sigh.  Cats just have to be a PART of every stage.

Oh, I did a loose loopy and simple flowers meander in the background.  The shot below also shows the third echo and wavy line I added a little better.  This extra quilting didn't detract from the plushness of the Minky one bit. 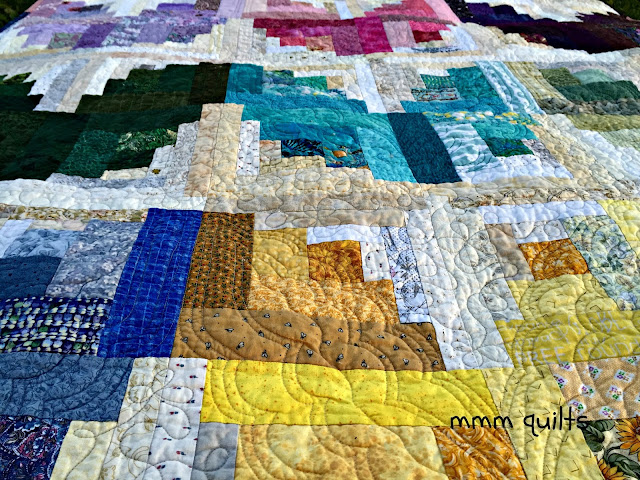 Linking up with Oh Scrap! At Quilting is More Fun Than Housework. Lots of scrappy ideas over there!

Posted by Sandra Walker at 3:00 AM