Creamsicle Wheelchair Quilt #10 and The Stack!

I got this finished last night, but have only just now sat down to write the post, a couple hours after a lovely dinner with our next-door neighbours who are Florida bound in the morning.  I'm really happy with the way this quilt turned out.  It is also a goal on my Q4 FAL list at On the Windy Side.  The orange and pink on the white background kept me thinking of creamsicles from the popsicle man who used to pedal around the neighbourhood when I was a kid.  So I named this quilt Creamsicle. 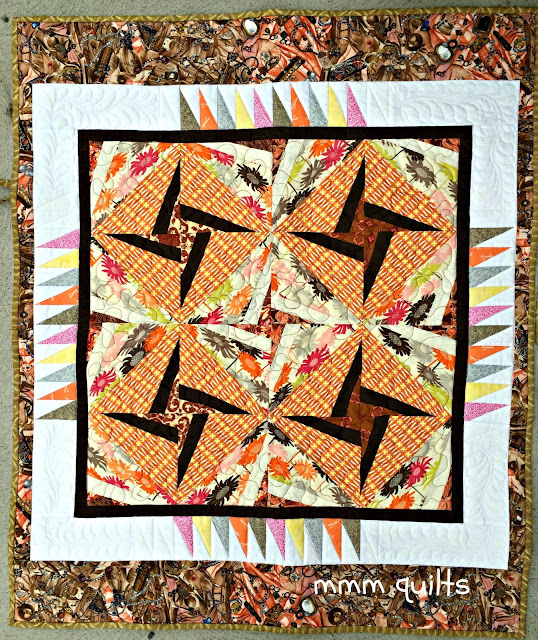 You may recall this quilt started with the four paper-pieced blocks someone had donated to sell at the quilt show in September 2104.  I sewed them together, and then started building around them.  First I put the chocolate brown frame on, and let the quilt simmer.  When I was working on Stardust, I saw a similar half-rectangle triangle border around a pink quilt in the Two From One Jelly Roll book, and knew it would work with this quilt.  I pulled some colours from my stash that are in the floral fabric.  I used That Patchwork Place's Birangle ruler, probably not exactly in the way it is intended, but, hey, it worked perfectly.  These aren't paper-pieced, but they turned out pretty exact.  I had the HRTs all face the same direction to enhance the twirling effect.  Bella approves of the chocolate browns in the quilt: 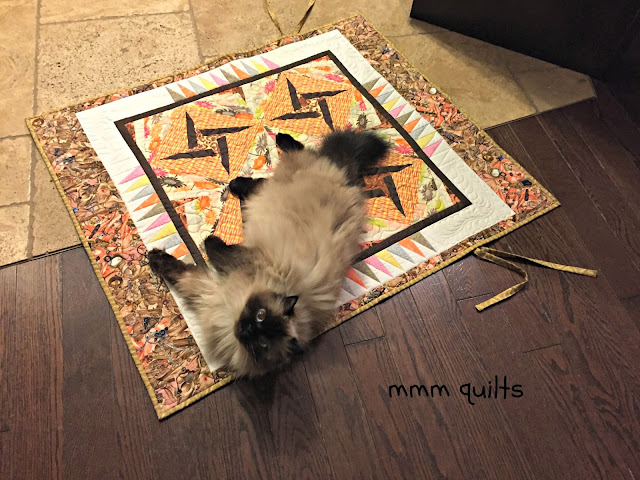 Once the pointy borders were done, I had a 30" square, so I knew I needed to add length but not width, and I started hunting for a fabric that might pull some of the colours together.  I remembered this fabric in my stash of backings, and had a "SCORE!" moment when I put it beside the quilt.
I put a 4" border at the top and bottom of the quilt and a 1" border on the sides.  The binding and ties is Kona Bay gold (it has a gorgeous hand much like Art Gallery fabrics), one I'd grabbed as a potential fabric.  I used the last of it on the back, which is made from the last of the emerald green wide-backing, and a plaid piece all from the guild charity fabric bin.
For the quilting I wanted it fast and easy, and tried really hard to do the jigsaw-style meander you see in the centre of the quilt ALL over the quilt...  I almost did.  I did the jigsaw meander in the borders, and in the centre four blocks, where it helped to tamp down some of the bias poofy areas.  And then I did some ghost half-rectangle triangles in the white areas, and then, yep, fun feathers. 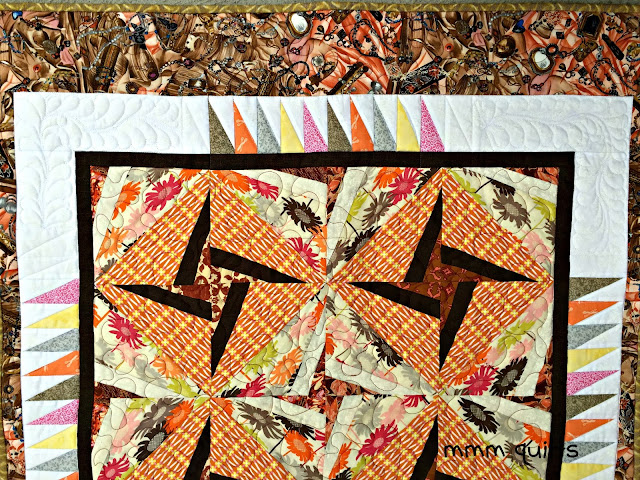 A few things are wrong with this quilt, and I bet you didn't notice!
1.  The centre brown fabrics in the pinwheels are on top of each other instead of diagonal from each other.  Did not notice until I had the centre pieced and framed.
2.  The white is not quite right.
3.  I should have quilted the feathers going in the opposite direction to enhance the spin; the way I did them, they compete with the HRT direction.  I didn't see that until writing this post.
4.  I forgot one ghost HRT.
However,
Does any of that really matter? No!  This isn't going into a show, and I know it still looks pretty hip, and will warm the lap of a senior in a wheelchair. :-) AND!  The tension woes I've been having from time to time are now solved thanks to a YouTube webinar from Handiquilter that Jasmine of Quilt Kisses sent me.  The trick for stopping the rayon thread in particular from shredding?  Longarm needles have round shanks, so carefully setting it into the machine with the eye at 5:30 instead of straight-on 6 o'clock can stop the shredding.  It did for me.

I've mentioned being excited to take the picture of the final stack of wheelchair charity quilts I've made for our guild's Christmas project.  Drum roll...
The first two I donated on my own to a seniors' residence here in town.  Those first two sparked the guild's project.  Here are the eight I've made for the guild spread on the patio: 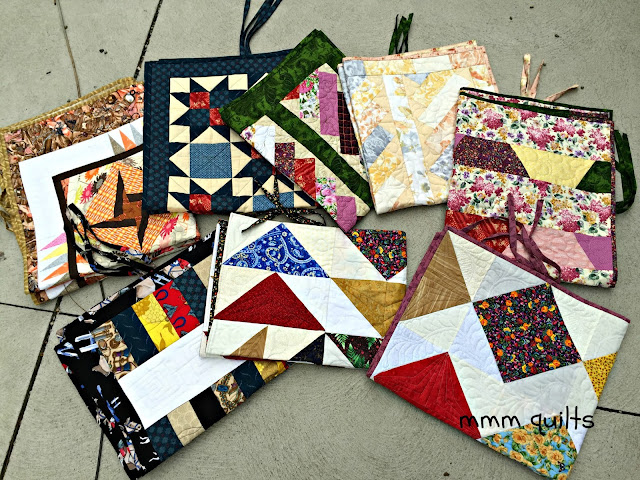 When I stacked them back up, it just so happened that all the ties were on the same side, so I had to set them that way for one more photo: 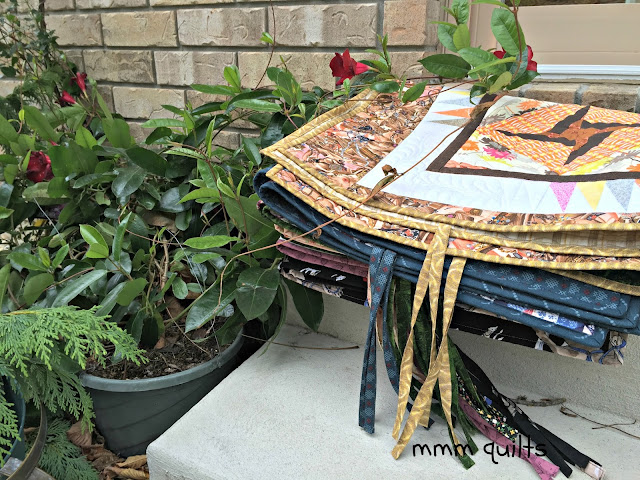 Linking up with Crazy Mom Quilts, Confessions of a Fabric Addict and TGIFF.
Now I am working on my own stuff!
Posted by Sandra Walker at 10:30 PM