Phew, sneaking in under the wire (15 hours left), not because I have put it off, but I've written a post each day this week, something that hasn't occurred in a while.  I thought the list was going to be short, just two items, yep, carried over (massive sigh from me and from my daughter, Dayna, I can hear it now) that are horribly neglected and, as a result, long overdue gifts. 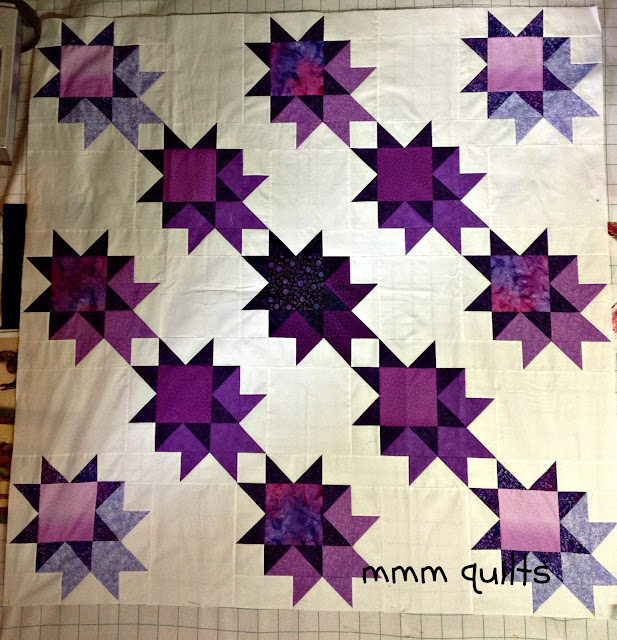 Dayna's grad quilt, my own design.  Needs borders, for which I am pretty sure I now have a plan.  And massive quilting in all the lovely white space, about which I'm very excited, now I'm feeling pretty confident on Avril! 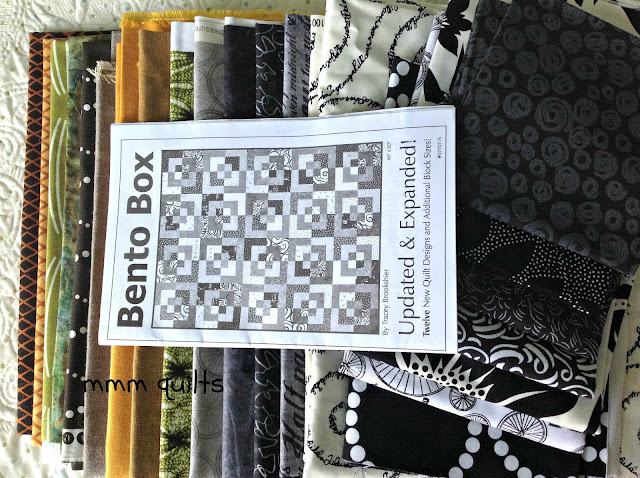 My nephew's happy new house revamped quilt, with different fabrics bought than the original plan.  This has been in the percolating stages for over a year.  For shame.  Yet one good thing is that in the early spring I got a peek at his basement, which he  is finishing, so that is what led to the new colours.  A good friend and I bought the pattern together a year and a half ago at the Sarasota guild show.


I thought that'd be it.  Focus.  Ya, me right? Fat chance.  So here are some other projects that have to get done this quarter, so I may as well put them on the list. 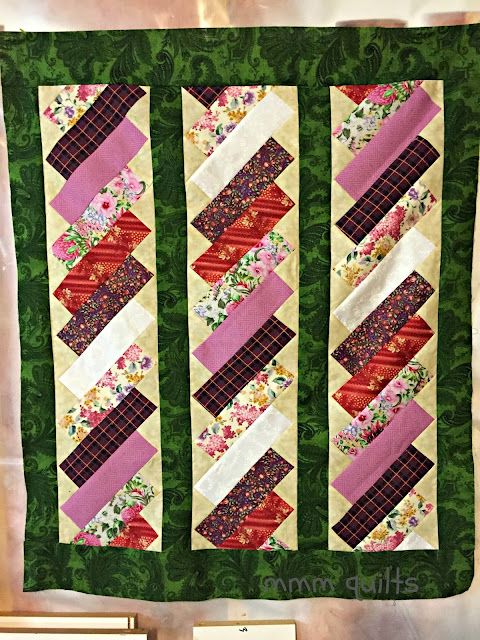 I finished this flimsy yesterday.  It was started by a guild member at our Wheelchair Quilts sewing day, and she couldn't wrap her head around the offsetting that is needed to get the rectangles on the angle, so she got very frustrated and gave up, giving me back the kit I'd cut.  I thought I'd put it together so she can see it for next week's guild meeting, as she did sew the little triangles onto each rectangle.  I've already made this pattern once, Fairy Steps, here for the guild's charity project for Christmas.  I have 3 more kits cut, hoping they'll go at the meeting...

As it's a small quilt, and went together quite quickly, I am putting it together with the half hexie quilt I made the flimsy of this week as well.  These are basically the same fabrics, with just a couple of differences. 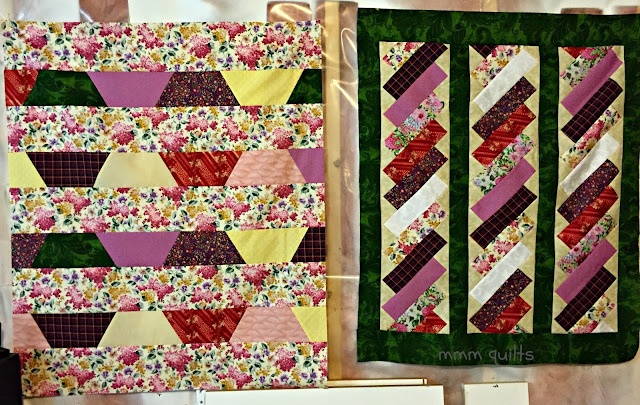 So goal #3 is to get both of these done.  They're pinned onto the vapour barrier in the basement, I know! 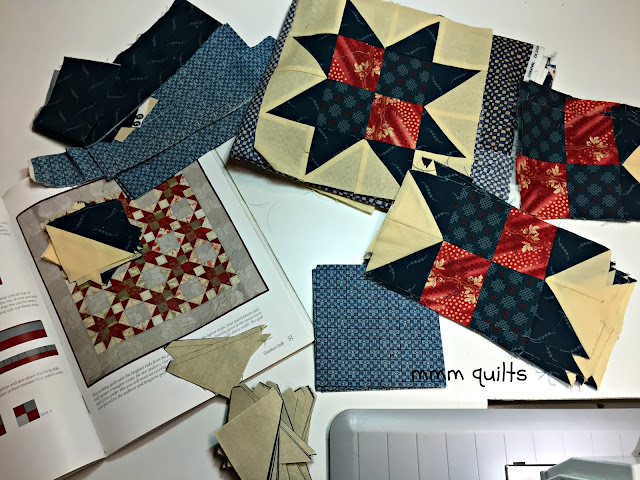 Another one from Pam & Nicky Lintott's book that I started before Fairy Steps.  This wheelchair quilt is a little more involved than I'd thought...  Yep that red is in the previous two quilts as well! 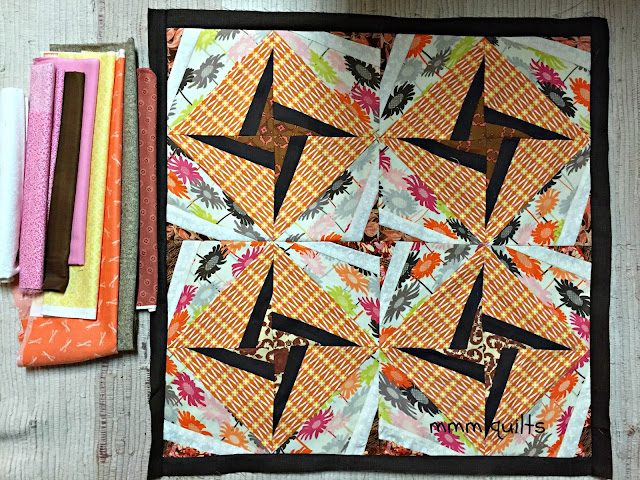 And another wheelchair quilt that is going to require a little work yet.  This one makes ten of them I've made altogether.  I've sewed on the chocolate brown frame since you last saw it, and pulled fabrics from my stash to make a wonky piano keys outer border to finish it up. These were four orphan blocks amongst the guild's charity fabric stash which I sewed together and found the second white points star in the centre.  Cool. 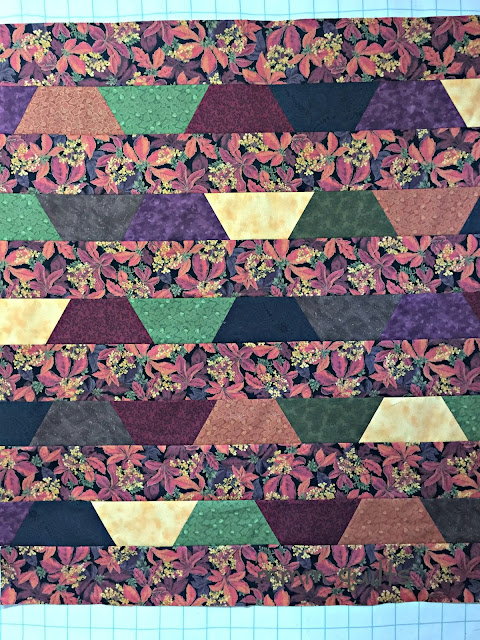 My squirrel! distraction I posted this week that I really love.  I plan to make a pieced flannel backing, as I found my flannel scraps and this Fall quilt needs a cosy backing.  I'd love to get this finished, totally do-able as I plan to do an simple FMQ design.  This is a long shot, but hopeful.

7.  Make a stocking for Brady.  I've wanted to do one for a couple of years now, and I've decided that it needs to happen.  This year.  I plan to find a stocking pattern in an older issue of American Patchwork & Quilting or off their website, All People Quilt, and make it my own, personalizing it for him.  I just have a bunch of Christmas fabric here, as I don't have the actual pattern picked out, nor designed! 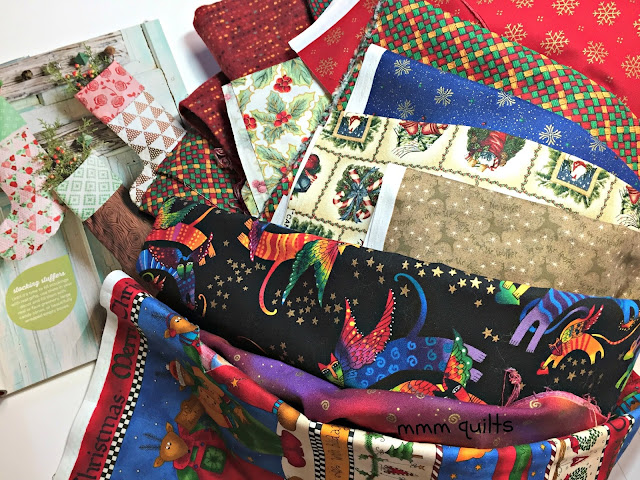 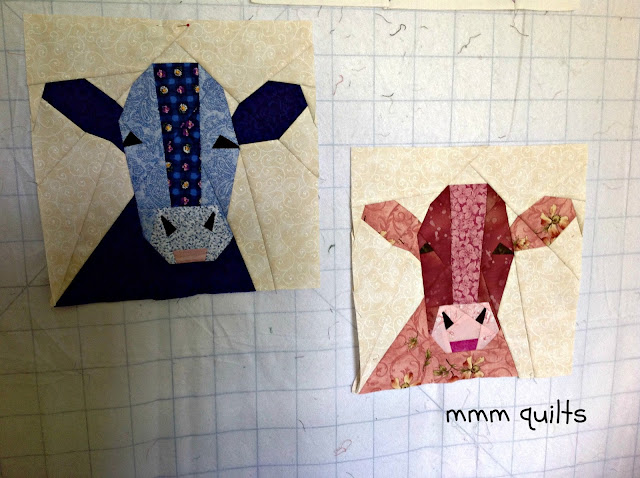 This is going to be a quilt for a dear aunt who turns 75 years young this December.  I actually have 3 cows done.  I didn't have yellow scraps with me while we were still in Florida in early Spring, pulled the yellows once we were home in April...and the cows went out to pasture, never to be seen again this year.  Each month I see Leanna's adorable creations, I think, damn! gotta get back at those.   It might not get to her on time.  Just sayin'.

So from 2.... to 8.   It's totally do-able, if I sew like I have been this past week.  Oh yeah, I hemmed two more pants for Dayna (fun) and I even made another tiny pincushion with scraps from a wheelchair quilt and John's Shamrock quilt. It's the one on the left, 4" square.  These are so cute! 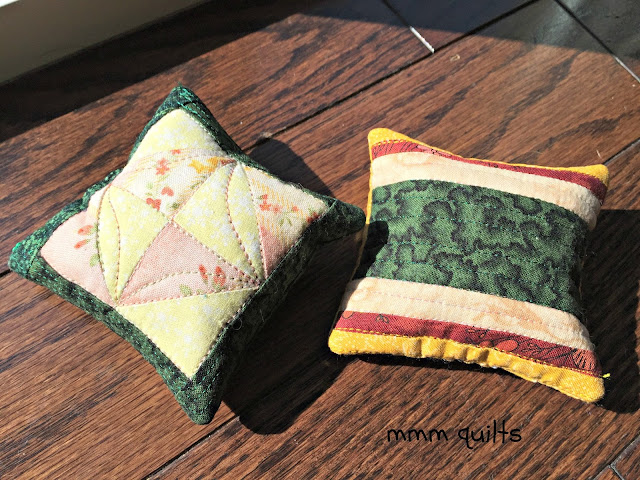 The one on the right is scraps from cutting my mystery quilt, which also has Shamrock (and Mystery) leftovers in it!  I haven't closed the opening as I still have to find a source that doesn't cost a fortune for crushed walnut shells (talk to the squirrels out back I know ha) or silica sand.  MacGyver sourced out both at Princess Auto, but in a 50-pound bag, cough.

Linking up with the lovely Adrianne in New Zealand at On The Windy Side.

Email ThisBlogThis!Share to TwitterShare to FacebookShare to Pinterest
Labels: finish along, flimsy finish