This is a (mostly) photos post.  Good luck with that, Sandra, I can hear you thinking! Here are about 10 items for which I am grateful.

I've stashed some of these photos for a while.. 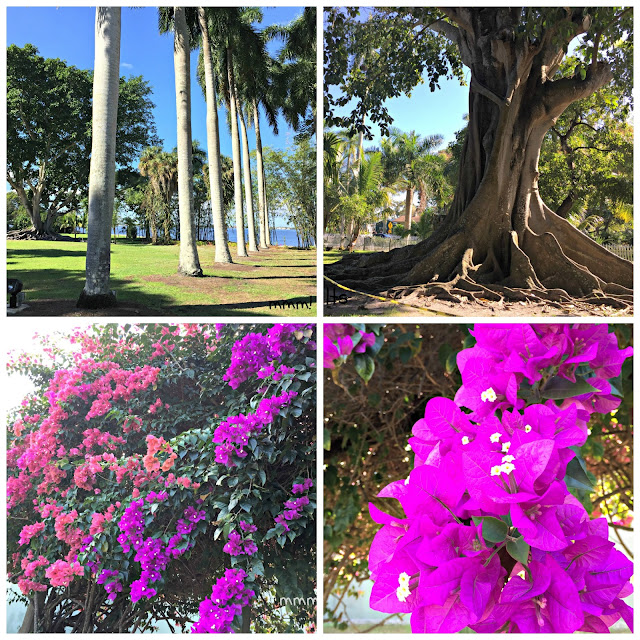 A few weeks ago we went to the Edison and Ford Winter Estates in Fort Myers.  It is a place I've wanted to visit for ages.  It did not disappoint.  Clockwise from top left: Mysore Fig Tree in the distance on the left and a stately row of palms leading to the Caloosahatchee River on Ford's estate.  Next is a closeup of another massive Mysore Fig in front of Edison's home. I wanted to do a headstand in front of Ford's tree. Too many people around but that would've been so cool! Mysore is the style of Ashtanga I practise, which originated in Mysore, India.  (yes I'M-sore LOL after some days of practice!)  Close-up of one of my all-time favourite Florida plants, Bougainvillea, and then a row of a few colours of these "paper flower" bushes on the estates. 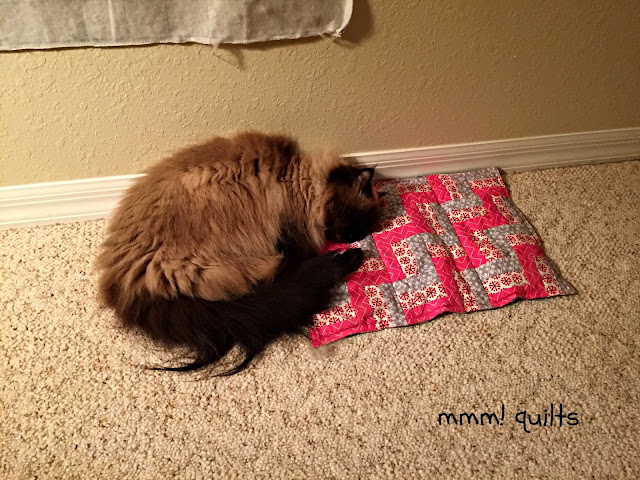 I love animals.  I love my own three fur kids; they are a part of our family, each with their own wonderful personality. I love that they often gravitate to my sewing room, clearly a place of extreme happiness, completeness, and peace.  I love that Bella, like Naala, will often lie beside her cushion, and use it to rest an elbow and head on!
We live in an area that is not built up very much, although it sure has had a housing boom over the past two winters.  As a result of the lack of houses, there is a lot of wildlife and nature.  I find turkey buzzards both hilarious and a bit creepy.  Hilarious because they are so big and perch in these dead trees, or on the neighbours' rooftop , two of them, a few days ago, much to Naala's annoyance.  She raced around the yard, deep growling in her chest and leapt into the air at them!  They, in turn, flipped her the bird, lol, by buzzing relatively low overhead, flapping (loudly! they're huge!) their wings. Nature is beautiful but also cruel: I saw a dead (looked agonizing) possum yesterday at the side of the road, mostly eaten out but head and legs and fur very much there.  Quite possibly killed or half-eaten by one of the many bobcats we see; munched on, or will be, as well by buzzards.  I love Norfolk Pine trees (not as much as those Mysore Figs) which also get humongous. I just found out they are native to Norfolk Island in the Southern Hemisphere, east of Australia, not Norfolk, VA! Orlando is their limit for how far north they can grow. Seems so odd because when I think of a pine tree, I think snow, northern climate, right?
Design #8 - Sunset on the City: I am quite amazed at how much I am enjoying fiddling around with design, especially colouring with pencil crayons! This design above, #8, was inspired by the fabric below, 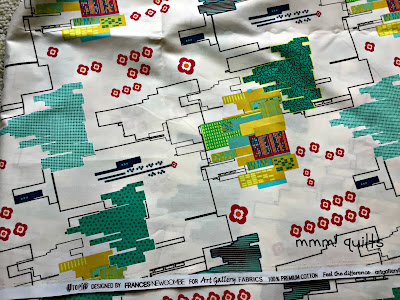 which I purchased on sale from Hawthorne Threads.  May I interject that I love sale fabric as well?! I couldn't afford to quilt without finding deals. I bought it to go on the back of my House Blocks RSC2017 quilt.  I wrote a tutorial for the block in my last post, or you can download a PDF for free right here. That is an affiliate link.😉  Finally, last photo in the collage above, I am not a fan of bugs per se, but of some, yes.  No clue what this leaf bug is that MacGyver scared out of the jasmine when he was watering, but look at the size of it! At first I thought it was a Praying Mantis. I actually saw it wipe its face on the leaves of the viburnum right after I took the photo!

Nope, I would not have bought a lot of these...lemons anyone, for example!  But seeing and petting them, possibilities are forming.


I like Tuesdays because we get three more 6" blocks!  We are now 20% done the 150 Canadian Women Project at Next Step Quilt Designs.  Here are this week's ladies:
Here are the first 30 blocks! I will be sewing sashing and cornerstones to them, but haven't got the fabric from Sew Sisters yet because it's been delivered to my friend in Ontario!
I love my country, Canada; I've made no secret of that.  It has inadvertently sneaked into this blog over the past year, unplanned, but I'm happy that it has. We celebrate 150 years as a country this July.  I feel very fortunate to be able to escape a few months of the Canadian winter and sojourn in Florida's sunshine.  I love sunshine.  I admire and deeply respect American's outgoing president and, without getting too political, because I don't have the right to express my opinion on choices for president here since I can't vote, but I do have the right to express my opinion on a fellow human being.  Let me just say this phrase: President Obama and Chelsea Manning, which makes me both smile and choke up at the same time with emotion.  So thankful.  Kudos to you, Mr. President.

I like pattern-testing.  I've learned about writing my own patterns by testing for others.  The 10" blocks I've done for Cindy over the past several months have challenged me:  to find the right fabric for the various components, to evaluate the instructions for clarity, and to apply pieces a quarter the size or less of my pinkie fingernail!  I am so thankful for Lara's Crafted Appliqué!  I've done no stitching on the four appliquéd blocks I've made and they all have held wonderfully. 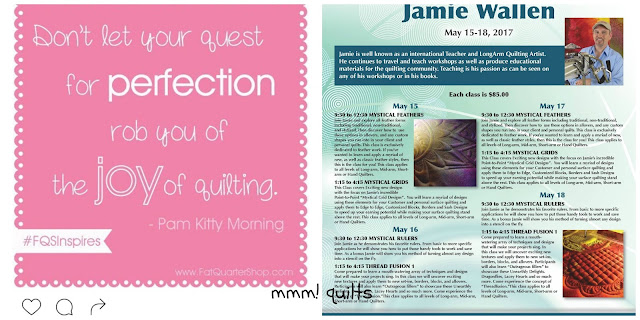 I love the saying on Instagram posted by Fat Quarter Shop.  This could apply to anything: yoga, your body, your parenting, or any hobby or activity.  I love Angela Walters, who said in this week's episode, "Finished is better than perfect" and notes on her blog that she purposely left mistakes in her videos to show that she herself is not perfect and she is totally okay with that.  "Fibre in my wine...hmmph!...meh, I'm okay with that, " and she takes another swig.  I LOVE her.  None of what you see in her videos is forced; she is truly that spontaneously funny in person.  Another great quilter whose YouTube channel I subscribe to, is Jamie Wallen and ...... DRUM ROLL .... I am going to be taking a couple of his classes when he is at The Quilt Bee in Ontario this May!!! EEEP!

Linking up
Whims and Fancies
You can hop over to Not Afraid of Color if you'd like to read LeeAnna's "I Like" Thursday post and find a few other bloggers who write similar ones.
and also with
Confessions of a Fabric Addict
Crazy Mom Quilts (no finish here, unless you count the finish of pattern testing Cindy's Canada blocks😉)