Well now THAT is a catchy title right?!

Dead People
Three more Kickass Canadian 'Nasty Women' (interjection: that's a reference to Ashely Judd's speech a few days ago which, if you didn't see it, is here).
These went together in a snap, as Kathryn of Next Step Quilt Designs promised.  I love the quote from Eleanor, "The building (Parliament Hill in Ottawa) and I were discussing things."  I can relate this to the many quilts and I who "discuss things"!! I chose a bit of a maverick fabric for her, almost in the purple family, with intricate scrollwork.

Dead Fish
Went to the beach at sunrise again yesterday.  It is a serene place with a different crowd at that time.  This time it was not serene...the SURF--!!
The girls I walked with, seasoned beachcombers for decades upon decades, hoped to discover treasure washed up by these winds and some storms that blew through.  No such luck.  Red tide had all three of us coughing and wheezing near the end of the couple of hours, and the beach was quite devoid of treasure.  Not one piece of coral was found by any of us.  However.

Sadly, there was quite the treasure trove of dead fish.  Interestingly, they didn't smell, they weren't pecked at by birds, and they were incredibly lifelike.  I think they may have succumbed to red tide which is an algal bloom that releases a toxic chemical that affects the central nervous system of fish and other vertebrates, killing them; waves break open the cells, releasing the toxins into the air which affects the respiratory system of humans.
*If you're squeamish, you may want to skip to the end.
Further along I saw this beauty: 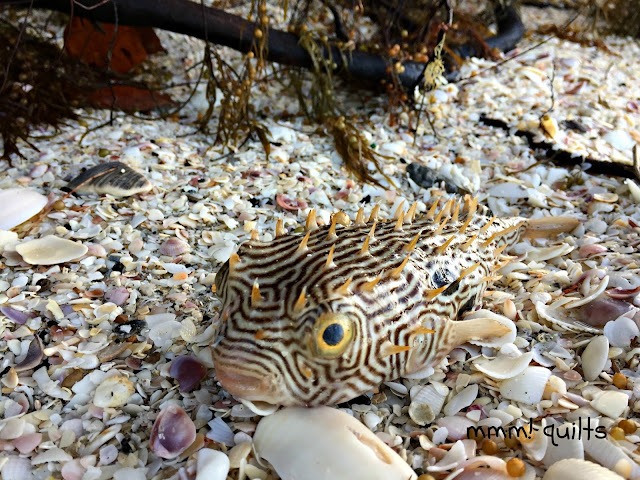 I am not a fish aficionado; I have never in my life been able to eat fish (wish I could because they're so good for you) but these specimens fascinated me.

The one below made me think of Dori!

I was intrigued by the yellow on her and the little bit of blue/violet...but upon closer inspection I realized she has a hexagon pattern on her skin!  On the right is what my friend Donna was pretty sure is a sand collar, something I had never seen nor heard of.  She was hoping to be able to preserve it. I thought it was some partially broken down plastic! It was like a soft plastic in feel and texture, similar to firm jelly.  A moment of research tells me it is a Neverita duplicata and found on the Atlantic beaches of Florida, but we were on the Gulf!  Here is a link, and here is a good old Wikipedia link where they are described as gelatinous.  I read that after I wrote 'firm jelly'. 😊

A little further on I came across another 'Dori'; it took me a few search engine phrases, but Google did finally give me the answer: I believe she is a Scrawled Cowfish.  Here is a link. 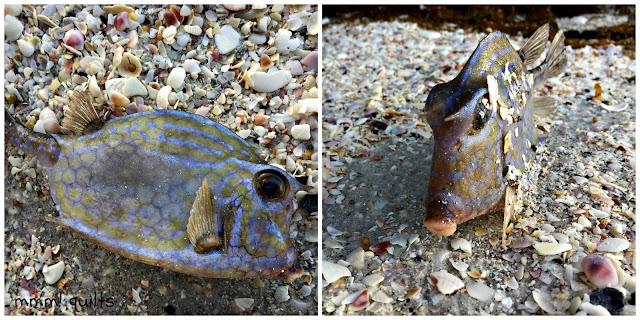 Setting all squeamishness aside, I carefully touched her.  Just rubbery.  So I stood her up to see how skinny she is.  Look at her lips! And those horns--!!

But LOOK at the side that was protected from the air... 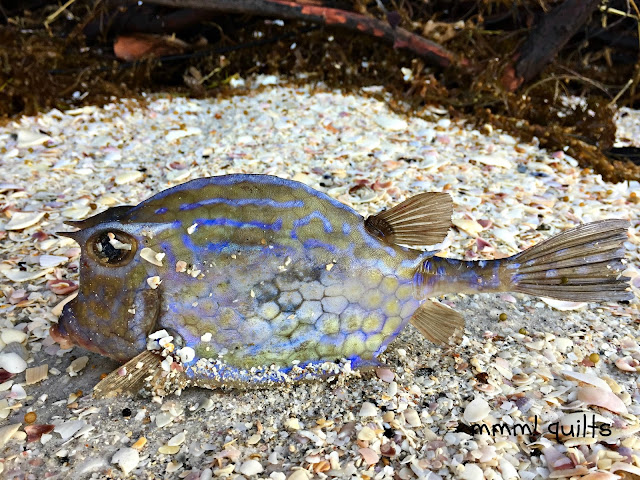 Can you begin to imagine how incredibly stunning she must be in real life in the ocean?  How I'd love to see that one day...yep on the bucket list is at the very least snorkelling, and hopefully one day scuba-diving.  The hexagons just leave me speechless.  Nature, as I said in my last post, is not always warm and fuzzy, often cruel, but always, without fail ahhh-mazing, awe-invoking. Glory of the kind I hear when a choir full-on belts out one sustained note...

I asked my friends who would clean up all the carnage. Was there a team?  They said volunteers do it.  I love feel-good moments like that.  I love quiet, good deeds. 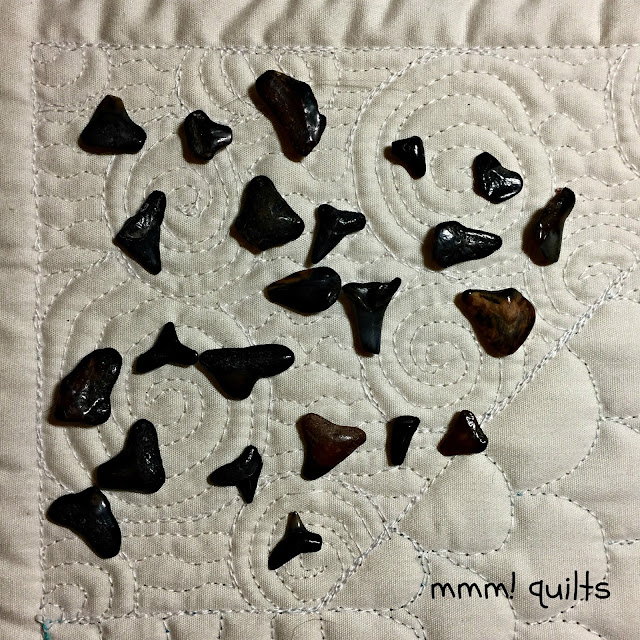 Here is my treasure. Besides the photos I took, I came home with several fossilized shark teeth to add to my growing collection.  They are resting on the back of a new quilted cushion cover.  I've turned the free House Block tutorial block into one that will go in my new sewing room!  There have been almost 250 downloads in one week since I uploaded it. 😃 Stay tuned for the reveal.

Have you ever had a quilt idea or an image grab you like this and you drop everything you are supposed to be stitching and hone in on the one project?  We often refer to these eye candy projects, shiny baubles, as 'squirrels' because, like the dog who hones in on that squirrel, we get tunnel vision and refuse to be dissuaded by anything else.  Well Saturday is the launch of my new linky party for people like you and myself... 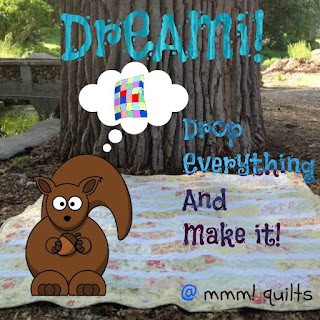 If you've already had a DrEAMi! in January, no need to write up a new post.  In order to link up, your DrEAMi! does not have to be a finished project.  Yikes, as well as enabling you to get sidetracked, I now appear to be enabling you to create more UFOs...  Well, I do know there are four Quarter Finish Alongs throughout the year that you can join to get guilted motivated into finishing DrEAMi! and UFO or WIP projects.  I also happen to know that a good friend of mine, who helped me create the squirrel DrEAMi! button, Tish, is cooking up another idea for helping get the UFOs into finished quilts!  Hope you grab my button (I've set it up to open in a new page, just so you know) and join me this coming Saturday!

Linking up
Sew Fresh Quilts  If you are scarred by all the dead, (but bright!) things, head over to Lorna's blog to see fun brightly-coloured reindeer!
Posted by Sandra Walker at 5:14 PM