Sneaking in another finish that was on my Q1FAL List. This cushion cover is made from leftover HSTs from my Postcard from Sweden quilt. Cool: that finish post is April 20, almost exactly a year ago! I've had this top pieced for a couple months... 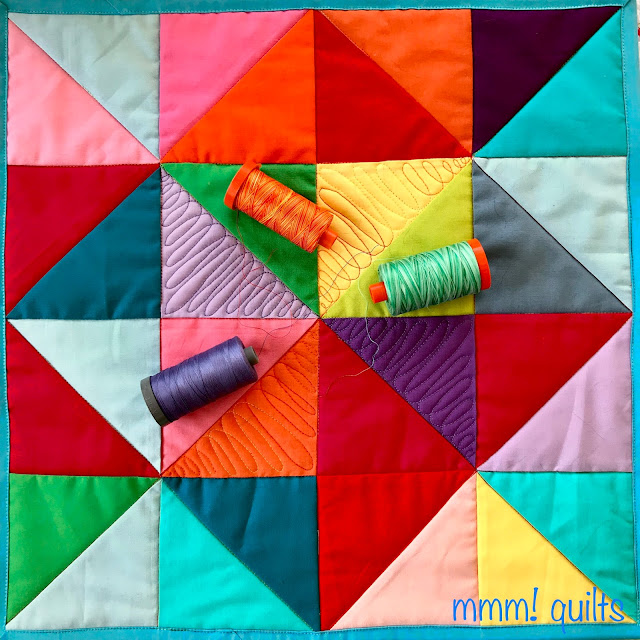 I kept the quilting simple, first just doing SITD with my walking foot. I used the same orange variegated thread I'd used on the quilt. 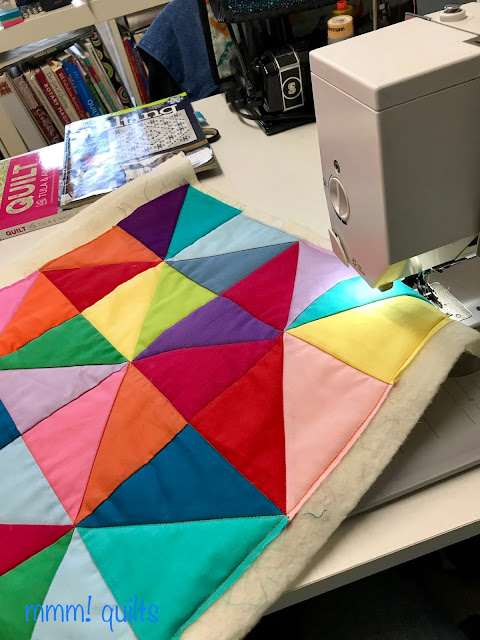 Last night, at exactly this moment in quilting the cushion cover, I received a text from Dayna's sister-in-law, Casey. Casey loved the quilt from the beginning through all the QAL stages last spring, often commenting on my Insta posts. She was an incredible support to Dayna through the wedding planning process, even flew from her home in Nashville up to Detroit for Dayna's bachelorette, for which she did most of the planning. She organized an incredibly thoughtful gift of a book of photos with accompanying notes, well wishes, advice and memories from Dayna's closest friends and family.

She it was also, who, with Tyler, flew Dayna and I to Nashville in February 2018 to shop for a wedding dress. She and Dayna have been close all along, and I wanted to thank Casey in an extra-special way for all she did and how much it meant to me that she cares so much for Dayna. In December, shortly after the wedding, it came to me that this quilt, which Casey so loved, needed to go live with her. 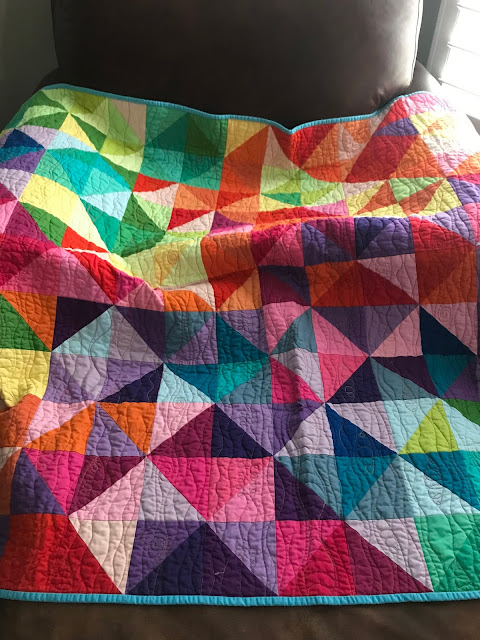 This was what she sent me, with a few GIFs of happiness and squealing. She'd just received it yesterday. Why nearly four months after I'd had the original thought? Well... Casey was coming up here for Christmas, but it didn't happen, due to her kids being sick. Then Dayna and Tyler went down there in February, so they were taking it along with their presents, except they forgot to take not only the quilt for Casey, but their presents!! Dayna finally mailed it off for me last week.

Back to the cushion/pillow cover: 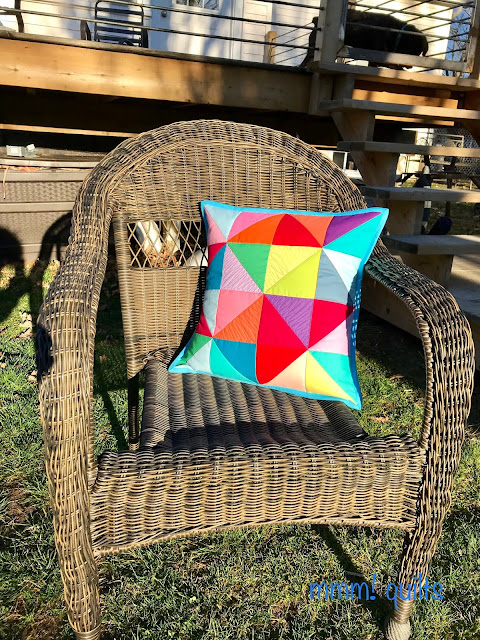 Took a couple of shots in the morning sunshine. Rufus-bombed photo as per usual...

I did not pay attention at all to where I placed the squares. I actually did not overthink this one at all. There are even two reds, though different, touching, and an orange there too... 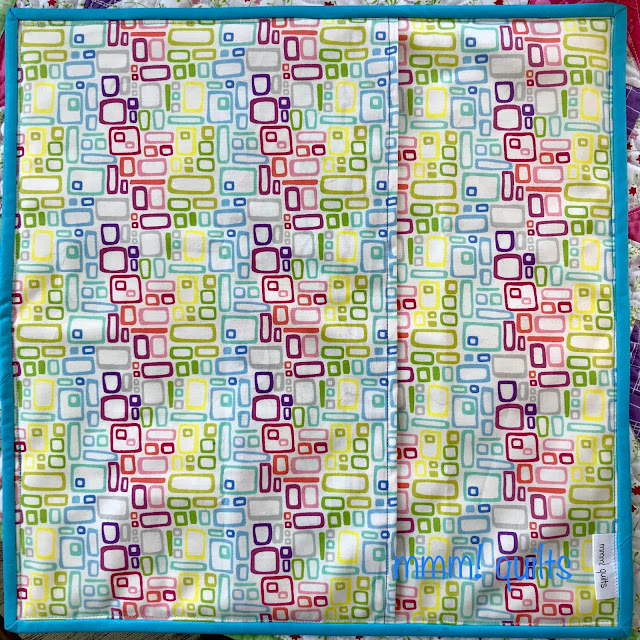 When Bernie of Needle & Foot sent me the kit I curated for the Beothuk Star QAL, (another post coming tomorrow), I had to add a couple of items to the package; I mean A. it would be rude not to, as my good friend Helen says, and B. stuff as much into that flat-rate envelope as you can, right? I saw this fabric in Bernie's shop, and knew it would make a great binding for an RSC quilt. Then, when I was thinking about a cushion back, I spotted it, and bingo! Perfect!  I can see much more of it this way than just as a binding -- bonus!

I like the envelope-style cushion back, and I always bind my pillows. Cushions. Whatever. All good. It just gives them a crisp finish. I used the same binding as I did on the original quilt. Love that robin's egg blue! It's a wonderful solid from Paintbrush Studio, and one I used in my In the Shadow of the Plus quilt that was in the September issue of Modern Patchwork last year. I stitched it down with the variegated aqua thread. 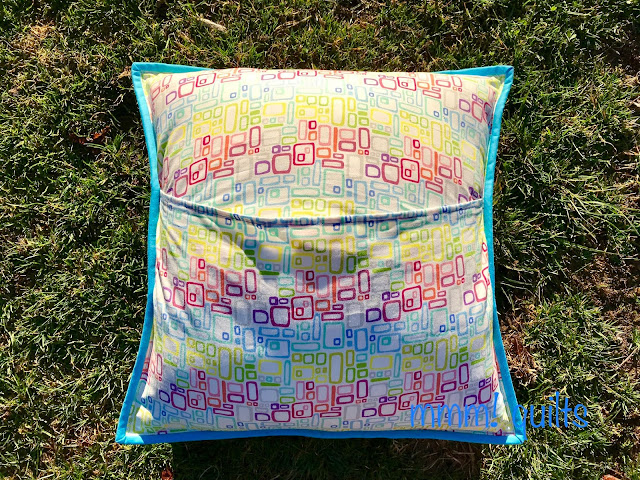 It's a fairly poofy cushion form inside, yet there's enough overlap that you don't see the form. Tip for figuring out how big to cut the two halves of the back: I usually find the centre of the top, so this was 8.25" and then add about 3.5" to that and cut two pieces that measurement, so in this case, 16.5 X 11.75", meh, make it an even 12".  A little extra, like dessert, can't hurt!

I used three Aurifil threads I've purchased for the quilting. I'm really liking their 28 ct. It's kind of cool how, when it's on the pillow form, you get a circular shape! 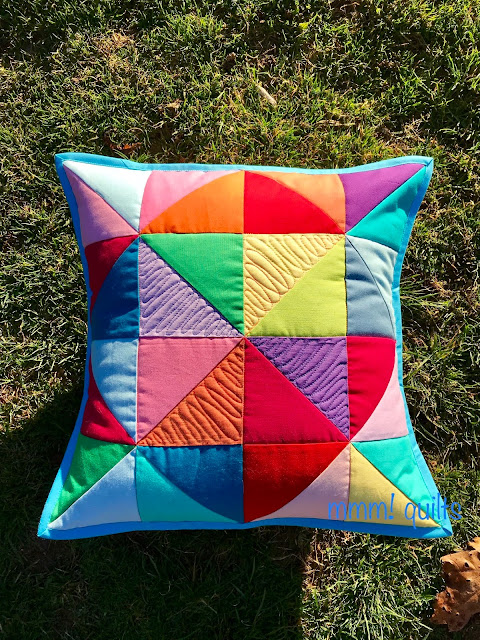 Linking up
Dizzy Quilts for the Q1 FAL
Quilt Fabrication
Sew Fresh Quilts
My Quilt Infatuation
TGIFF at Slice of Pi Quilts
Confessions of a Fabric Addict
Busy Hands Quilts
The Madd Quilter
Posted by Sandra Walker at 9:38 AM