Beothuk Star QAL: Second Set of Blocks and a Flimsy

It never gets old seeing a quilt I designed on paper and/or in EQ come to life in fabric. And then... when others make my designs in their own fabrics, and with their own spin on the design, I get even more excited than Rufus with his big yellow ball.

I hope the first eight blocks went together like a breeze; a reward is needed after all those HSTs... (ha! I'm a poet and I didn't even know it!) This week we are making the second set of eight and then sewing them together, adding the border and we will have our flimsy! 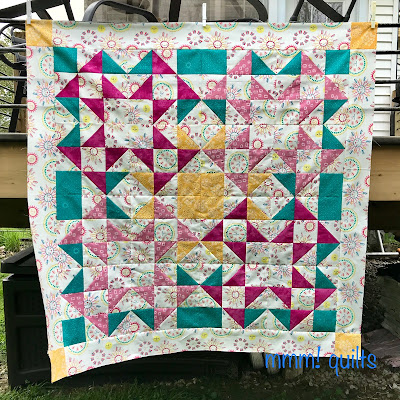 The second  set goes together exactly like the first, seams oriented in the same directions so they will nest for those crisp points we like. Again, I will start with the version I'm making, which is the new kit, still available at Needle & Foot Fine Fabrics.

Version 4
Make the second set of six blocks.
Two stars are in one colour, and two stars are in another colour. I am working with the dark pink this week, but for the seams directions, I will use the light pink fabric photo. 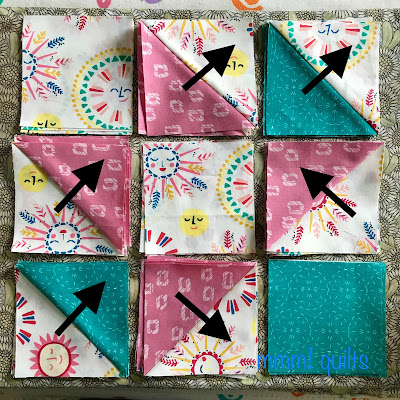 Once again I stacked six of each patch like this so I could 'mindlessly' sew them together in rows!

Once you have each row of the block sewn together press the first and third row seams out and the centre row in as shown in the photo below: 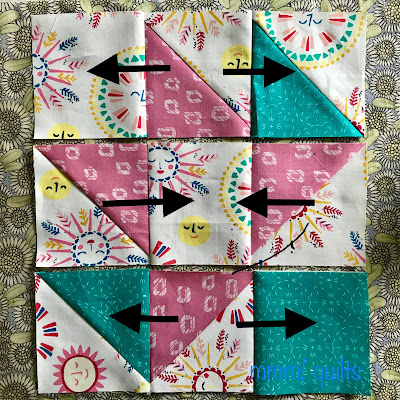 Stitch. Press the two horizontal seams you just sewed away from the block centre in three of the blocks and press the seams toward the centre in the other three. The block should measure 9.5". 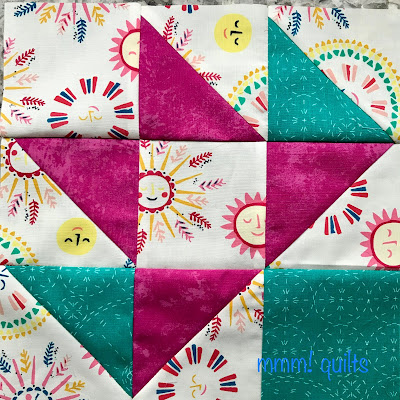 In the same way, make two more dark pink star blocks but with the star that pops fabric. Mine is yellow. Follow the diagrams above for which way the seams should go. 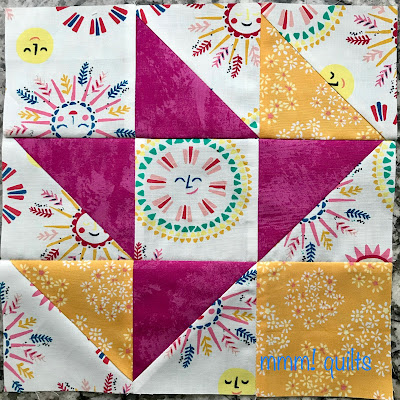 You now have 16 blocks in total.

Version 1 - Original Quilt
All four stars in each of the four quadrants are the same fabric. 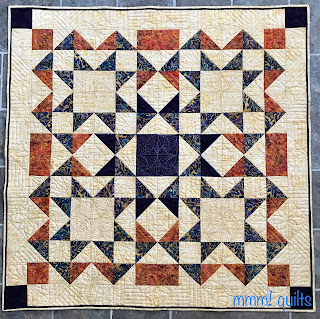 Make the two blocks for the centre star that pops.
Make two blocks as per Version 4, using navy mottled (or your colour) HSTs, BG patches and eggplant patches as well as HSTs where I used turquoise.

Version 2 - Original Blogger Bundle
The four stars in the four quadrants are made of just three fabrics. 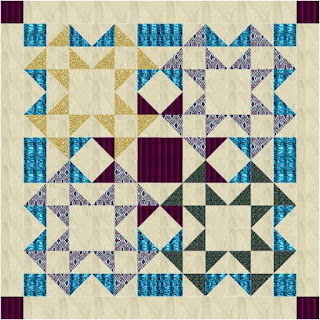 Make the second set of six blocks.
If you did as I suggested, and made the two made with the purple and teal diamond fabric, you'll now make the one with the green and the other with the yellow fabric as well as the turquoise. Follow Version 4. You will make three green, putting the turquoise where my turquoise is, and three yellow with turquoise blocks.
Make the two blocks for the centre star that pops.
You will make one green and one yellow fabric blocks for the centre star that pops, substituting eggplant where I used yellow.


**Tricky one: if using the fat quarter bundle, if you've decided you are doing the 'cross' effect, then 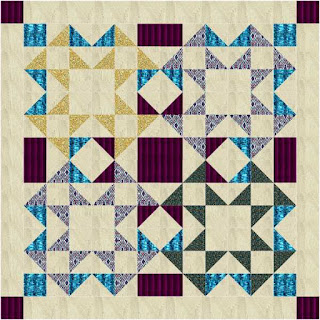 you only have four 3.5" turquoise squares, so substitute the eggplant 3.5" patches as follows:

If you've decided to make the double eggplant cornerstones: 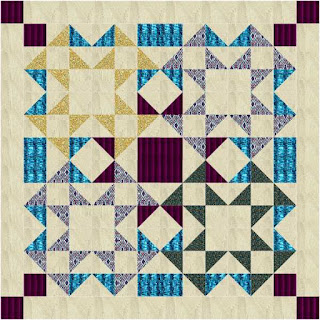 If this is your version, you only have eight 3.5" turquoise squares, so use the turquoise patches and turquoise HSTs in two of the green and two of the yellow blocks you make.


Use the eggplant 3.5" patch in one of the green and one of the yellow blocks. 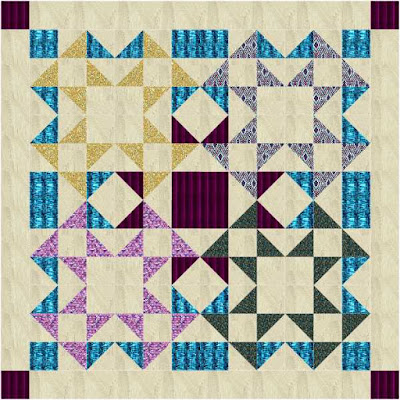 Last week we made the pink blocks and the diamond fabric blocks. Therefore follow the method for Version 2 Original Blogger Bundle to make the three green and three yellow blocks with turquoise fabric.

For the two blocks for the centre star that pops, use the eggplant HSTs and the eggplant 3.5" patches where I used yellow. You will make one block using the green fabric and eggplant and one using the yellow with the eggplant.

Piece the Flimsy
Lay out your quilt on your design wall according to the version you are doing. Be sure to orient the blocks to form the four corner stars with the 'pop' star in the centre. 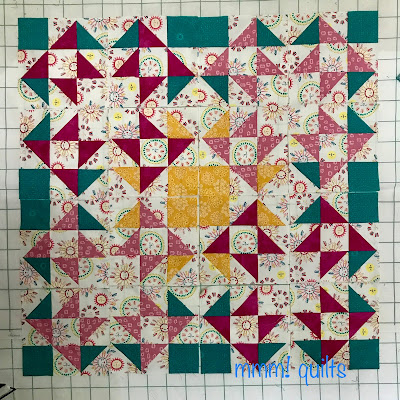 Sew the 16 blocks together in rows or columns, whichever you prefer. Press. 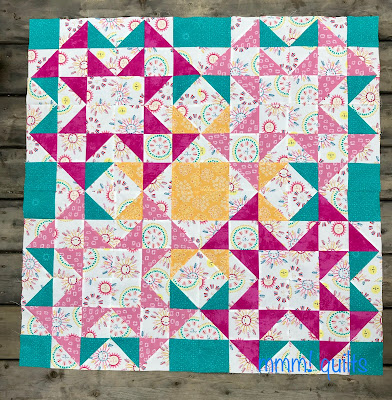 Borders
Measure your quilt through the centre horizontally and vertically. Ideally it will be square, and ideally it will be 36.5". Cut your four borders to your quilt's dimensions. Gather the four 3.5" squares that remain. In my case they are yellow. In the Blogger Bundle they are eggplant.


Mark the centre of two of the two border strips. Align that mark with the centre of one side of your quilt. Pin. Stitch. Repeat with the opposite side. Press to the border fabric.

Sew one yellow cornerstone to each end of two of the borders strips. Press to the border fabric. Sew these to the top and bottom of your quilt as you did the sides. Press, step back and admire your finished flimsy! Rufus likes it! (Who am I kidding? He wanted one of the clothespegs.)

While I was making the flimsy and putting the borders on today, and starting to compose this post... 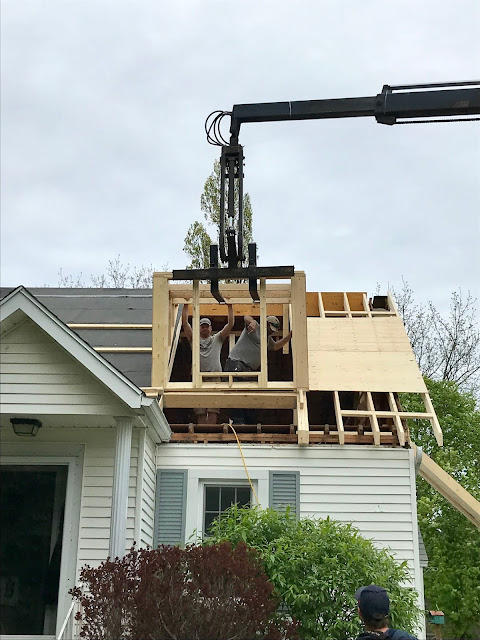 the two thirds that were left of our roof got torn off and new rafters and dormers got installed! The guy you see in the lower right moves this crane all with a video game-type console! And no, none of the three guys in the photo is MacGyver. We don't have the peak on the dormers yet, but they're tarped over which will hopefully keep out the rain that's predicted for tomorrow. It's going to be soooo good!

Note
that I've extended the linky for your first eight blocks or all sixteen, to Thursday midnight, just to give a little more time for anyone who may need it. The prize will be a copy of the July/August McCalls' Quilting magazine that I am in! I will announce the winner in my Friday or Saturday post.

So! You now have until June 15 to finish your quilt! The linky party will open on that day and will remain open for a full week. Note that a finished flimsy OR a finished quilt will both count for the prize draws. I cannot wait to see these come together. What I have seen this past week (and I'll admit I haven't visited everyone yet who linked up) is just gorgeous! Thank you so much for quilting along!

Linking up
Sew Fresh Quilts
Posted by Sandra Walker at 6:00 AM