I've had both plus-sized and petite-sized squirrels in my life this past week. It was not planned, no. What were the plans? To get started on my May challenge for Island Batik, which is Make it Modern with Hobbs Batting. I have my fabrics chosen, the batting as well. Not totally sure on my design, which will be another from the 30 Quilt Designs Challenge that is still going on, and yeah, you can still join! Drop me an email or PM on IG. We are a lovely little group, and we have decided two things: 1. that we are going to extend the deadline to May 25, so back to the two years previously where it was 30 quilt designs within 70 days, and 2. that we will keep our group going, as it's been generating some good discussions and designs. 😊

So I've been DrEAMi-ing big time most of this week, dropping the regularly scheduled programming (don't tell IB) in favour of some squirrels that have got me running after them. Can a DrEAMi last more than one sitting? You betcha. Does it have to end in a finished product? Well eventually, and the quintessential DrEAMi usually does not let you go until you've made it in its entirety, quilt top or the best: a quilt (or painting as my friend Helen of Word Weaver Art did) finish! However, if you've done like I did, and thrown caution, well, that and your supposed-to-be-working-on project to the winds in favour of just having to make this... 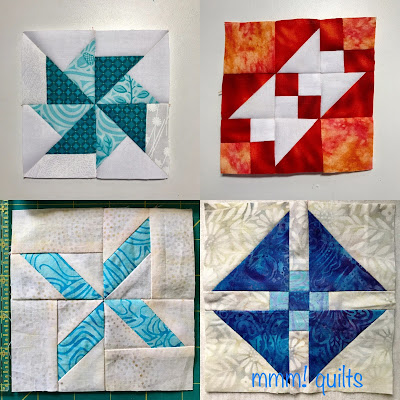 then it's a DrEAMi!


It started with the turquoise pinwheel, which I saw somewhere on someone's blog (an RSC person's for sure) and off I went to Mari's blog to check out the tutorial. Well, a couple of those turquoise scraps were lying right there beside me, from my recent finish, Autumn Winds (go check it out; there's a Giveaway for two prizes; I'll wait here). So I made that block in nothing flat, since I'd had my whites plastic drawer beside me to make the Hearts for New Zealand, something I've meant to do for over a month now, and yep they're on their way but I did take a photo: 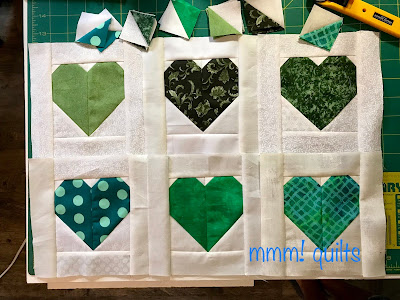 I love them! There are two old, no vintage fabrics, the top left olive green, and the middle bottom kelly green, along with some newer ones like the polka dots and the grid ones, and then some really new, that are in a quilt for an upcoming magazine, which I am dying to share, but I have to wait until the end of June, and those two are top row, first and second. All the little HSTs that got cut off to make the bottom of the heart I sewed back together and they will be most likely joining the others from my arrows blocks for RSC, which is my main (and I thought only, ha, yeah) RSC project this year.

Back to the squirrels. Once I made the pinwheel, I was smitten. These are 4.5" finished blocks, so cute, and smaller than the Tula Pink City Sampler 6" ones I made last summer. So this is an ongoing project, like my Canadian Women, that I will thoroughly enjoy, even though 1/3 of the blocks are out! I just had to make the orange one for this month, and then started going back in time to find the others. So now I have 4/14(?) done, and I figure with 3-4 or more per week, (it's a squirrel; I could make them all this weekend, watch out) I'll be caught up in no time. There were cut-offs from the pinwheel which, crazy me, decided to sew back together and make two 1.25" finished blocks! 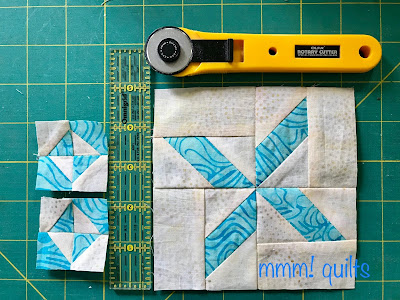 This block and the Churn Dash variation are done in Island Batik fabrics, ahh I love them, and for teeny piecing they are so crisp and do not fray.

The second squirrel I chased without stopping to come up for air, is a QAL I have found myself now a part of. I actually have joined two this past week, like WHAT is with me? I'm behind in my own QAL for crying out loud. Well, I'm up to speed with the HSTs, but I should be working on the next step which will be released May 15.

This is the Sweet Star QAL hosted by Jessica Dayon. Do not ask because I could not begin to tell you, how I found this squirrel, but it's another, like so many, that tend to live down a rabbit hole... Am I glad I chased this big fat one! 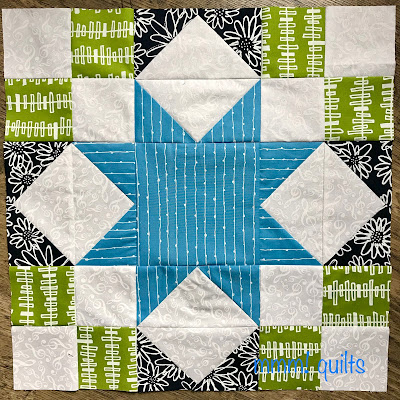 That was my first block. I am finally using this FQ stack I got from Craftsy (before they became bluprint - affiliate link) of Blueberry Park by Karen Lewis. This FQ stack was made for me, greens and blues, my favourite colour combination, and I just knew this quilt would be fantastic in it. With moving my sewing room into the basement bedroom and our former bedroom, yes, two places, which is driving me crazy, but all will be good one day, I came across a few, all right a lot, of fabric that needs to grow up. Like a few of my friends have mentioned, the white is a little weird. It's soft, but it's painted on, as are the treble clefs in the white, so it has the same feel. I'm fine with it outside of ironing it feels weird.

Okay, being the mmm!-nabler that Rose says I am, you will love this QAL. There is a downloadable PDF, and the pace is decent, make four blocks a week, AND, best of all, the blocks are 18" finished, so you will get a big quilt! Another bonus is you can just make four blocks and have yourself a sweet little baby quilt in no time. I'm going for the big one, sixteen blocks. Are you tempted? I can feel you are... 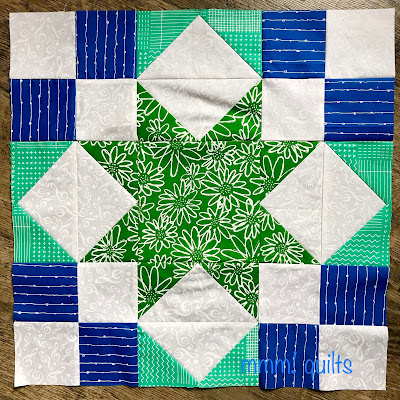 That was my second block. I made it my way. (cue the song, hope you don't get an earworm...) Jessica does her flying geese with the stitch and flip method, which resulted in lots of triangles of a decent size. You know by now that bugs me, and I sew them back together, well, usually not as tiny as the ones from Tiny Tuesday, but it was for TT, so I had to. 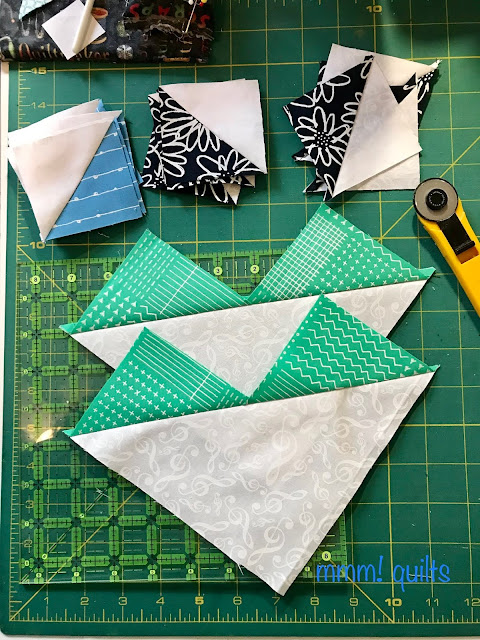 There are the HSTs, 16 of them, destined for a pencil case methinks. They are 2.25" finished, so they will make a substantial little flimsy. Well, I knew I could make the four flying geese of two colours each required with the No Waste method, so I did for the second, third and fourth blocks. 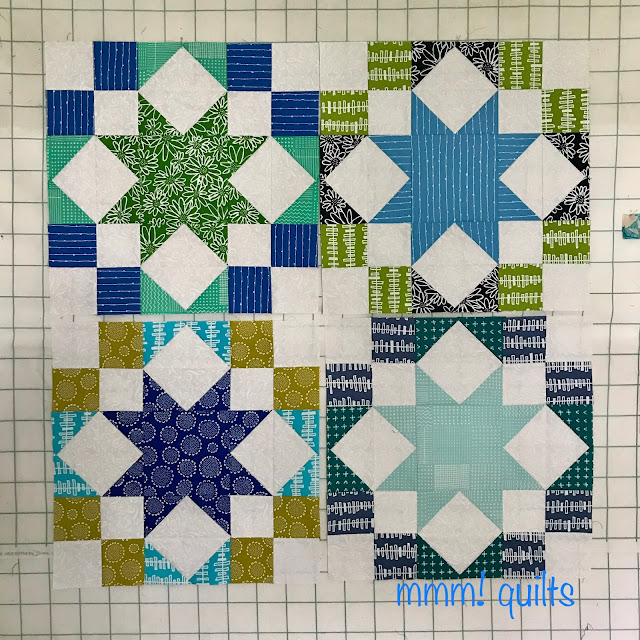 This week's homework is complete! (Okay wait a minute... I went to Jessica's home page just now to get her link, and today is Week 3 but it says Week 2 in the body of the post... so I guess I am behind after all according to her schedule, drat! I may have to force myself to make four more blocks today...)  I'm alternating between blue centre stars and green ones, lights and darks. Pretty!

With working on one of my two OMGs this week as well, the cushion cover, which is being done with this block, and shall remain secret for now, I have come up with yet another method to make this block that has four less seams.  Sixteen blocks times four equals 64 less seams; I'm all over that.

I'll be linking up with my own party on the last Saturday of the month! If you had a similar squirrel-chasing moment (or two), I hope you'll join us. 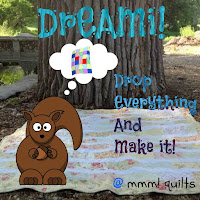