First of all in case you haven't checked the Autumn Winds post where the widget has the winners displayed, I am happy to announce that Susan S. won the bundle of eight fat quarters of Thankful by Amanda Murphy, and Dawn K. won a copy of my pattern, Blue Skies and Sunny Days, which is still on sale for half price, at $4.50CA, and I'll leave it there for a couple more days. Here it is again, in Thankful and in the original two colourways. 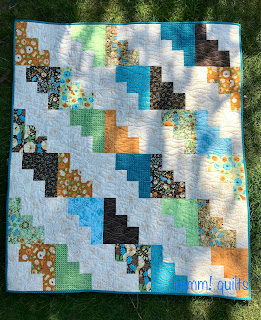 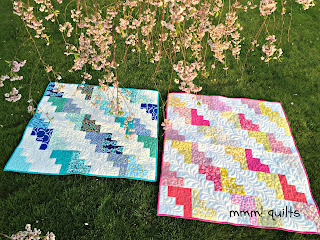 Thanks to those who did purchase a copy; each sale pays for one month of linky parties, no lie! Both sizes are included within the pattern. The Autumn Winds one is the bigger one. Speaking of the purchasing patterns department, there may be some notifications of a couple I've bought this past week, so feel free to leave now if you don't want any temptation because I'm about to throw a couple more squirrels your way!
My first H2H quilt was finished in record time. 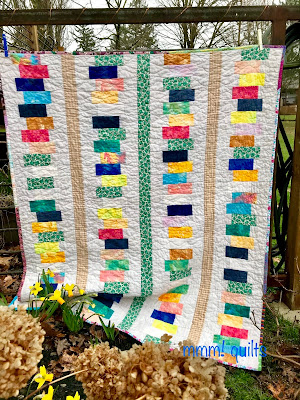 My second was a decision to give the top for the log cabin challenge to Victoria's Quilts. It has stalled in the mailing due to the fact that it is not the 55X70" required size, but 55X64" and so she's asking if another branch can use it. Since it's been a week, I'm just thinking add 3" to the top and bottom and send it off! Otherwise I'm going to quilt it because each time I look at it I want to keep it... 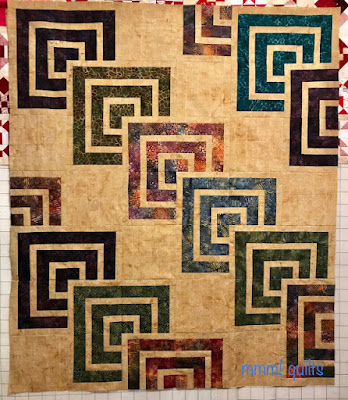 My third H2H quilt I've had planned right from the beginning too, but the original plan has been thrown out in favour of a squirrel... I'm still using the same fabrics but look what I'm making!! So excited. Love the pirate fabric, leftover from Brady's pj shorts I made him last summer. A few other scraps from the same friend who was de-stashing along with other boy-themed scraps and white scraps. The grey is Andover's Dimples that I'd bought some yardage of maybe two years ago. This is a boy-themed quilt. 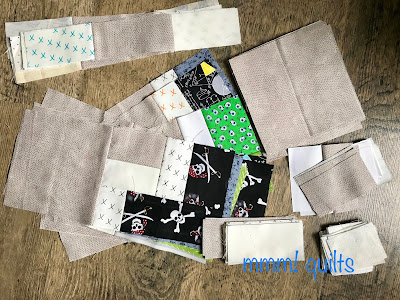 All those parts!! I originally was just going to do a 2-patch rail fence design, patterned fabric and plain. But then, Allison of Cluck Cluck Sew released a whole bunch of pretty new patterns last week. Do you remember 'May is for Maker' from a couple of years ago? A blogger started this, that we should support small designers by buying a pattern from them during the month of May. So apparently I'm having my own May is for Maker this year lol! The day this one came out I hustled right over to her shop and snagged my twitching hands a copy. I love plus quilts, as we all know, and this one satisfies the craving to make another. 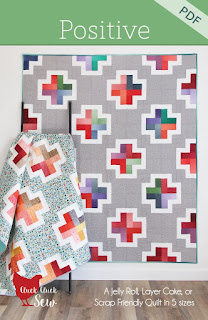 Isn't it great? And yeah, I also own Cheryl's (Meadow Mist Designs) Outlined Plus which is a bit similar, and which I also bought a couple of years ago, but have yet to make. I dunno, I just 'saw' these fabrics for the H2H quilt in this quilt, bam! So I dropped Beothuk Star, dropped Island Batik, even ignored my teensie weensie RSC Tiny Tuesday blocks to get started on Positive. Um, it's a lot more cutting than the rail fence quilt would've been. I questioned my decision over the weekend, as the deadline looms in two days... But I'm making the crib size which is a healthy 48X66" or something, so I think I can, I think I can. You readers in the Beothuk Star QAL don't care if you have another week to make those pesky I mean pretty HSTs right?!


Kidding. The next step will be out as promised on Wednesday. Meanwhile I'm getting that giddy feeling here again and it's not because I made one more block, block 5 of the Sweet Star QAL I now find myself in.

So that's one of two patterns I purchased. The other is Butterfly Patch from Lella Boutique. It's on sale the entire month of May, just so you know...AND there's a QAL to go with it.... 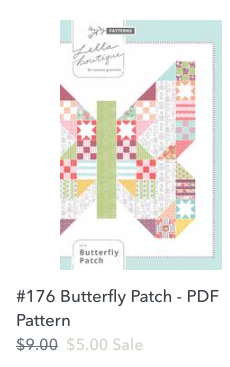 This one is due to Tracie of Riceford Streams on Instagram. Never mind that I already have a butterfly quilt pattern, not just the pattern but also the entire kit to make Tula Pink's butterfly quilt, which hasn't even been started, but petted, don't worry. Nope. I had to have this one, and I do have a plan for it, and it makes me a bit giddy and it's not even on the design wall yet!

So after taking a bit of a break from being the Grand Poobah of Squirrel Chasers, I do believe I am back in spades this month. And.  I haven't even told you of the other QAL I joined.... Once I get a new printer black cartridge so I can print this month's blocks and make them, I may confess. Just don't tell Island Batik, and don't tell my Q2FAL list and don't tell the Beothuk Star peeps.

But do tell anyone you meet in QBL about the Design Challenge that has been extended to May 25! 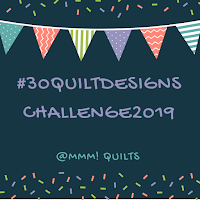 It is so very exciting, rewarding, and gratifying, to be a part of this group of talented quilters. I am so excited to see yet another design that originated within our group come to life! You can read all about it on Kathleen's blog, Kathleen McMusing tomorrow! My May Island Batik challenge is most likely going to be another of my designs from this year's challenge, and I do believe Leanne of Devoted Quilter may be making one of hers for this month as well! She also has a design in the newest issue of Make Modern. Have you got yours yet? It's a great issue, but then they all are. They are also one of my sponsors for the Beothuk Star QAL!

One last pic, my sewing room now completely gutted to the rafters. We just got word today that they will be starting the dormers on Wednesday at sun-up! 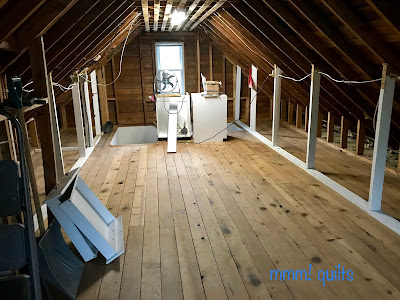 Linking up
Cooking Up Quilts

Posted by Sandra Walker at 7:51 PM