I am happy to report that just past the mid-way mark of the month I had one of my two OMGs finished. This is a cushion, or as Dayna calls it, a pillow cover. It was supposed to be a Christmas present, but it got pushed out of the way, forgotten, remembered, no time, forgotten...and now DONE! 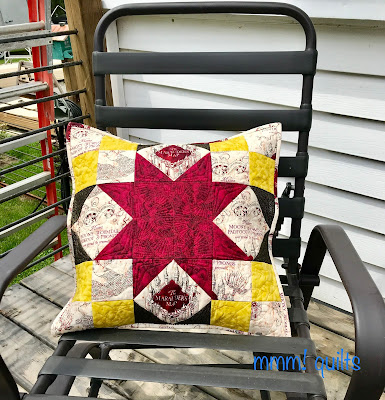 I picked up this fabric at JoAnn's to make Dayna a pillow cover at the same time as I picked up the Slytherin fabric for Brady's and Game of Thrones fabric for Brianne's. I got theirs done in record time since I was flying out there in a couple of days for Christmas. I meant to do Dayna's, but the suitcase quilt, and a Mexico trip got in the way... And then I forgot about it because I'd put the fabric in a cupboard, then remembered, then forgot...sigh. When I was packing up my sewing stuff for the renovations, I found it, and was stabbed with guilt, so I kept it out, and made it my OMG.
And it is happily done and given to her. She loves it!

I need to note that Dayna is the first one in our family, and probably the second in her entire school of K-9, to read the first Harry Potter book, Harry Potter and the Philosopher's Stone, back in 1999. Her best friend's granny lived in Scotland, and she either sent Julia or Julia was there and brought back, a copy of the first Harry Potter book. Dayna was obsessed, still is, has read each one at least 20 times, no lie. One day before I left for teaching, (I was part-time and some days I went in after the girls had left on the bus), she'd forgotten the book on the kitchen counter. I had some time to spare before I had to leave, and so I picked up this 'Harry Potter' (eye roll, 'Like who would name a book and the protagonist such a boring name as that, I thought') and I started to read it.

Ten minutes later I was still standing, mesmerized, reading, and then realized the time! As each book was released, I'd buy it and the three of us, Dayna, Brianne and me, would take turns reading a chapter... Some, no names mentioned, Dayna, would read more than her allotted chapter! Once the girls got a bit older and were working, they said they heck with this system, and bought their own copies, which, true to Dayna being an aficionado, she'd read late into the night, reading the last couple, I believe, in one sitting the day/night they were released in Canada.

She told me she used to, at age 10-12, when she was reading the first few, that she hoped against hope for an owl to arrive at our door, summoning her to Hogwarts. I remember being that enchanted as a kid too, books like Enid Blyton's The Faraway Tree, being one I wished I could suddenly find myself into. As an adult, Charles de Lint's books that take place in Newford, often in Tamson House, pulled me in, and I found myself thinking that the forest surrounding our Alberta house might very well hide the fey folk if I could catch a glimpse of them from the corner or side view of my eye... I love that sense of wonder, of enchantment, of possibility.

Dayna is a Gryffindor through and through. The Gryffindor colours are red and gold, hence the red star, a vintage fabric in my stash which was used in a 3D cube quilt class I took several years ago with my guild. The gold is also from stash, as is the black with the gold flecks. There is black in the Marauder's Map fabric, and well, one can never go wrong with a bit of black.

The block is... Jessica Dayon's Sweet Star QAL block! It suddenly hit me one day last week, that it would work perfectly, being an 18" block. And, like black, one can never go wrong with stars. 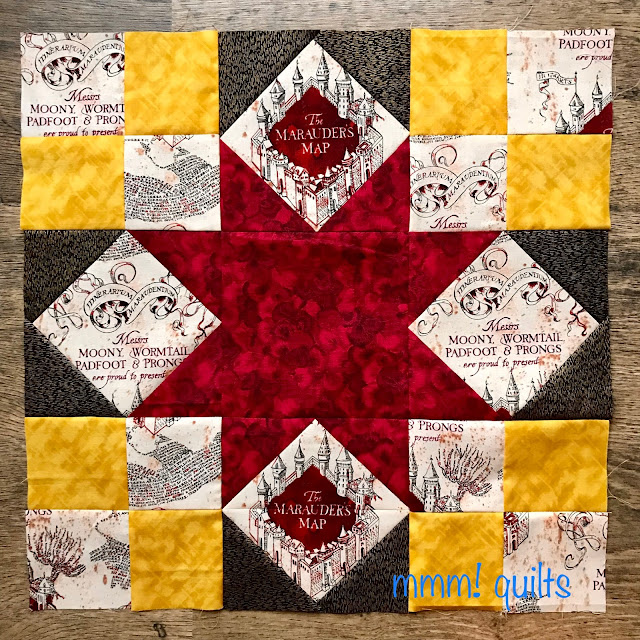 Isn't that red divine? It's kind of a feathers print that I bought at Quilter's Dream in south Edmonton, which is where most of the fabric for the 3D cube was purchased. (That quilt needs to be on TBT methinks.) I have long been a selvages nerd, so I have all the fabric info below in the Quilt Stats.

I fussy cut the images from the fabric, the Whomping Willow being one, the Moony etc names being another, and the Latin text, which means Travelling Marauders, yet another. For the Marauders's Map inside Hogwarts I did the first one as two flying geese units. Look closely at the photo above, comparing the top 'The Marauder's Map' block with the bottom one. You can see the bottom one in the above photo has had two triangles carefully fussy-cut and pieced back together to make the square. I was pretty chuffed with the turnout if I do say so myself! 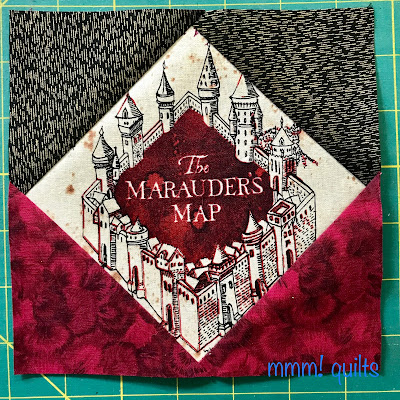 hey, wait a minute... It struck me that I could eliminate the horizontal seam, so I did some math, and voilà! Best part? That image fits nearly perfectly within the square.

The centre red square begged for what I call spirograph quilting.

Angela's ruler has really good grip too, and lots of lines to help align. I used a Sulky cotton (how I love their threads) 30 wt in the perfect red to match the fabric. Dot to dot went in the star points and the black star point reflections. I did a stars and loops meander in the 4-patches, and two of the background squares, matching the thread to the fabrics. 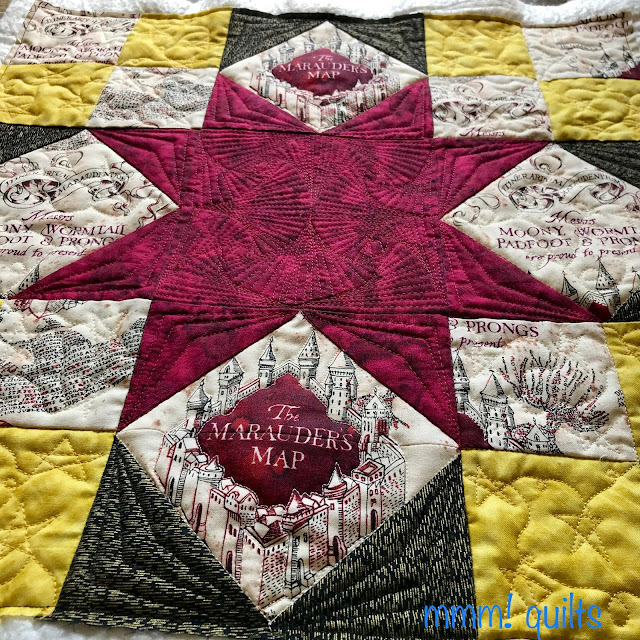 I carefull FMQ-ed the castle, which has given it a bit of a 3D effect.

Here's the back (I remembered to take a photo before assembling the cushion!) which shows the quilting better. You can also see the stitch in the ditch that was done to stabilize everything before doing the fancy stuff. I used Gütermann threads in the bobbin, a black polyester and a beige cotton. 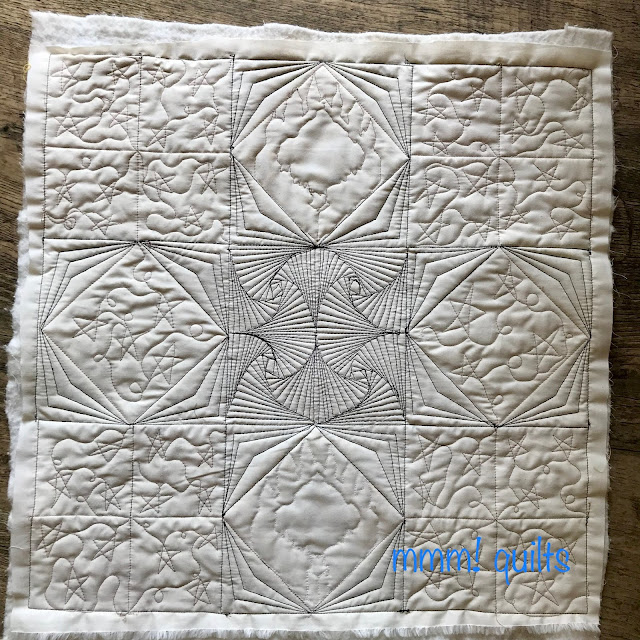 With Dayna's input, though she had no idea what she was giving input for, ha, I chose the Marauder's Map fabric as the binding. I always bind my cushions, gives them a nice crisp professional finish. 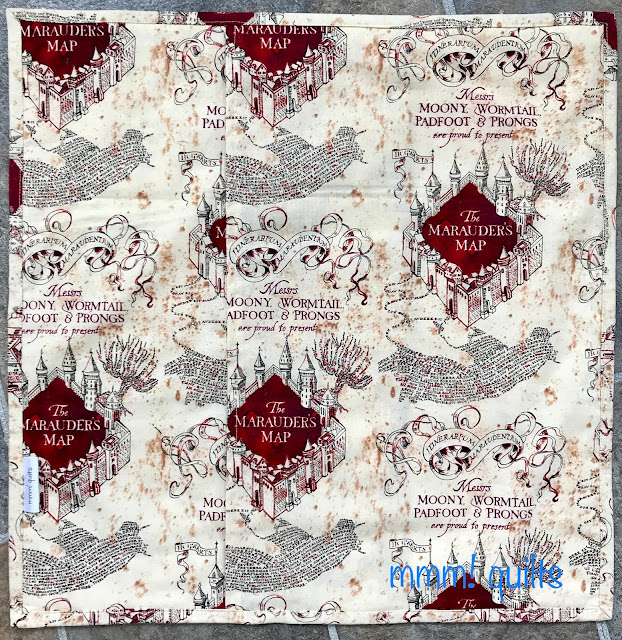 I wrote a message inside on the back of the front, for Dayna with the date etc. You can see my mmm! quilts satin label on the left side...my 100th! The pack is done, and another one has been ordered, this time with my name on the flip side. However, Ikaprint messed up, and for some reason just sent me another set of 100 like my first order. I contacted them immediately and they are sending me out the correct labels, double-sided as ordered. I like that kind of prompt customer service.

My other OMG is having my Oh! The Places You'll Go! pattern published by the end of the month. Fingers crossed... I have three more quilt designs to submit to the challenge before May 25, and an Island Batik quilt to make, not to mention finishing my third H2H quilt, so we shall see!

Here is the Slytherin cushion I made for Brady: 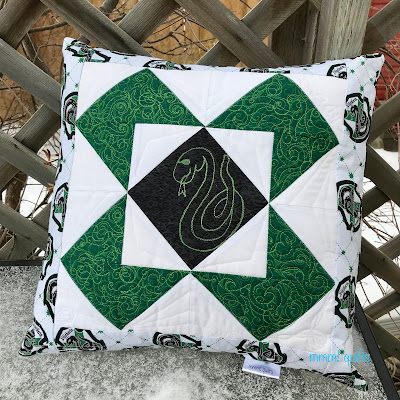 and the Game of Thrones one for Brianne. 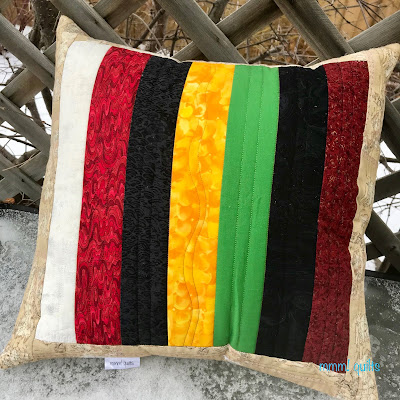 These two were the first ones in over 20 years of quilting that I did without binding, but it was due to having to make them both so quickly.