Well, I'm good, in that I am up to speed with the Sweet Star QAL, and I made this week's Tiny Tuesday block as well as one green one from March. I worked some more on my third H2H quilt, but didn't get the flimsy finished yet, so I'm bad there. I'm also bad because although I have nailed down my design (eeek--it's a star quilt) for this month's Island Batik challenge, coloured it in with the Twilight Chic fabric in EQ8, and got approval from my quilt-loving daughter, Dayna, I haven't cut into said fabric yet. But it's been ironed and will be cut into as soon asap. And!!!! I have a super-exciting announcement within this post! First here is the Sweet Star QAL Week 2 blocks, another set of four: 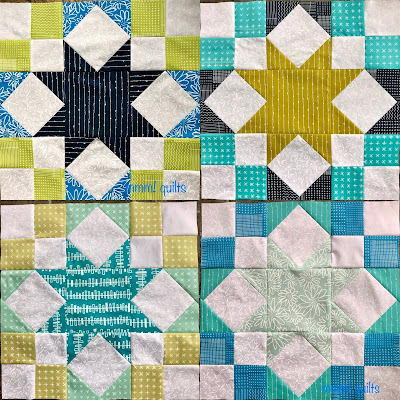 I am still loving this fat quarter bundle of Blueberry Park fabrics. I have used every one but one, so now will mix up the first 8 combinations. I will have a post this week about how I'm making these blocks, using less fabric and sewing less seams.

I decided this quilt is going to be a summer one for our bed. Seaside Rose is still the star of the summer quilts, and Summer Scents Mosaics is for the hot August nights, but this will be another. Maybe the June quilt, the month of my dad's birthday, and he, like me, loved blue. It'll be June 2020 as it won't be done for this June.

Next, here is this week's orange Tiny Tuesday block. I love it! It's Bear's Bow-Tie from Sally at The Objects of Design, and wow, do I love it. Her block is even published in Mary Ellen Hopkins' book, It's Okay if You Sit on My Quilt, as number 199! I had that book out of the library many moons ago; who knew I'd be making a block out of it, and that I'd 'know' the creator of the block and that I'd be a part of this amazing and enriching community. 😄 Her post is a pretty entertaining read, too. 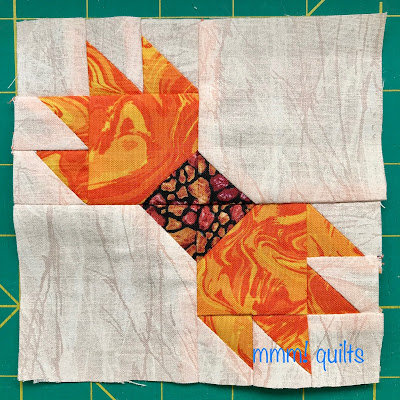 Sally said to perhaps use bear-themed fabrics, so here's mine. Bears like rocks, because rocks are in streams, and bears love to catch and eat fish. The pale orange background fabric is an old, no vintage one called Cracked Ice, of which I have very very little left. Polar bears live on the ice. The marble one? I got nothin'. It's a fabulous orange though isn't it? Paula Nadelstern.

I have all the April aqua blocks done, so now I'm travelling back in time to do March's green ones. I made the umbrella block: 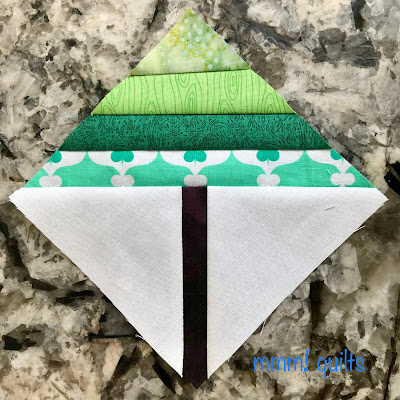 I was going to get all fancy-schmancy and add gentle curves to accentuate the umbrella, but then I saw the bottom string in my string box and I thought, with some careful placement, and then accenting the curves when I quilt the quilt, this may work!

Sewing has been a bit hampered this week due to the renovations, and due to completing one of my two OMGs for the month. That will be another post, but a glimpse of it was on Instagram. I've had to change up my sewing location yet again as it was calmer for a certain doggie to not be under the crashing, chainsawing and hammering. 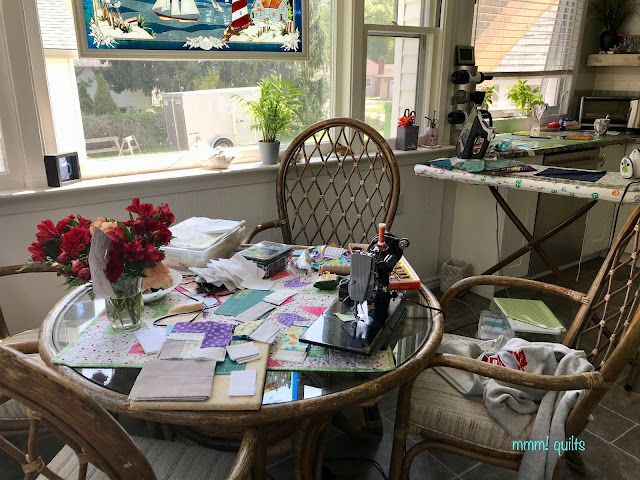 So remember I said we were going to put in two dormers for my sewing room upstairs? Well...as most renovations go, this one is not going according to plan, ha. The original 1947 rafters are 2X4, not up to code, so they are all having to be replaced, and we had to get a new LVL beam, as what was right in the peak of the roof that you attach the rafters to was... two pieces of plywood! Great in 1947, not acceptable in 2019. However, having said all this, our contractor is very pleased, as is MacGyver (See? I told you this was a solid little house, Sandra) that it is indeed solid, no rot, no evidence of any leaking, and he said the builders did not skimp out on anything when they built our house 72 years ago. Kind of like my little Billie, you see in the above photo, a 1947 Featherweight upon which I've been sewing the past few days. She's a solid little sweetheart, and quieter than my Bernina, no lie.

Back to my sewing room and dormers. If you look on the Instagram post I referred to, you'll see that a much larger window opening has been cut, where a much larger south-facing (yeah!) window will go, through which they are uploading and downloading (lol but it's true) the supplies and discards via a chute and rope system. I had lots of fresh air up there over the course of a couple of days!

The front middle section has now been all closed in, in preparation to begin the first dormer on Monday. Saturday morning there was a bunch of rain again, so they elected not to work, but to wait until Monday. MacGyver has become the contractor Dan's main man, something he is loving, as his first guy has taken the long weekend off. Doesn't hurt to work off some of the bill!
Were we not living in the house, they would have just taken the entire structure off, Dan said, but doing it in sections will amount to the same thing, just a little more thinking and planning and math involved. They sealed it up pretty good so we only had two small areas that some of that dratted not-needed rain could get in. Buckets to the rescue. Both MacGyver and I are really excited at how much space is up there just with tearing out the old stuff and tearing down the top floor level of the chimney. Bats be gone! Hang out in my oak or Linden tree thank you very much. I love you for eating lots of bugs but I don't want to share my house with you. You can read the bat story here.

And that, though it is exciting as all get-out, is not the exciting announcement I hinted at... 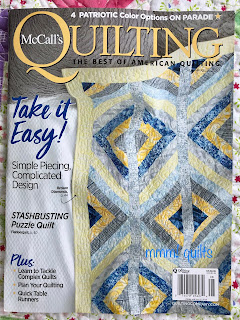 I've mentioned a few times about an upcoming publication of one of my quilts. Well I'm allowed to give you a preview, as subscribers are now receiving their copies of the July/August issue of McCall's Quilting!
Yes, I have a very special quilt (a huge one) in this issue, and here's a sneak peek I took of one of the pages within... 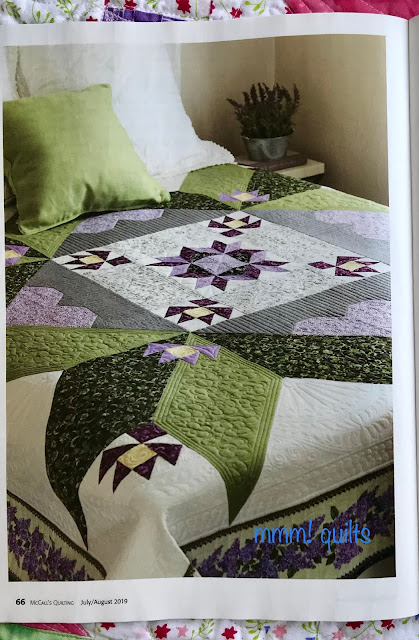 It should be available to purchase at bookstores and grocery stores around May 28, so I'll be back with more photos (you know I will!) and the back story of "Lilacs for Mother".